Editor’s note: This story is provided by Ameren Illinois

Ameren Illinois linemen and natural gas workers are true road warriors.  Whether responding to outage calls, performing routine system maintenance, re-building its infrastructure, or simply traveling between home and office, the company’s 3,000 field and administrative employees traverse Illinois highways and neighborhood streets to the tune of more than 30 million miles each year. 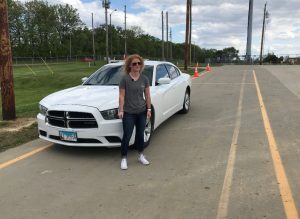 While providing its own employees with the tools to drive safely is a company priority, Ameren Illinois recently found an opportunity to extend the safe-driving message to teens.  Through the experience of one high school student, Ameren Illinois partnered with the Illinois High School and College Driver’s Education Association and Puget Sound Energy to create a unique safety education program for teen drivers.

In the summer of 2017, then 16-year-old Jordy Curtis was driving during a severe storm when straight-line winds blew power lines onto her car. Not knowing what to do, and fearful that her car might catch fire, Jordy panicked and exited her vehicle.  Luckily, the power lines around her car were de-energized. If the power lines had been live, she could have been severely injured or fatally electrocuted.  It was a scary incident and Jordy suffered from PTSD for months afterward.

But while painful anxiety might cause some to bottle up their emotions, Jordy fought through it and decided to share her story in an effort to keep others from repeating her mistake.  She approached co-workers at Ameren Illinois’ operating center in Champaign and asked them to do a demonstration of live power line safety at her high school.

Four of Jody’s classmates were paying close attention to the Ameren Illinois presentation that day.  A few months later, they experienced a similar accident and wires fell onto their car. Recalling the message delivered by Jordy and Ameren Illinois, the students stayed in their car and remained safe. The Illinois Department of Transportation says Illinois motorists strike more than 3,000 power poles each year – mostly related to distracted or impaired drivers.

In order to share Jordy’s story and to educate the public at large about wire-on-car safety procedures, Ameren Illinois hosted demonstrations for the media and invited a few driver’s education teachers to attend.  The teachers indicated there was an opportunity to incorporate downed-wire safety more comprehensively into the curriculum and suggested the demonstration would make a lasting impact on their teen-driving students. It was then that an idea was born to reach and influence as many teen drivers as possible by partnering with Jordy and the driver’s education community.

Ameren Illinois presented the concept to instructors attending regional meetings of the driver’s ed association.  The association was onboard with creating a curriculum module for students.  Ameren Illinois reached out to colleagues at Puget Sound Energy in Washington to inquire about utilizing a video they had produced on the subject.  The year-long project was unveiled at the beginning of the school year to more than 500 driver education instructors across Illinois.  The module features Jordy’s story and video, infographic, quiz and other learning materials driver education instructors can download and utilize in the classroom.

Thanks to Jordy’s bravery and passion for making a positive difference, young drivers will know exactly what to do in the event of a crash involving power lines.

The entire module is located at Amerenillinois.com/drivered.