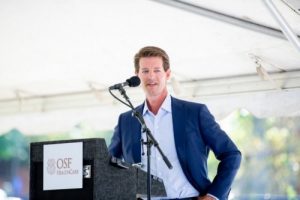 It’s estimated the new center will treat 600 new patients a year, with many now able to receive treatment locally instead of having to cross the river to St. Louis. RiverBend Growth Association President John Keller called the new OSF HealthCare Moeller Cancer Center the best example of a resurgence of growth and change for the region along the Mississippi.

Bishop Thomas John Paprocki from the Diocese of Springfield, presided over the blessing, a tradition for any new building or expansion in the OSF HealthCare system.

“Let us ask for God’s blessing this building, erected for care of the sick,” he prayed. He also sprinkled holy water throughout the structure, including the entrance where many will walk through the doors looking for hope. The center is named for Mike and Amy Moeller, who made the largest private donation of $1 million toward the construction of the center, and they pledged $150,000 for sponsorship of an annual golf outing that supports ongoing services. 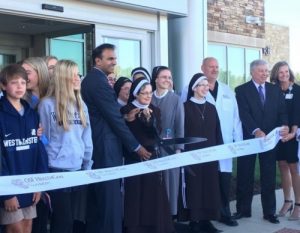 Moeller lost his father to cancer, but he recalled his dad often prayed with patients, something he, Amy and their four children pledge to do.

As he looked back toward the new building, he said,, “There is nothing in that building that is lacking but what will make this place special is you all. It’s the people. It’s the caregivers. It’s the sisters. It’s everybody in this community that’ll make this a special place.”

Radiation oncologist Dr. James Piephoff,  who has been at Saint Anthony’s Health Center for 16 years joked that he has waited a long time to see a new cancer center.

“This is a wonderful day. It’s been 199 months that I’ve been here at Saint Anthony’s and I’ve made the comment that I was going to give them 200 months and that was it. So, we made it,” he said with a smile and laughs from the capacity crowd.

“We don’t treat cancer; we treat the individual who has cancer,” Peiphoff said. “It is wonderful to now have a facility with everything under one roof that we need to seamlessly coordinate care.”

Sister M. Anselma, OSF Saint Anthony’s Health Center chief operating officer and a member of the Sisters of St. Francis of the Martyr St. George, the original founders of Saint Anthony’s, said the goal was to make the center a beacon of hope and planners visited cancer centers throughout the Midwest and sought input from cancer patients to design every detail.

They also have choices about the kind of environment they want to create while receiving chemotherapy.

“Our patients can choose all of these different elements between privacy, openness, light, darkness, TV, silence, reading, being in the healing garden versus being in the infusion center in a chair with the nurses. There’s all these different choices they have to make this experience as easy as possible for them,” she said.

President and CEO Ajay Pathak said the Moeller Cancer Center is part of OSF HealthCare’s investment in transforming health care in the River Bend. Pathak says cancer has impacted almost everyone so the community has felt passionate about supporting the project.

“We’ve seen a tremendous outpouring of support first and foremost by Mike and Amy Moeller for their generous contribution but also from key community leaders and businesses that have supported us so much from a fundraising standpoint to be able to get us to the point where we’re able to open the doors for our patients here in our community.”

After her tour she declared, “This place is heaven!”

She also said, “This place gives you hope,” and added her favorite feature is the option to receive chemotherapy in the healing garden or enjoy privacy in the infusion bays that can be adapted to whatever patients want in their experience.

“It’s beautiful. They’ve got a garden there … they’ve got a nice little area. It’s like on your back patio … your porch. You feel like you’re at home,” she shared. “You want to feel more like yourself. You’re not just at a hospital this and that, going through with people passing by. And, you’ve got your privacy (if you want it), you’ve got Netflix. It’s like sitting on your couch at home. It’s very homey — friendly and homey.”

Madison County is said to have the second-highest cancer rates in the state — topped only by those in Cook County.

PHOTOS, top down: Bishop Thomas Paprocki dedicates the interior of the new cancer center; Mike Moeller, whose family has donated the largest amount toward the facility, addresses the audience gathered Tuesday; and the ribbon cutting featuring executives, staff and key figures involved in the event.