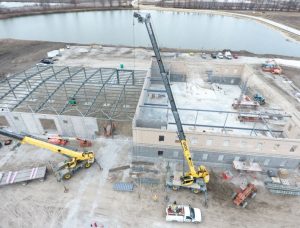 By working together many years, Federal Steel and Erection Co. and Illinois Electric Works built a great relationship — and several buildings.

When the latter company needed a taller roof added to its Granite City headquarters back in 1999, Federal Steel constructed it. FSE then returned six more times to build extensions for the same company’s headquarters, which now takes up 100,000 square feet.

An ironworker by trade, Darr became an estimator of an earlier company in 1987 and worked his way to general manager. After that business went bankrupt, Darr bought the assets and formed the current company, launching operations in East Alton. Today, he is president and sole owner.

“We’ve grown little by little over the years,” Darr said. “We used to be a small fish in a big pond, now we’re a big fish in a small pond.”

Both Hamil and Darr fondly recall projects they’ve done together for common clients, including a variety of large corporations. But one specific project for Alton Steel in 2017 stood out for the challenges involved.

“Most of the time they need substantially less than 100 percent. You add Variable Frequency Drive controls to take it down to reduce speeds and power consumption,” Hamil explained. An enclosed building to house controls needed to be constructed.

Because the project was being funded as part of an Ameren rebate program, it had a very short deadline.

“In February we identified the project — the deadline was the end of May. We had to acquire the drives, design-build the building, and get it functioning by the end of May,” Hamil said.

Federal Steel helped make it possible — and on time.

“It’s a twofold relationship,” Darr said. “We have been building buildings for Dale for his own company for 20 years. But we’ve also partnered up as a subcontractor and built for some of his customers.”

Federal Steel has a long relationship with many other companies, including Afton Chemical, Sun Coke, U.S. Steel and Phillips 66 Refinery.

“Our team is dedicated to quality, a safe work environment and a strong work ethic. We look out for each other and our customers. This is evident as 95 percent of our work is from repeating customers,” Darr said.

The company does about $20 million a year in revenue.

The fabrication facility is constantly upgrading with state-of-the-art equipment that cuts, drills holes, copes, lays out and blasts steel shapes, plates and weldments per the drawings and designs created in their detailing department. All the equipment for cutting, drilling and preparing beams, channels, plates and pipes are CNC-operated, which essentially eliminate human error. The steel is painted or galvanized, shipped to site and installed utilizing cranes by the Ironworker crews.

This story is among several in this month’s print edition focusing on Southwestern Illinois commercial contractors. For more, go to the Current Issue section at ibjonline.com