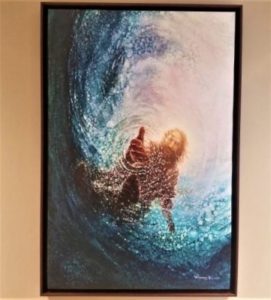 PHOTO: This image, “Jesus Through Water,” is part of the photo gallery of art in the new OSF HealthCare Moeller Cancer Center in Alton, by Southern Illinois artist Tracy Sayers Trombetta. BELOW: A centerpiece of the gallery, “Footprints in the Sand.”

Heather Jones spent Christmas of 2011, recovering from breast cancer surgery. She spent New Year’s Day, back in the hospital for another surgery to remove breast tissue when tests showed she still had some remaining cancerous cells.

Jones never wants anyone to endure what she did but the certified breast health navigator for OSF Saint Anthony’s Health Center knows that’s not likely. Jones had an aggressive type of cancer that also required chemotherapy and radiation. During her long walk alone to the radiation area, where isolation is required, her mind went to a poem by Mary Fishback Powers about faith and perseverance.

“At one point, I just remember that poem that when you are walking through the sand and he (Jesus) left footprints in the sand, at one point there was only one set of footprints and that’s when Jesus carries you,’ Jones recalled. “So in my mind, I felt every day I walked that hall, I had to take Jesus with me because I was alone.”

“All those radiation patients, when they walk this long hall and they see this beautiful mural of Jesus’ footprints, it’s going to help them feel so calm in that process and then just knowing the providential ability to find a local artist to put this on our wall was just amazing.”

That artist is Tammy Sayers Trombetta who spent most of her life in the Riverbend along the Mississippi but her landscape is of the ocean — specifically waves crashing onto the Yucatán Peninsula bordering the Caribbean Sea in Cancun.

That’s where Trombetta took a spur-of-the-moment trip in January and it’s where she became obsessed with taking photos of footprints in the sand. She soon learned, there was a reason.

“I was thinking, ‘What am I going to do with all these footprints?’ she said laughing. “But when I met with the art committee, I actually took some of my pictures with me and they just absolutely loved the photographs and the painting I had done.”

Trombetta had done small painting to scale to represent her vision for a 17 by 10 landscape along the corridor that will lead cancer patients to a new, state-of-the-art linear accelerator where they’ll receive precisely targeted radiation.

Trombetta joked she has never done such a large painting and because it was so physically demanding, she welcomed some initial help from her brother who serendipitously was heading through town from Pennsylvania to Texas. The final product is a texture-filled sunny beach with glistening waves rolling in with footprints in the sand and the ‘phrase … “It was then that I carried you.”

The significance is not lost on Trombetta because her father died from cancer 26 years ago. He had been a patient at Saint Anthony’s and he was her hero.

She reflected, “I talk to him every day still. Throughout this entire process, I’ve just felt like he’s kind of been on my shoulder guiding my way and saying this is what I needed to do so I felt like I had someone there with me the whole time.”

The tactile photo includes real sand from Trombetta’s trip to Cancun. Creating something unique to the touch is part of Trombetta’s signature style.

“I love when people walk up to my paintings and try to touch them and say, ‘How did she do that?’ I just love that reaction.”

But, what started out for Trombetta as simply a project turned into a magically miraculous experience. She only realized that when she heard Jones speak about the experience that inspired the art work.

The new cancer center will be attached to the hospital. When it opens Oct. 8, it’ll feature 17 photographs, five paintings and five examples of 3D art from local and regional artists. Sister M. Anselma, who led the art committee that reviewed 1,200 submissions says she wanted patients to feel at home.

She added, “What better way than in a setting that reflects our community and is created by our own neighbors.”