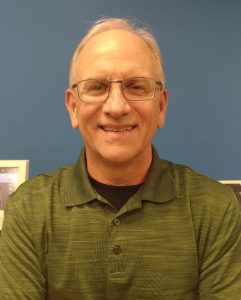 Wright, a Cahokia native, has been serving the Greater Alton/River Bend area for 34 of those years, out of the same offices at 2865 Homer Adams Parkway.

Wright began working at the office in 1985 after graduating from The University of Houston College of Optometry in 1984. He purchased the practice in 1988, and it was acquired by Performance Eyecare in 2016. Wright practices in all areas of optometry, including pediatric, geriatric and general family practice, as well as prescribing glasses and contacts. It’s a profession he was drawn to in his college years.

“I met my mother’s optometrist, and it seemed like a really interesting profession,” said Wright. “I just enjoy the whole process of being able to help people see better.”

Over the years, he says, there’s been an enormous improvement in what optometrists can do for their patients.

“The scope of practice has expanded greatly,” adds Wright. “Just being able to prescribe medication – when I started, if someone even needed eye drops, you had to send them somewhere else.”

Performance Eyecare owner, Dr. Dirk Massie said of Wright, “He takes his time to get to know his patients on a personal level and deeply cares about not only the health of their eyes, but for their entire well-being.”

Wright currently works three days a week at Performance Eyecare. He and his wife Starlet recently moved to Pevely, Mo., in order to spend more time with their family. The Wrights have three children; among their seven grandchildren are 2-year-old triplets. He and his wife continue to be active in The Church of Christ in East Alton, where Dr. Wright is an elder.

“We just enjoy getting away and enjoying life,” he says.