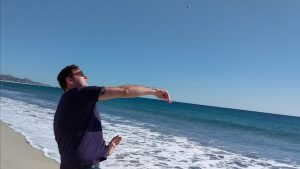 Matthew Gabalis threw his ring into the ocean. It washed back into his life in ways he could never have dreamed.

Such are the currents of life. They drift this way and that, and you never know the people who will touch you along the way, at home or abroad.

I can speak metaphorically about all this, since I represent about one-third of the story. Gabalis is another third. And a man neither of us knew before, Luis Diaz, is the remainder.

In a nutshell, Gabalis “lost” his high school class ring, Diaz “found” it, and I brought them together.

As luck would have it, I’m having my 45th class reunion this year. As a proud member of the 1974 Class of Edwardsville High School, I’m also the moderator of our class’ Facebook page. I check it from time to time to see what’s up. 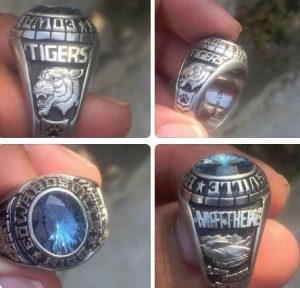 It was in that role that I discovered a message from Mr. Diaz on July 29. Diaz, who was raised in the United States and went to college in Wisconsin, now lives in San Jose del Cabo on the Baja peninsula of Mexico. Diaz wrote to say that the ring was discovered along a sandy stretch just north of the popular vacation destination spot Cabo San Lucas. The area is where the Gulf of California meets the Pacific Ocean.

Diaz didn’t actually find the ring, but he quickly came into possession of it after a friend who didn’t speak English found it and turned it over to him.

The ring was quite a mystery. From the wording, it was obviously an Edwardsville High School class ring with the name Matthew and the initials MSG on it. There was a Tiger mascot featured, but there was no year. It was obvious — or seemed so — that the ring had been lost by someone on vacation.

“I just wanted to make sure it got back to the person who had it,” Diaz told me in a call from Mexico. Diaz said he contacted Josten’s, the company that made the ring, but couldn’t get anywhere.

One element of the ring was most puzzling — the engraving of a classic Chevrolet, with the words “Low Rider.” Those customized cars were made popular in the 1970s and beyond on the West Coast.

Diaz used Facebook to send out a blanket message to several people connected to Edwardsville high schools in the United States. I just happened to be the first one who answered the message.

I was at first skeptical of the international overture. I hear about scams enough that I don’t trust just anyone. So, I messaged Diaz back and asked him to send me a picture. He sent four of them — various angles of a class ring from which a true owner could identify a likely cherished possession.

Once I was convinced that Diaz had a ring actually from my high school, I did what most people would do — turned back to Facebook, where everybody knows your name (and an awful lot more, judging from posts).

I posted the pictures and a recap on the town page called, “I Grew Up in Edwardsville.” I watched, amazed, as my Facebook post was shared hundreds of times during the course of an evening. Within six hours, social media sleuths had their man.

Breann Towner, a member of the EHS Class of 2005, remembered a classmate named Matthew S. Gabalis, who lived in Glen Carbon. She reached out to him, then sent me a message of confirmation.

I had Gabalis on the phone the next day.

The ring, it turned out, had an interesting back story from the very beginning.

How it came to be ‘lost’

“It is my ring,” Gabalis said. “I purposely chucked it into the ocean. I didn’t want it.”

Events occurred in the middle of January this year. Gabalis had gone to a resort in Cabo San Lucas to celebrate the birthdays of two friends. He took the ring along so he could ritually throw it into the ocean.

“It was kind of a Mount-Doom-Lord-of-the-Rings-situation because this ring is cursed,” he said.

The ring was an annoyance from the day he received it. The low rider image was a red herring — a mistake that resulted when Gabalis improperly filled out the order form. The mistake made it look like Gabalis was a fan of low rider vehicles. He wasn’t.

“I drove a van in high school,” he said.

Enough of his Midwestern friends made fun of the ring that he never got over the annoyance. One day, at the age of 18 and “in a fit of pique,” he threw the ring down a register vent at the family house in Glen Carbon. He thought it was gone for good. It wasn’t.

“My brother found it way later and embarrassed me with it again,” Gabalis said.

This year’s Mexican vacation seemed like the perfect time to deep-six the jewelry for good.

Gabalis walked out on to the beach and heaved the piece into the water, with one of his friends filming the event. He shared a screenshot from the video, showing the cursed ring in flight.

“We were all involved in the whole ridiculousness of it,” he said. “I was chronicling that I was getting rid of it forever. I was wrong.”

“Not in a million years” did he think he’d hear back on a ring that he purposely threw away — not once, but twice.

Gabalis now lives in St. Louis and works at the National Archives as a reconstructor of lost records — which strikes both him and me as irony given the recent turn of events.

At the end of August, Diaz and Gabalis had been in touch with each other, with one planning to ship the ring back, and the other offering to pay for it. Gabalis said it was the least he could do, and he feels kind of sheepish about the whole thing. Fellow Facebook followers had a field day with the story, and Gabalis played along with them.

“I’m glad everyone thinks it’s funny and not rude and that they went to the effort of finding a ring for some doofus that got rid of it on purpose. The only one not happy is my mom circa 2005 who paid for it,” he said.

The ironies to this story didn’t stop with the ring. Gabalis’ father, Steve, is a 1974 classmate of mine. The younger Gabalis knew my wife from the attendance office where she works at Edwardsville High School, and he knew my oldest son, who was his boss at a movie theater back when they were both younger. We both agree, despite oceans between countries, it’s a small world.

PHOTOS: Matthew Gabalis throws his class ring (visible at top of photo) into the ocean off Cabo San Lucas, Mexico. The ring’s owner was found after the ring finder sent out the series of photos, also shown here, looking for the owner.