By AUSTIN BERG, The Center Square

They define the state’s landscape and mirror its culture. They are resilient, useful and hearty. No other state produces more. Three-quarters of Illinois, nearly 27 million acres, is farmland. Around 10 million of those acres are dedicated to soybeans. 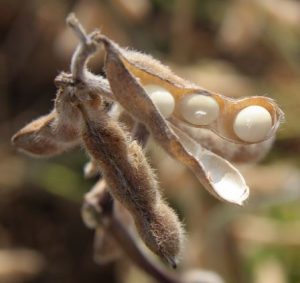 But how did they get here? Nobody knew for sure. Until now.

Thanks to local researchers, the journey of the first soybeans ever planted in Illinois has come into clear view, shedding light on a crop that now sits at the center of global geopolitics.

The story involves the California gold rush, the brother of an Illinois governor and 17 Japanese sailors lost at sea.

In 1850, a North American freighter rescued those shipwrecked sailors after they were stranded in the Pacific Ocean for 50 days. Protected in their food storage were seeds for “Japanese Peas,” or soybeans. The sailors and their freight were taken to San Francisco.

It was there that the seeds came into the possession of Dr. Benjamin Edwards, who left his Alton home for San Francisco in pursuit of the California gold rush. Dr. Edwards, the brother of former Illinois Gov. Ninian Edwards, came upon the seeds while buying provisions for his journey back to southwestern Illinois. He took the seeds back to Alton and gave them to a friend, James Lea.

Lea planted the seeds in his garden in 1851. It was the same year that Abraham Lincoln – fresh out of the state legislature – took his first significant case as a lawyer, representing the Alton & Sangamon Railroad.

These were the first soybeans grown in Illinois soil. The Illinois Historical Society planted a plaque in Alton last month, making the story official.

Illinois’ 43,000 soybean farmers have had a tough year. Awful weather delayed planting and is causing uncertainty about yields. But the bigger bear is an American trade war with China, to which about 60% of Illinois soybeans are exported each year. Those exports have practically stopped in the wake of retaliatory tariffs. Sales of U.S. soybeans to China in the first half of 2019 fell to their lowest level in more than a decade, according to Bloomberg News.

President Donald Trump called into a panel at the Farm Progress Show in Decatur last week, asking Illinois farmers to stand with him despite their struggles.

“I could make a quick deal with China and could carry that deal into a tremendous amount of agricultural products. I could do it immediately. I could be a hero, easily win the election and that would be that,” Trump said.

“But that would be the wrong deal. Or I can do it the right way, which should have been done over the last 35 years, and do it the way we are doing it now. Stay the course.”

That kind of braggadocio is uncommon in Illinois’ agricultural community.

Whatever pain U.S. tariffs may be causing in China, it’s unclear whether Communist Party of China leadership will buckle under pressure and make a deal, as Trump promises, or simply wait out Trump’s presidency.

In the meantime, the federal government is handing out $16 billion to farmers to cover some of their losses. U.S. Secretary of Agriculture Sonny Perdue correctly diagnosed the problem with that strategy.

“I said, ‘Mr. President, these are growers. … Think of them as builders. … It’s in their DNA to grow and sell stuff, and that’s what they want to do,” Perdue said in Decatur. He said he asked the president to imagine doing the work necessary to prepare to build a resort on a beautiful property, only to be told that he couldn’t, but that he would be paid not to.

“I think he kind of understood that,” Perdue said.

In short, the future surrounding Illinois soybeans has never been more uncertain.

But their amazing past has never been more clear.

Austin Berg is a Chicago-based writer with the Illinois Policy Institute who wrote this column for The Center Square. Austin can be reached at aberg@illinoispolicy.org.