Hundreds of union members affiliated with the Greater Madison County Federation of Labor AFL-CIO marched Saturday in the annual Labor Day Parade, which this year was held in Wood River and East Alton.

Some 38 unions are affiliated with the federation and around 20 locals were expected to participate. The events kicked off at 10 a.m. at the Wood River Roundhouse and culminated with a march down Wood River Avenue to the Wiltshire area of East Alton. It was the first time the event has been held in that area. Traditionally it has been held in Alton.

Joe Silkwood, mayor of East Alton and a Democratic candidate for Madison County auditor, was the parade marshal. Many other elected politicians and those running for office were in the parade.

After the march a large picnic was held at Gordon Moore Community Park in Alton. Federation President B. Dean Webb said 2,000 wristbands were given out for participation at the picnic by union members and their families. A round of softball games that began earlier in the week was concluded at the picnic.

A much larger parade will be held next Monday, on Labor Day itself, in downtown Granite City starting at 10 a.m. 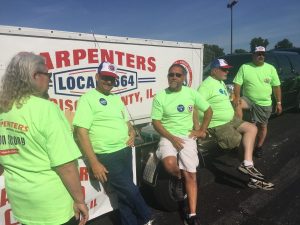 Members of Carpenters Union Local 664 in Wood River wait for the parade to start on Saturday. 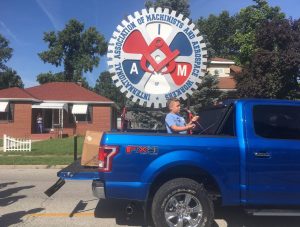 Family members were again a big part of the parade, with this youngster riding with the International Association of Machinists and Aerospace Workers group. 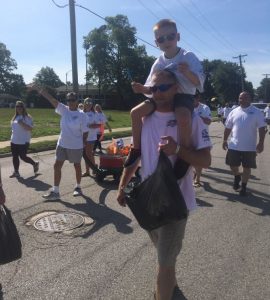 Laborers Local 338 was among those represented. IBJ photos by Dennis Grubaugh