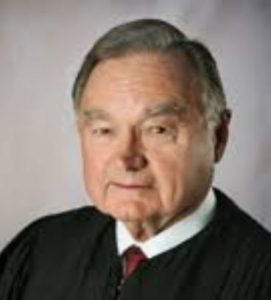 The Supreme Court will hear arguments in two cases starting at 10:30 a.m., on Wednesday, Sept.18, in the Hatheway Cultural Center, located at 5800 Godfrey Road, Godfrey.

“Moving beyond the courthouse to hear arguments at other locations throughout the state has become an integral part of the Court’s ongoing efforts to educate the public on the critical work we do. At a time when so much of government seems so erratic, it is especially important for citizens to understand the vital role played by the judicial system in protecting the foundations of our democracy and affirming individual rights and responsibilities,” Illinois Supreme Court Chief Justice Lloyd A. Karmeier (shown) said.

“Few things bring that lesson home as powerfully as witnessing an actual court hearing. We recognize how hard it is for most people to make it to Springfield to attend a regular session of the Supreme Court, so we have resolved to bring the Court to the people on a regular basis through proceedings like this one. It seems to be catching on. In fact, the Lewis and Clark proceedings promise to be our most popular so far. We are expecting more than 900 attendees, including an especially high number of local students. My colleagues and I are looking forward to welcoming them in Godfrey next month.”

The upcoming arguments at Lewis and Clark Community College will be the Court’s first road trip since March 15, 2018, when arguments were heard at the University of Illinois at Urbana–Champaign.

Students and teachers from local schools have been invited to participate in the September 18 program either by attending the arguments live, or watching via a live stream at https://livestream.com/blueroomstream/events/8787968.

“By bringing the live court cases to Lewis and Clark Community College, the Illinois State Supreme Court is modeling democracy and the rule of law in action for students and the community to witness,” Lewis and Clark President Dale Chapman said. “This is a very unique and powerful lesson to witness, and we are thrilled to be partnering with the Supreme Court to provide this opportunity for our area residents.”

A limited number of public tickets for the event are available. Contact John Lupton at john.lupton@illinoiscourthistory.org to request tickets. Those who have reserved tickets are
asked to arrive early as doors will open at 8:30 a.m. and all guests must be seated by 10 a.m. A question and answer session will follow the oral arguments.

The Supreme Court on Sept. 18 will hear arguments in the cases of People v. Morger and Dew-Becker v. Andrew Wu. Legal briefs in both cases have been posted to the Court’s website at http://www.illinoiscourts.gov/SupremeCourt/Docket/default.asp.

In People v. Morger, the defendant was convicted of criminal sexual abuse and aggravated criminal sexual abuse and sentenced to a term of probation. A condition of the defendant’s probation is that he cannot access “social networking websites,” as defined in the Illinois Criminal Code of 2012. The issue in this case is whether this condition of probation violates the free speech clause of the first amendment.

The defendant is arguing that this condition of probation violates the first amendment in light of a recent U.S. Supreme Court decision, Packingham v. North Carolina. In Packingham, the U.S. Supreme Court struck down a North Carolina statute that banned registered sex offenders from accessing commercial social networking websites, concluding that the statute “enacts a prohibition unprecedented in the scope of First Amendment speech it burdens” and “bars access to what for many are the principal sources for knowing current events, checking ads for employment, speaking and listening in the modern public square, and otherwise exploring the vast realms of human thought and knowledge.”

The State is arguing that the Packingham case did not involve probationers and that because probationers may be subject to restrictions on their constitutional rights, this condition of probation does not violate the first amendment.

The Dew-Becker v. Wu case involves a bet placed between plaintiff and defendant through the fantasy sports website FanDuel. The plaintiff filed a small claims action against defendant seeking to recover $100 that plaintiff lost as a result of the bet. The plaintiff’s claim is based on the Illinois Loss Recovery Act, which allows “[a]ny person who by gambling shall lose to any other person, any sum of money or thing of value, amounting to the sum of $50 or more” to “sue for and recover the money or other thing of value in a civil action against the winner thereof.”

The trial court ruled that the Act does not allow recovery when the bet is conducted through a third-party website, such as FanDuel, rather than a wager directly between two people. The appellate court affirmed the trial court’s ruling.

The plaintiff is arguing that the plain language of the Act does not contain any exclusion in a case where the wager is facilitated by a third party such as FanDuel.