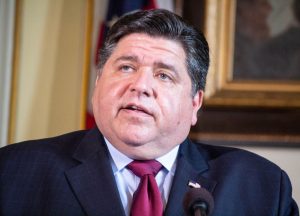 The Democrat also touted a bill which requires insurers to cover the cost of medically necessary epinephrine shots for children, and once again said he was open to signing a “stronger” bill pertaining to the emissions of ethylene oxide, a known cancer-causing chemical, in Illinois.

House Bill 889, signed Tuesday, requires insurance companies to cover long-term antibiotic therapy, office visits, testing and treatment for tick-borne diseases such as Lyme disease. It takes effect immediately and opens the door for coverage of experimental drugs if they are federally approved.

“With this new legislation, Illinois is declaring that insurance can no longer put up barriers against those living with Lyme disease,” he said.

Rep. Daniel Swanson, a Republican from Alpha, was the House sponsor of the bill, which passed unanimously in both chambers.

“Illinois is one of the leading states with moving forward with mandated insurance,” he said. “We spoke to people in Arkansas, Michigan, Missouri, all across the nation of people saying how did you do this? Well, it takes a team. It takes the 101st General Assembly, the House and the Senate to push this forward.”

Jennifer Russell, director of the Illinois Lyme Association, said her daughter, Laura, is nearing the end of several years of treatment for Lyme disease.

“This legislation is pivotal in the state of Illinois,” she said. “Many in Illinois are suffering from tick-borne illness. Those with state-regulated insurance or private pay are in most cases only receiving 21 days of treatment. … Many are losing their homes, their businesses and their pensions to try to pay for the continued treatments, and this legislation provides them with desperately needed options.”

Rep. Jonathan Carroll, a Northbrook Democrat, was the sponsor of the bill to expand epinephrine coverage to all persons 18 years of age and younger beginning Jan. 1, 2020.

“We are now on the forefront of food allergy safety in Illinois,” he said.

Pritzker noted the cost of an epinephrine injection, known commonly by its brand name EpiPen, has risen 400 percent in recent years, now costing close to $700 without insurance, and the medication expires each year.

“To a child who cannot afford an EpiPen, one peanut, one bee sting, one exposure to latex can mean anaphylactic shock and potentially death,” he said. “That’s unconscionable.”

Pritzker also responded to questions about ethylene oxide emissions, another public health issue that has made headlines in recent weeks because of a public fight to prevent Sterigenics, a medical supply sterilization company in Willowbrook, from being able to reopen.

Pritzker was asked about the potential of a special session regarding a bill to ban ethylene oxide emissions, and said he was looking for a stronger bill than one filed by Republican state Sen. John Curran, of Downers Grove.

“We’re continuing to work toward it. You know, as I’ve said, I will sign the strongest legislation that they put forward. I know that Senator Curran has put something forward, but as has been discussed, that legislation has flaws in it that wouldn’t work,” Pritzker said.

The governor noted the bill sponsored by Curran refers to companies holding permits, which Sterigenics would no longer need and thus would not be affected.

“So we need to have a stronger piece of legislation. I have not heard from (House Republican) Leader (Jim) Durkin about his views on what the legislation should look like. But again, I think we’re all open to a stronger version of the legislation that they already put forward. And that I signed.”

PHOTO: Gov. J.B. Pritzker signs a bill and addresses reporters at a news conference in his office Tuesday in Springfield during which he took questions about two new bills to expand insurance coverage for EpiPens and Lyme disease treatment. (Capitol News Illinois photo by Jerry Nowicki)

Law will allow students to vote during school hours 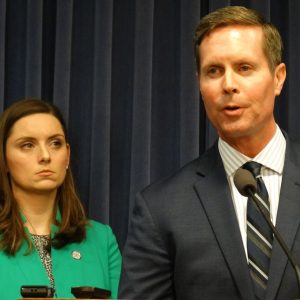 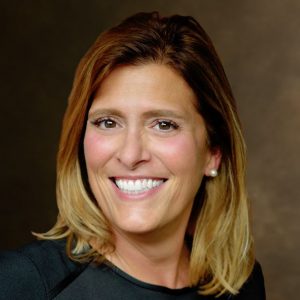 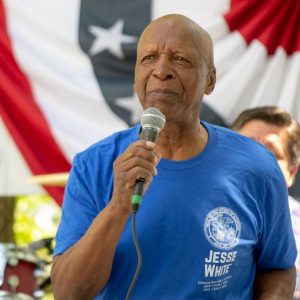