The addition of a new specialty surgeon gives HSHS St. Elizabeth Hospital a firm hand in a growing medical niche. 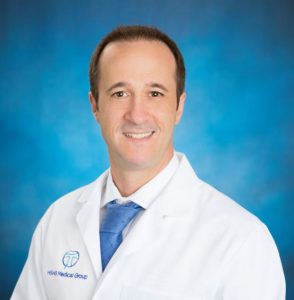 Board-certified hand surgeon Dr. Andres Lerner recently joined the staff of HSHS Medical Group in O’Fallon, Ill. During an interview, he offered perspective on work-related, repetitive injuries, carpal tunnel syndrome and advanced surgeries in which he is involved.

Hand surgery is a “young field” that rapidly grew after the second World War when many soldiers were returning with severe extremity injuries.

“It’s not that old of a discipline when you think about it, when compared to the other ones,” Lerner said. And it’s an important treatment. “Hands are like our eyes – everybody uses them.”

Lerner downplayed one area of concern — that technology or digital use of a cellphone are a contributor. People are simply more aware of the condition.

“The truth is, computers don’t cause carpal tunnel. If that were true, the cases would have spiked with the invention of the typing machine.”

It is true that genetic makeup has a lot to do with such a syndrome. There is a subset of people with little keyboard use who will have symptoms of carpal tunnel while others that type all their lives never have them.

“Some of us are born with bones and soft tissues of certain proportions and shapes, and a subset of the population happens to have a more sensitive peripheral nerve system – specifically to pressure. They have nerves or tendons that are bigger and bone tunnels that are smaller,” he said.

A flare-up of sensitivity can be caused by age, use of tools that stress the hands, diabetes and endocrine conditions.

Lerner said he’s treated teenagers but more commonly sees people in their 30s and up, both men and women about equally.

Certain tradespeople who use vibrating tools or experience repetitive impact to the hands are more commonly afflicted. Think what a jackhammer does, for instance.

Industry has started to respond to the situation by implementing ergonomic changes and other alternatives to relieve stress.

“Companies would much rather provide the accommodations than have a worker take time off,” he said.

Pain symptoms include numbness or tingling involving the thumb, index, middle and half the ring finger on the palm side of the hand.

Sufferers describe a “difficult to put in words” sensation. The hand feels heavy, tight, swollen, burning or cold, or clumsy, or there is difficulty making a fist.

All of this can be intermittent or follow a pattern.

“Most people ignore them as part of normal life but by the time the symptoms are significant, they’ve actually been there for a long time,” he said.

Lerner has used minimally invasive surgeries to correct corporal tunnel syndrome, with great results. The process is to longitudinally divide the transverse corporal ligament, allowing it to open about a centimeter, decreasing the pressure inside the tunnel of the wrist. Surgery takes seven to 12 minutes.

“It requires two small incisions that don’t require sutures to close. I use Band-Aids. Most patients are using their hands that night,” Lerner said.

Non-surgical alternatives include treatments such as therapy, splinting and stretching exercises.

A decision about surgery boils down to two things —quality of life and nerve function. If there is no loss of function, the patient has the option to undergo surgery or not.