Ibroscheva’s primary responsibilities in the associate provost role will include academic planning, assessment and accreditation.

Her role with the university was developed during a previous, 13-year tenure as a faculty member in the Department of Mass Communications, including service in such leadership positions as department chair and graduate program director. She returns to campus after serving Webster University as associate dean at the School of Communications since 2017.

“The search process demonstrated that there is genuine excitement to have Dr. Ibroscheva back as a campus collaborator and leader,” said Cobb. “I have the utmost confidence in her abilities to make a significant and meaningful impact in the Office of the Provost and for the university. She is a true teacher-scholar. Her commitment to student-centered education and quality, and her recognition of the importance of research and scholarship will be true assets.”

Her previous roles on campus and her experiences will allow her to lead collaboratively and be successful in this supporting role for all of our academic units, Cobb said.

“I sincerely appreciate the search committee, co-chaired by Dr. Joel Hardman and Dr. Mary Weishaar, for their time and thoughtful work in supporting this search process.”

“I am incredibly excited to return to SIUE, and once again experience the positive energy of the students, the many talents of faculty, and the genuine commitment of the staff,” added Ibroscheva. “I am confident that with the collective will and combined effort of the entire University community, we can move SIUE to new heights in innovative education and excellence in teaching and research. As associate provost, I hope to contribute to the University’s mission by helping develop new and exciting programs that further solidify SIUE’s position as a regional leader preparing students to tackle and solve the challenges of tomorrow.”

Ibroscheva’s SIUE tenure began in 2003 as an instructor in the Department of Mass Communications, where she developed and taught new undergraduate and graduate level courses. She later climbed the academic ranks, departing in 2017 as a professor and chair of the department to advance as a high-level administrator.

Under Ibroscheva’s leadership, SIUE’s mass communications master’s program experienced notable growth in reputation and academic rigor with increased enrollment and graduation numbers. As chair, she also saw the department through a re-accreditation site visit in 2016, and increased its commitment to serving its diverse student population with a focus on fostering an academic atmosphere of collaboration, respect, and the pursuit of innovation and excellence.

The Bulgaria native is a prolific scholar with significant research achievements in her areas of interest, which include international communications, specifically, media developments in Eastern Europe. Her research has been hailed as groundbreaking and original, and has been widely cited in media and cultural studies of Eastern Europe. She has published more than 40 articles in peer-reviewed journals. She is author of Advertising and Post-Socialism: Women, Media and Femininity in the Balkans, and co-editor of the most recent volume on female politicians and media around the world entitled, Women, Politics and Media: Perspectives from Nations in Transition.

Ibroscheva is the recipient of numerous internal and external grants and awards, including a 2019 research grant from the National Communication Association, the SIUE College of Arts and Sciences’ prestigious William and Margaret Going Endowed Professorship Award in 2015, and support from the CAS Targeted Funding Initiative for 2017 Mass Communications Week: “Diversity Amidst Adversity.”
In 2005, Ibroscheva earned a doctorate in mass communication and media arts from Southern Illinois University Carbondale. She had previously completed a master’s in journalism from SIUC in 1999. Her bachelor’s in journalism and mass communication/English was achieved in 1997 from American University in Bulgaria, Blagoevgrad. 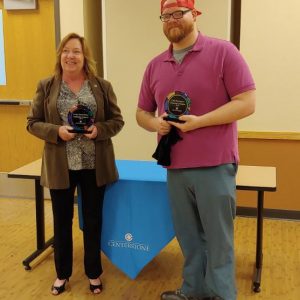