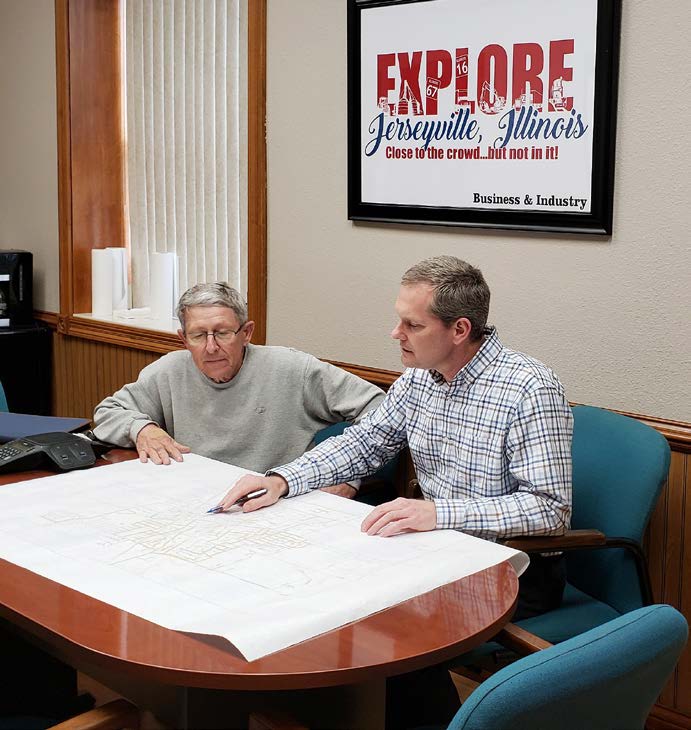 Jerseyville’s decision to hire a city native lends some perspective to the significance of a planned business park at the city’s outskirts.
Bob Manns was selected as the new public works director by the Jerseyville City Council. He officially stepped into the role June 1.
“This is a new position,” Jerseyville Mayor Bill Russell said in a statement. “We had a city engineer and a supervisor of water and sewer departments in the past. Those positions were vacant, and we were looking at how to best fill them keeping our long-term vision for growth in mind. We decided to create a Public Works Director position, and we knew we wanted someone in that position that had a solid engineering and planning background as well as a working knowledge of local, state and federal funding sources for the projects we have coming.”
Manns knows Jerseyville, and he knows how to advise the community as it continues to grow, the mayor said.
Mid-American International Gateway is a multi-million-dollar, 1,400-acre rail-served logistics park development underway east of the existing Kansas City Southern rail line that passes through rural Jerseyville on its southeast side near Crystal Lake Road.
Manns will be directly involved in the long-term planning of all the city’s projects, including the continued rollout of the Mid-American International Gateway development, Russell said.
A 1989 Jersey Community High School graduate, Manns received his Bachelor of Science in civil engineering in 1993 from University of Illinois at Urbana-Champaign. Acquiring his Illinois Professional Engineer license in 1998, Manns obtained his Missouri Professional Engineer license in 2017.
In late October 1996, Manns joined Heneghan and Associates, P.C. He assumed the role as the firm’s president in June 2013, when founder Dean Heneghan retired.
He also serves as the president of Jersey School District 100’s Foundation board, a role he has held since 2015. Manns is a long-standing member of the Jersey County Business Association as well, serving as its chair in 2013.
He and his wife Kelly have four children ranging from 17 to 24 years old.