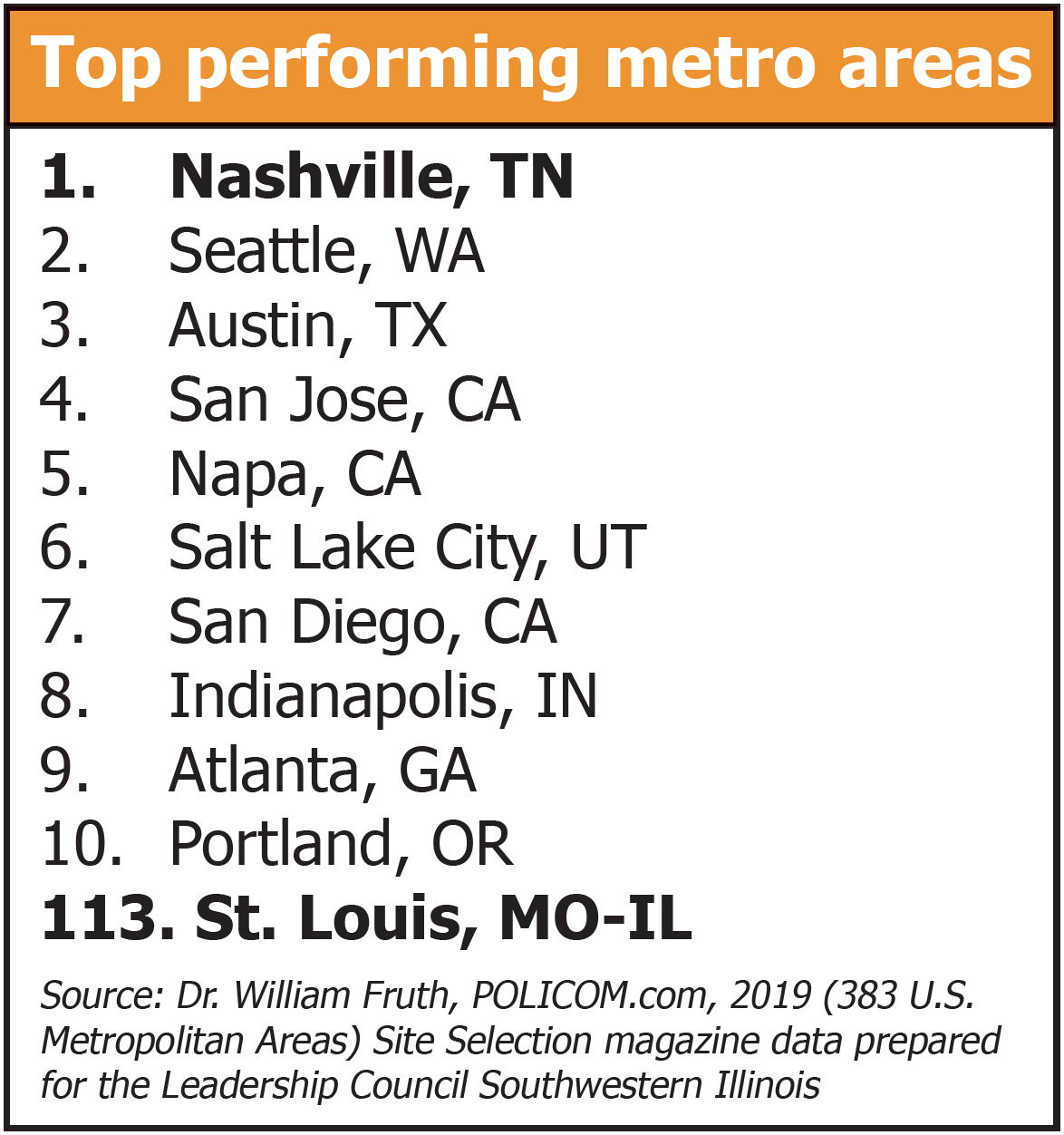 By DENNIS GRUBAUGH
What do prospective companies want in a community? They want workforce skills, transportation infrastructure, and quality of life.
What they don’t want are politics and lack of responsiveness.
Southwestern Illinois leaders got some rare insight into what firms everywhere are looking for in the way of development potential during a two-day visit by the executive vice president of Site Selection magazine.
Drawing the attention of the prominent international business publication is a coup, and locals didn’t waste the visit — gladly highlighting opportunities that exist in Metro East.

The guest of honor for the Leadership Council Southwestern Illinois was Ron Starner, executive vice president of Conway Inc., which operates the magazine and many related ventures.
The publication covers corporate real estate and economic development and is sent to almost 50,000 domestic and international high-profile site selectors and companies.
“Corporate real estate really is our heartbeat,” Starner said. “It’s the foundation of the publication because that’s our readership. We have over 45,000 ‘qualified subscribers.’ You have to be involved in some aspect of decision making at a company in order to receive it.”
About 60 percent of those 45,000 would be executives at manufacturing companies. A majority of those companies employ 100 or more workers, he said.
Starner has been with Conway Inc. for 19 years and serves as editor of the TrustBelt Report and lead organizer of the annual TrustBelt Conference. He also writes extensively for Site Selection and Conway’s Custom Content Publishing Division.

The TrustBelt report offers news and analysis on corporate real estate and economic development activity throughout the Midwest. This includes content on Michigan, Ohio, Indiana, Iowa, Illinois, Wisconsin, Minnesota, North Dakota, South Dakota, Kansas, Nebraska, Missouri and Northern Kentucky, along with Western New York and Pennsylvania.
Starner’s background in is journalism, with degrees from Liberty University in Virginia and University of South Florida, Tampa.
Site Selection magazine debuted in 1954. Ninety percent of its advertisers are economic development organizations, of which Leadership Council is one, as are the Regional Chamber of Commerce in St. Louis, the state of Illinois, under Intersect Illinois, and World Business Chicago, another public-private regional business group.
In recent years, international circulation has been going steadily up, with a fair amount of subscribers in China, the United Kingdom, France and Germany, among others.
Starner is mostly involved in the editorial side of the company, with two primary roles — one as a writer and editor, the other as chief of the company’s custom content division, which produces a series of annual economic development guides for state economic development organizations, including in Illinois.
He was invited by the Leadership Council to present a specially tailored PowerPoint on many topics of development interest. He offered them as a group of Top 10 lists compiled from surveys of various segments of readership.
One list was “most important location criteria” used by developers. The top three needs are: workforce skills, transportation infrastructure and workforce development.
Another list contained “most active industry sectors.” The top three are: headquarters and back office, advanced manufacturing, and logistics.
Yet another list was focused on the top 10 business climates. Georgia, North Carolina and Texas were the top three, and Illinois was not on the list. Georgia has ranked No. 1 several years in a row, based largely on the success of Atlanta.
Illinois, however, did do better in the list of top 10 states in terms of project activity (third), when it had 444 projects underway in 2018, falling behind only Texas and Ohio.
There was also a ranking of “deal killers,” the factors that work against development. Such things as lack of workforce, lack of community cooperation, and crime are culprits.
So, if politics plays a role in keeping a site from being chosen, how do proponents get past the bickering?
“That’s a great question,” Starner said. “About 40 percent of the responders said politics or complacency or lack of cooperation among jurisdictions is the No. 1 deal killer.”
Developers hear one thing from economic development organizations, but often get opposition when they deal with political jurisdictions whose approvals are required.
“It would be nice if everyone were singing from the same page,” Starner said.
Timely responses and fulfilled promises from economic developers are crucial, Starner said, and that concern is shared across the country.
“The communities that do the best of job of delivering on promises are going to win the most deals,” he said.
The top performing metro area was deemed to be Nashville, Tenn., which Southern Illinois considers a prime competitor for logistics and manufacturing companies.
“There are a lot of reasons why Nashville is very strong right now, he said, noting that Amazon recently chose the city for the location of a logistics center employing 5,000 people. “They have been overhauling their entire approach to economic development for a long time. They have a very proactive and progressive commission of economic development. What they did better than most was they decided to adopt a customer-centric approach to economic development. When a company expresses interest, they’ll say, ‘You tell us what you need to do to make this deal happen, within reason, and we’ll do whatever we can to make this work’.”
Surprisingly, relatively small incentives were offered to Amazon to get the Nashville center, he said.
“It was a couple of hundred million dollar package, but that paled in comparison to the billions in incentives that New York and Virginia offered (for H2Q, the second Amazon headquarters site).”
Tennessee takes a balanced approach that focuses on performance-based incentives, he said.
“And Nashville has proven itself a hotbed of talent,” he said. “You’ve got Vanderbilt University there, you’ve got Lipscomb University. The University of Tennessee at Knoxville is not too far away. That (talent), more than anything, is what attracts companies like Amazon.”
Starner was asked how outsiders view Illinois. He didn’t hold back.
“Honestly, it’s not good. And I think some leaders of Illinois would be the first to admit that. A year ago, I attended an economic development conference in Chicago, and the chief executive officer of Intersect Illinois spoke, and the very first words out of his mouth were, ‘We’re broke. We have no money. We cannot afford to incentivize deals.’ That reputation has somewhat dogged the state in the time since.”
Chicago is still going strong in terms of projects, but that doesn’t help the perception on the outside, he said.
Southwestern Illinois is more closely linked to St. Louis than it is Chicago and escapes the notice of many site selectors who focus more closely on St. Louis and not the east side of the river, Starner said. That makes continuous marketing of Southwestern Illinois much more significant.
“A lot of it really is just getting the word out,” he said.
The data provided by Starner reflects the migration patterns of the American population over the last decade. The numbers show there’s clearly been a retreat from the Northeast and the Midwest and an advance on the Sunbelt and the West.
It is incumbent upon leadership groups in Illinois to prove the outsiders wrong, he said. Leadership Council Southwestern Illinois, whose membership includes CEOs, government and other leaders in pushing for development of the Madison/St. Clair County area “is exactly the way to go,” he said. 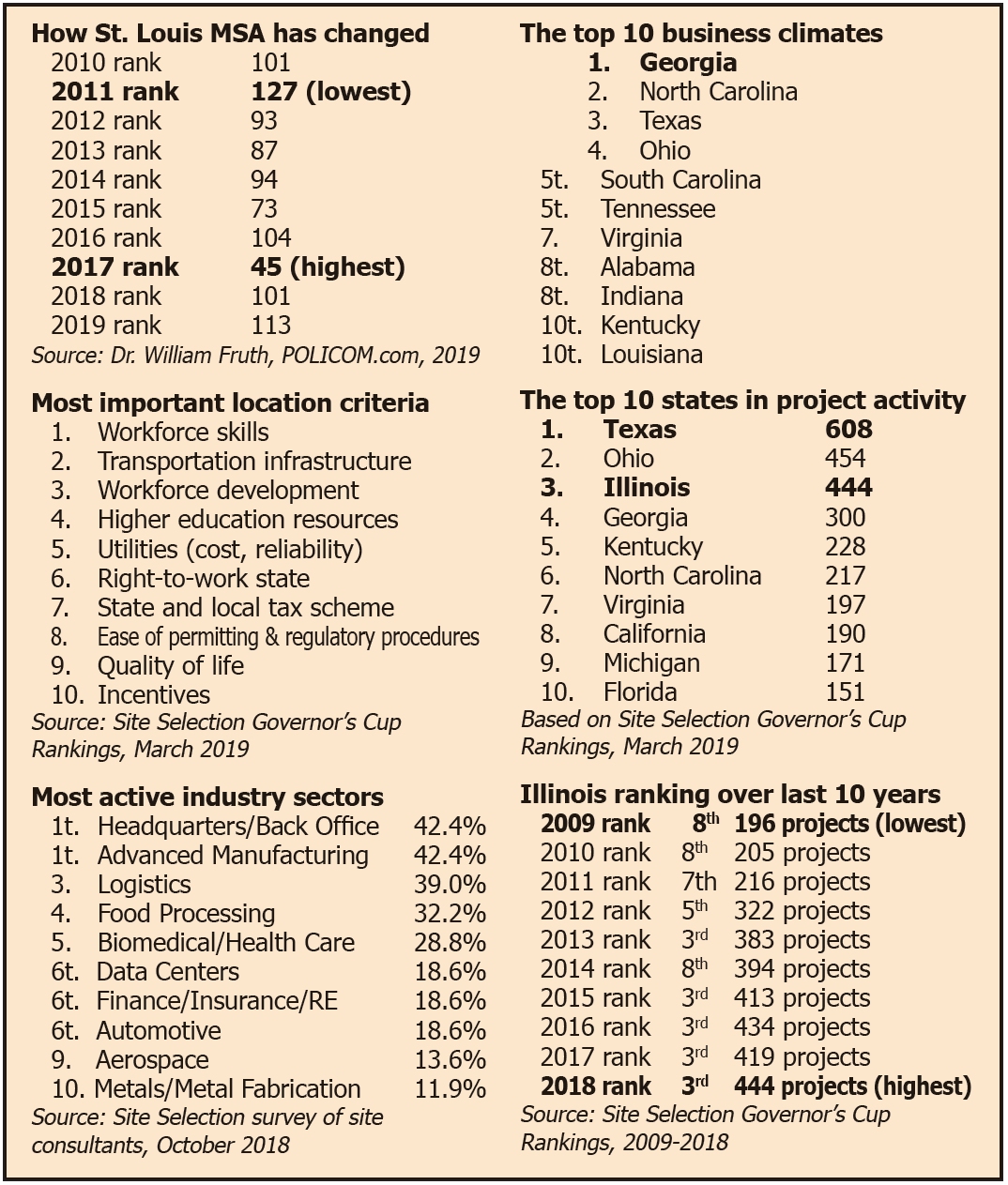