Dr. James M. Dennis, who has made an indelible mark as president of McKendree University for 25 years, has announced he will retire on June 30, 2020, at the end of his current contract.

The Board of Trustees will conduct a national search for his successor, according to Daniel Lett, chairman, who praised Dennis’ leadership over the past 25 years. 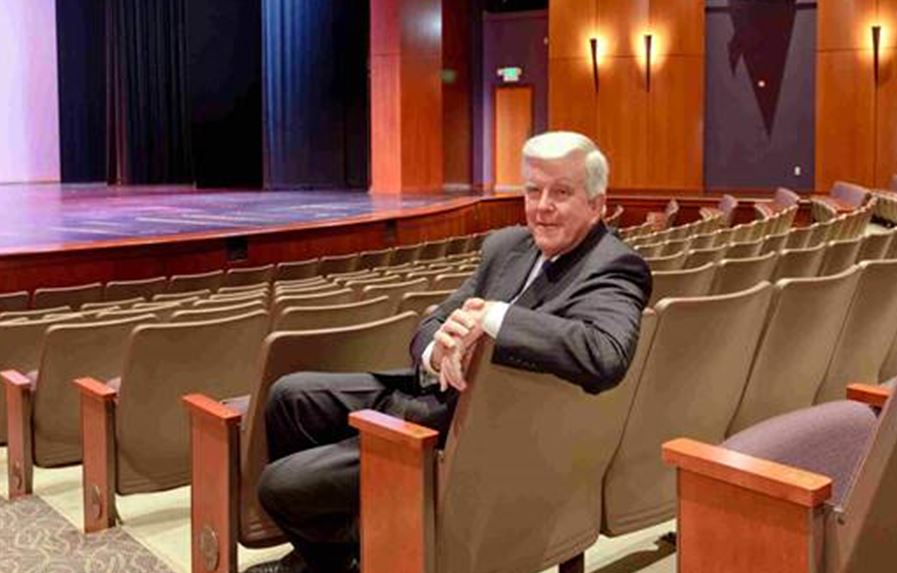 “The accomplishments achieved as a result of Jim Dennis’ leadership have been nothing short of miraculous,” said Lett. “Upon his arrival in 1994, he sought to breathe new life and vitality into this institution—and he has done so by every measure. The McKendree University community has been transformed by a more diverse faculty and student body; state-of-the-art facilities; a rich curriculum and presence in the arts; a focus on service; and graduating young men and women who are successful in every field and walk of life.”

Dr. James L. Fisher—president emeritus of Towson University and of the Council for the Advancement and Support of Education (CASE), and the co-author of several books on college presidential leadership—has described the McKendree president as one of the transformational stories of higher education.

Dennis has been a catalyst for unprecedented growth and progress over a quarter-century. A native southern Californian with lifelong ties to higher education, he arrived in Lebanon, Ill., after a 27-year career at the University of Southern California, with a bold, enthusiastic vision for McKendree’s future. In his inaugural speech as its 32nd president, he identified seven priorities:

– Strengthen the reality and perception of McKendree as a major liberal arts college.
– Recruit more of the region’s most academically talented students, with emphasis on underrepresented students.
– Improve the quality of student life.
– Expand the emphasis on international education and prepare students to function in the global community.
– Expand McKendree’s public service role in Southern Illinois and metropolitan St. Louis.
– Keep pace with new technology.
– Increase resource development.

Under his guidance, McKendree has increased the academic strength of its faculty, students, and programs; enrollment, on-campus residence, construction and renovation, athletics and co-curricular activities, and acquisition of property. During his tenure, the number of faculty and staff has nearly tripled, and enrollment and fundraising have increased dramatically. McKendree’s growing reputation has garnered national attention from prestigious publications and organizations including U.S. News & World Report and The Chronicle of Higher Education.

Three successful site visits by Higher Learning Commission evaluation teams have resulted in reaffirmed accreditation in each decade of his tenure. “McKendree is a gem of a college and a very special place!” the HLC committee chair remarked after the most recent review in September 2018.

Dedicated to building a more diverse campus community, Dennis has promoted initiatives such as the Social Justice and Equity Committee to encourage greater understanding and sensitivity. Extracurricular activities such as the Marching Bearcat Band and the Show Choir have contributed to a more vibrant campus community. During his presidency, McKendree’s cyber defense and nationally ranked speech and debate teams have achieved notable success. In 1996, football returned for the first time since the 1930’s and in 2002, the Bearcats rose to the National Association of Intercollegiate Athletics (NAIA) championship semifinals. In 2013, the athletic program completed its transition from the NAIA to NCAA Division II, competing in the Great Lakes Valley Conference.

Two significant fundraising campaigns during the president’s tenure enabled dramatic enhancement and improvement of the campus landscape and community. The Piper Academic Center, built circa 2001, houses classrooms, faculty offices, and the Admission and Information Technology offices. The Hettenhausen Center for the Arts has become southern Illinois’ premier performing arts venue and a showcase for student talent since its 2006 opening. Construction has also included athletic facilities, two new residence halls in 2011, and the renovation of the dining hall and historic campus buildings, including Bothwell Chapel.

Dennis’ influence has extended beyond the campus as a member of numerous professional and civic organizations. He is the 2019 president of Leadership Council Southwestern Illinois, a not-for-profit economic development corporation, and served on the boards of the Higher Education Consortium of Metropolitan St. Louis, Memorial Hospital and the St. Louis Regional Chamber. He was on the executive board of the Council of Independent Colleges, the Associated Colleges of Illinois and the Federation of Independent Illinois Colleges and Universities, and is the past president of Illinois Campus Compact, an organization dedicated to volunteerism.

Reflecting on the president’s impact, Board Chairman Lett referred to a pledge President Dennis made in his 1994 inaugural remarks. “He concluded with a promise found in this quote from theologian John Wesley: ‘Do all the good that you can, by all the means that you can, in all the ways that you can, at all the times that you can, to all the people that you can, for as long as you can.’ He has certainly more than lived up to these words in the 25 years he has served McKendree University.”