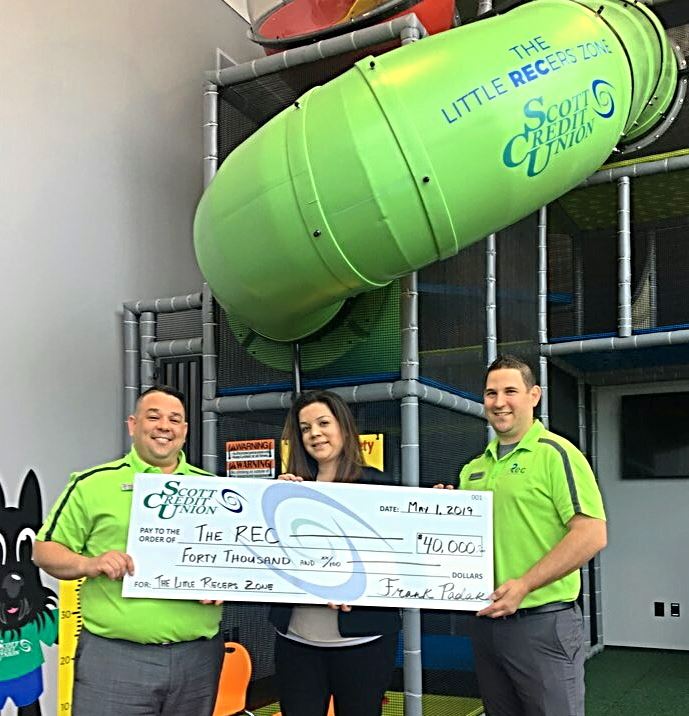 Scott Credit Union has presented a $40,000 check to support The REC, Fairview Height’s new recreation complex for the next 10 years.

Scott Credit Union will sponsor the “Little RECer’s Zone” at the new facility on Bunkum Road.

“This is another opportunity for us to support our community and the people who live here,” SCU Community Relations Representative Cassidy Beck said. “It is our way of showing our support and long-term commitment to our area.”

The “Little RECer’s Zone” features an indoor play structure, Beck added. The area serves as the child care room for the facility.

“Credit unions are committed to helping people and supporting community projects like these allows us to do that,” Beck added. “We are proud to play a small role in this impressive recreation complex.”

Scott Credit Union has made giving back to its communities a major priority. The local credit union contributed more than $370,000 and its employees volunteered more than 2,000 hours to a variety of local civic efforts throughout the region in 2018.

The credit union has contributed about $3 million and its employees have volunteered over 21,000 hours to a variety of local civic efforts and financial education throughout the region in past 10 years.

“We realize that without our members and the communities in which we serve, we would not exist as a financial alternative,” Beck noted. “Supporting our communities is very important to us.”

The credit union has increased its community involvement in the past few years while also increasing its efforts to educate consumers of the value of doing their financial business with a not-for-profit credit union.

“We want people in the area to know more about the value of doing business with a credit union,” she added. “That is why we have focused our time on educating area residents about Scott Credit Union. One of the big ways we’ve done that is through our community involvement.”