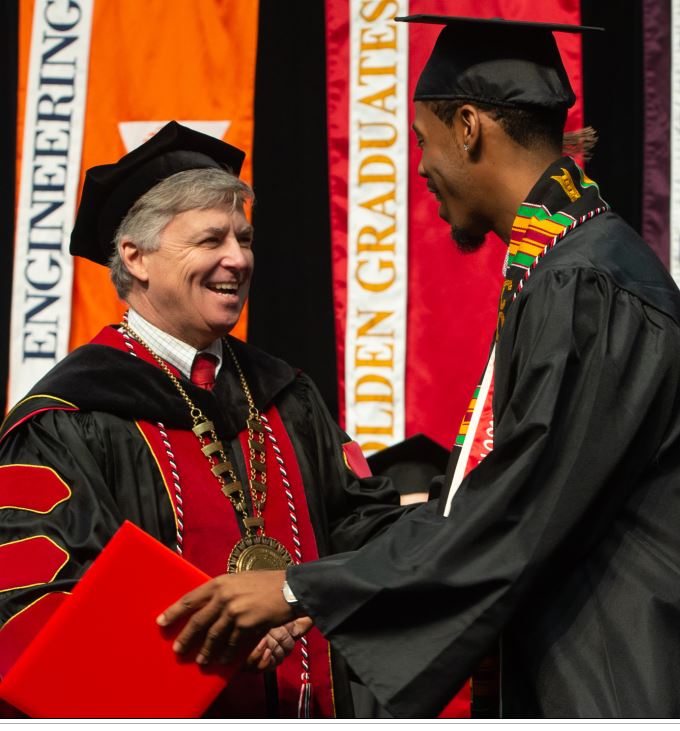 Pembrook congratulated the graduates on their hard work, persistence, and the focus that propelled them to degree completion.

“Your wide array of backgrounds, experiences and perspectives have made SIUE a better institution during your time here,” he said. “We hope you will return often to campus to update us on your successes and to enjoy the ongoing vibrant campus environment that is SIUE.”

Student speaker Laycee Thigpen, a non-traditional student from Belleville, received a bachelor’s in early childhood education. She recognized that people now view her fellow graduates as experts to be relied upon.

“As an expert, we have to remember to see the individual,” she said. “Each child we may work with, each family we may support, each client we come in contact with needs us to see them as an individual – an individual that has weaknesses but is filled with so many strengths. It is important for us, as the experts, to see the wealth of knowledge that each person brings to the table.”

In the first College of Arts and Sciences session at noon, student speaker Amy Yates, another non-traditional student from South Roxana, earned a bachelor’s in sociology with a specialization in diversity and social justice. Yates realized that the world can experience change if everyone does their share to help.

“Fellow graduates, we have been privileged enough to attend a university that encourages and emphasizes compassion and inclusion,” Yates said. “We may come from different backgrounds, have different experiences, and different talents and goals.

“Even though our majors are all different, from philosophy to music to political science and everything in between, there is one thing we all have in common – everyone in this room today has the ability to make a difference. So, let’s show the world what SIUE graduates are made of, and as Gandhi said, ‘be the change you want to see in the world.’”

Bromann acknowledged the impact of the faculty, family and friends gathered for the ceremony. “Perhaps most significantly, we’ve learned how to be a pharmacist simply by being raised and influenced by the very guests in this room,” she said. “Your love and support have shaped us along the way. We will only be as good a pharmacist as we are a compassionate human.

On behalf of former SIUE President Earl Lazerson, his son, Paul Lazerson, received an honorary Doctor of Humane Letters degree at the Saturday evening ceremony for the second session of CAS students and the School of Engineering. Earl Lazerson served as SIUE’s president for nearly 14 years. He joined the SIUE faculty in 1969 and taught mathematics until he assumed the role of interim University president in 1979, and then permanently in 1980.

Litchfield native Kristin Ishmael, a transfer student who earned a bachelor’s in biological sciences–medical sciences specialization, was the final student speaker. She spoke of life’s unexpected twists, turns and changes.

“We type-A people plan everything down to the minute,” she said. “But, instead of crying or grimacing in pain and annoyance when life takes longer or chooses a different route than expected, or when obstacles bar our path, I urge you to embrace it. You can’t predict the things life will teach you about yourself and about others. You never know when something better than you could ever have expected or imagined will come along.

“There were a lot of life lessons, some of them learned the hard way, and even though I wouldn’t say this path has always been easy or fun, that leap of faith three years ago ended up changing my life completely and for the better.”

Earlier Friday morning, student speaker Kelly Pfaff, of Sandwich, who earned a bachelor’s in economics and finance, addressed the School of Business. She pointed to Professor Mary Anne Pettit’s enthusiasm and passion for changing Pfaff’s perspective on a business career. “I didn’t expect to grow to care about this school and community in the way that I have, and be thankful for it providing so many of the things that make my life happier,” she said. “I know now that if you keep moving with clarity and a willingness to change and grow, you’ll make it by alright. You’ll find yourself happy in where your life is headed, excited by what lies beyond.”

Schnebly encouraged her peers to pack their moral compass for their careers. “Your journey into the world of nursing will be rewarding and enriching,” she said. “You will be stepping into the role of trusted ally to your patients. In fact, public opinion polls show that nurses are rated as one of the most trusted professions. People believe nursing to be of the most ethical and honest professions. This is because nurses provide more than just physical care for patients.

“At all levels, nurses provide patient education and help patients make informed decisions. Nurses exhibit strong advocacy in order to maintain quality care and protect patients’ rights. Nurses provide emotional support to patients and their loved ones.”
The Graduate School concluded the first day with Granite City native Lindsay Doolittle, a non-traditional student who earned a master’s in English, serving as the student speaker. The Graduate School ceremony included all graduate students except those in the Schools of Nursing and Pharmacy.

Doolittle described her children as being the inspiration for her educational pursuits. “Achieving something more for myself was something I never thought was possible,” she said. “When my boys were little, I felt that my lack of college education was holding me back from higher paying jobs to support us. At the time I started my undergraduate degree at SIUE, I was a freshly divorced single mother … scared, yet determined to make something of myself.

“After graduating in 2012 and beginning my teaching career, I felt as if something missing. I started reading about master’s programs and all of the courses that went along with the programs. I realized I missed being in school, learning new things, discussing readings with my peers, and challenging myself academically. Seven years later, my four children have once again been a source of inspiration as they are in school themselves and can see the power that a good education brings to an individual.”

All ceremonies are available on siue.edu/tv.