Illinois lawmakers are one step closer to putting Gov. J.B. Pritzker’s signature campaign promise on the 2020 ballot: A proposed change to the Illinois constitution that would allow for higher income tax rates on higher levels of income.

“This is the next step in a more than decades-long effort to modernize our tax code,” said Sen. Don Harmon, D-Oak Park. 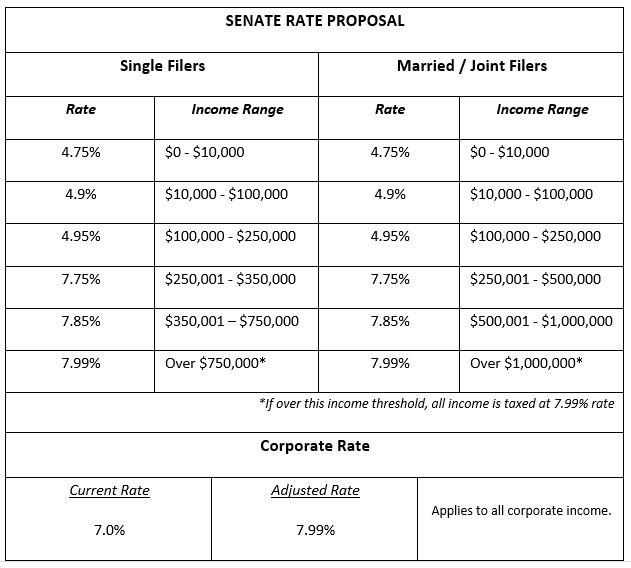 The Senate passed the measure 40-19. Republicans, who are a superminority in the chamber, were unanimous in opposition.

Both chambers need to approve the measure with a three-fifths vote before it is placed on the ballot in the fall of 2020. It would need approval from 60 percent of the voters choosing to vote on that question or half of all voters participating in the election.

“I applaud the Senate taking a major step forward to create a fair income tax system in Illinois, ensuring that 97 percent of taxpayers will pay the same or less and only those making $250,000 will pay more,” Pritzker said in a statement after the vote. “I look forward to continuing our conversations with stakeholders in the House as we take action on the fair tax.”

Pritzker has proposed the change as a way to make the state’s income tax “fair” in that it would tax people with the ability to pay more while opponents call the change a blank check for lawmakers to hike taxes on smaller groups of people without fearing the political backlash that they otherwise would with a flat income tax.

“With a flat tax, you raise rates on everybody,” said Sen. Dan McConchie, R-Hawthorn Woods. “The changing of rates becomes not an issue of first resort but an issue of last resort. As soon as we implement a graduated tax system, we actually make it structurally and politically easier to change those rates and brackets going forward.”

Harmon called that argument a “canard.” He said it’s hard to raise taxes on anyone.

While there are no proposed rates in the constitutional change, lawmakers have tied the change to legislation that was passed shortly after that would set income tax rates at a graduated rate structure that starts at 4.75 percent on income up to $10,000 and tops out at 7.99 percent on all income over $750,000. Joint filers would see similar rates but with a top rate that starts at $1 million.

The rate brackets are lower than what Pritzker had initially proposed, something opponents have used as ammunition.

“Since the governor put out his proposal to the fair tax to what we have today the top marginal rate has already gone up and the income to which the top rate is subject for those filing separately has already come down by $250,000,” said state Sen. Dale Righter, R-Mattoon.

Along with the progressive tax, the Senate approved legislation that would eliminate Illinois’ estate tax. The Illinois Attorney General’s office collected $315 million from that tax in 2018.

The Senate also passed a measure that would, on condition that the state fully funds the school funding formula and other categoricals, local school districts would be subject to a property tax freeze. It would exclude property tax hikes to raise funds for pension payments or debt service.

All of the changes would take effect in 2021.

– The Illinois News Network provided the above story. Below are other statements released throughout the day Wednesday:

“I applaud the Senate taking a major step forward to create a fair income tax system in Illinois, ensuring that 97 percent of taxpayers will pay the same or less and only those making $250,000 will pay more,” he said. “I especially thank President Cullerton and Senators Hutchison, Harmon and Manar for their leadership and commitment to stabilizing our state’s finances and protecting the middle class and those striving to get there. I look forward to continuing our conversations with stakeholders in the House as we take action on the fair tax.”

From state Sen. Christopher Belt D-Cahokia, who voted for the package:

“We are one of the few states (nine) in the country to still have a flat tax. We’re losing residents every year and they’re going to neighboring states that have a fair tax system. If we want to keep our residents in Illinois, we must adopt a fair tax or they are going to move to Minnesota, which is a leader in job creation because they have fair tax. It’s time for the wealthy in Illinois start paying their fair share and taxes be cut for working families’.”