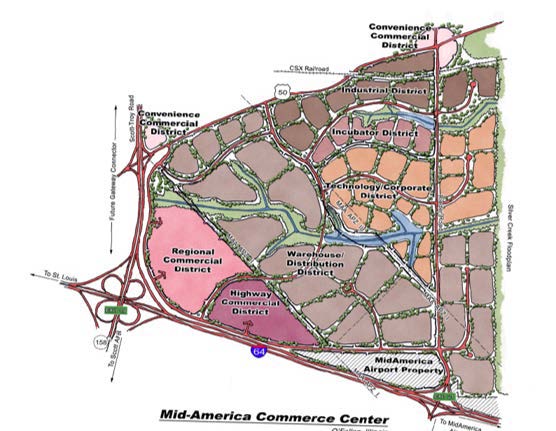 By ALAN J. ORTBALS
Major developments are imminent in O’Fallon’s Mid-America Enterprise Zone, and the city is moving as rapidly as possible to bring them to fruition.
TriStar, a St. Louis real estate development company that created the Gateway Commerce Center in Edwardsville, is working with the city of O’Fallon to attract light industrial/warehouse developments on the northwest corner of I-64 and Reider Road, just north of Scott AFB. If successful, said Grant Litteken, the city’s assistant administrator, the entire area may become the region’s next great development.
“There are multiple companies that have expressed they would want to open within a year or so,” said city administrator Walter Denton. “We did not expect for things to go this quickly, but Tri-Star is getting great interest. We have been told that construction could start as early as June. It’s not definite yet, but we’re moving as if that would happen so that we’ll be prepared.”
While the enterprise zone has been around since 2000, it’s never offered property tax abatement, something many other zones in the state do. Over the last year, Denton and Litteken have been working with St. Clair County, O’Fallon’s School Districts and other taxing bodies to amend the zone to include an abatement structure that would match that of Gateway Commerce Center: 100 percent abatement for the first seven years, 70 percent in year eight, 40 percent in year nine, and a 10 percent abatement in year 10.
Numerous units of local government — municipalities, school districts, the county, etc. — had to voluntarily approve the change. That process was completed on March 21. There are nearly 1,500 acres in O’Fallon’s Mid-America Enterprise zone that will soon have the property tax abatement program available. The city is also investing $3.5 million to install sanitary sewers to service the development area. Denton said the business park would compete with cities throughout the Midwest like Memphis, Nashville, Indianapolis, Chicago and Kansas City.
“It’s a great site,” Denton said. “The workforce is there. The location is there. The access is there. The utilities will soon be there. It’s one of the premier sites in the area. But, in today’s market, just being a good location doesn’t necessarily mean you’ll win the project. You have to be competitive in the marketplace. Without property tax abatement, the lease rates simply would not be competitive. The partnership that was formed between the city of O’Fallon, O’Fallon’s school districts, St. Clair County and TriStar has made the area a powerful investment opportunity.”