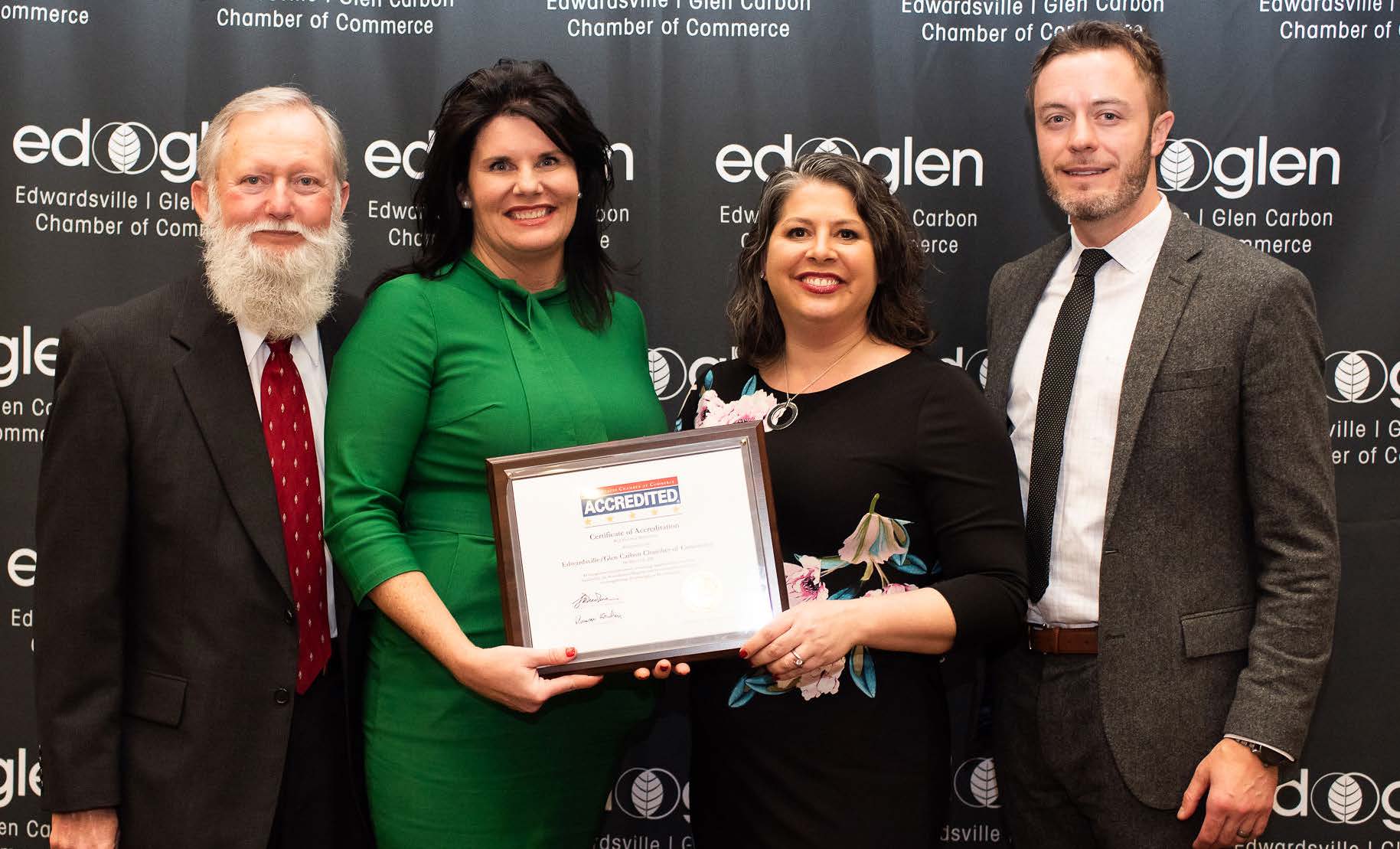 By DENNIS GRUBAUGH
The local chamber of commerce is typically the host of countless ribbon cuttings, networking sessions, breakfast meetings and activities around which the business community likes to gather.
But with some extra effort, chamber representatives can also become a symbol of professionalism and a bastion of excellence.
The Edwardsville/Glen Carbon Chamber of Commerce falls into the category “all of the above” after last month officially receiving 5-Star Accreditation from the U.S. Chamber of Commerce. It’s an honor bestowed upon a relative few chamber organizations and comes after years of local efforts.
“I still feel kind of numb. I knew we had submitted the best package we possible could, but in talking to CEOs around the country it’s almost unheard of to receive five stars on your first try,” said Desiree Bennyhoff, CEO and president of the Ed/Glen Chamber.
The timing on the announcement was fortuitous, coming Tuesday, March 5 — just in time to be shared with a packed house of 300 people who attended the chamber’s annual gala just two evenings later.
“We are in a community that strives for excellence. For us, we knew that we were doing some really great things, but the third-party validation was a really big deal,” she said.
Bennyhoff has lived and breathed the application process for more than five years. However, the process leading up to the research began even before that.
It started in 2013, when Bob McClellan, the retired head of Hortica insurance company in Edwardsville, accepted the role of strategic planning facilitator for the chamber. He interviewed about 50 business heads locally and developed a plan that led the chamber to decide that it needed to be more involved in advocacy, rather than simple networking.
“We needed to be the voice of business,” Bennyhoff said. “The culmination of our strategic plan was submitting for U.S. Chamber of Commerce accreditation.”

That was a heady goal. Only seven other chambers in Illinois — none south of Springfield — had earned that recognition, and only 1.7 percent of 7,000 chambers nationwide had done so. Part of that reason is the cumbersome paperwork, which is a little like “killing trees,” said Bennyhoff, who started her efforts in earnest at the beginning of 2014.
The process begins with a basic litmus test of several questions about what professionally run chambers should be doing.
“You get to the bottom line and it says, ‘If you’ve answered no to any of these questions, you’re not ready to begin the process,” Bennyhoff said. “I started there and created a plan to be able to answer yes to all of those.”
One of the key challenges was going through a regular audit, which the chamber was not doing. That quickly changed and for the last three years, there has been an audit.
Human resources policies and financial procedures also had not been updated in a long time. The Ed/Glen CEO spent a lot of time collecting best practice samples, working with legal counsel to make what she was doing was adequate and appropriate. She turned to the board on approval of policies.
In all, the chamber had to conform in nine areas of assessment for accreditation — governance, finance, human resources, government affairs, program development, technology, communications, facilities and benchmarking.
The outcome of accreditation is based on how well the chamber is evaluated in each of those nine areas. The four levels of accreditation are: accredited, accredited with 3-star distinction, accredited with 4-star distinction, and accredited with 5-star distinction.
By the time she was done, Bennyhoff had printed out a stack of paper, 10 inches high, but reduced to a single USB drive, which she submitted to the U.S. Chamber office by its Dec. 31deadline.
The package was first reviewed by the U.S. Chamber staffers who work with accreditation. From there, it went to a committee of accredited chambers of commerce from across the country – all five-star CEOs. Then, it went to the U.S. Chamber board of directors, which had the final say.
On the Edwardsville end, things took years to develop, partly because the local chamber has only three staff members. Bennyhoff; Katie Haas, the membership director; and Kathy Hentz, administrative assistant, shared in pulling together the necessities.
Bennyhoff is a graduate of the National Institute for Organization Management, a program of the U.S. Chamber of Commerce Foundation. Haas plans to attend her second of four years on the same program this summer. And Hentz goes through occasional training.
Bennyhoff has also taken on an increasing role in state and national chamber events. She will be in D.C. for a Congressional Lobby Day. She serves on a national level for the Institute for Organization Management, on the curriculum committee, has been on the Illinois Chamber of Commerce board of directors since 2015 and is the past chairman of the board for the Illinois Association of Chamber of Commerce Executives.
All those backgrounds were documented as part of the application.
“In the end, it really was a team effort — telling the story of not only what we do, but why we do it and how we do it and how we measure success,” she said.
Despite years of work, Bennyhoff said she benefitted herself from being a bit “nerdy.”
“I found it strangely relaxing to immerse myself in the process,” she said. “There are numbers, and I dig that.”
In the end, the process is a great management tool and leaves her ready for the reapplication, which will come in five years.
“The good news is, I’ve refined our file management system. The next time around it will take about six months,” Bennyhoff said.

SIUE steps up outreach to communities