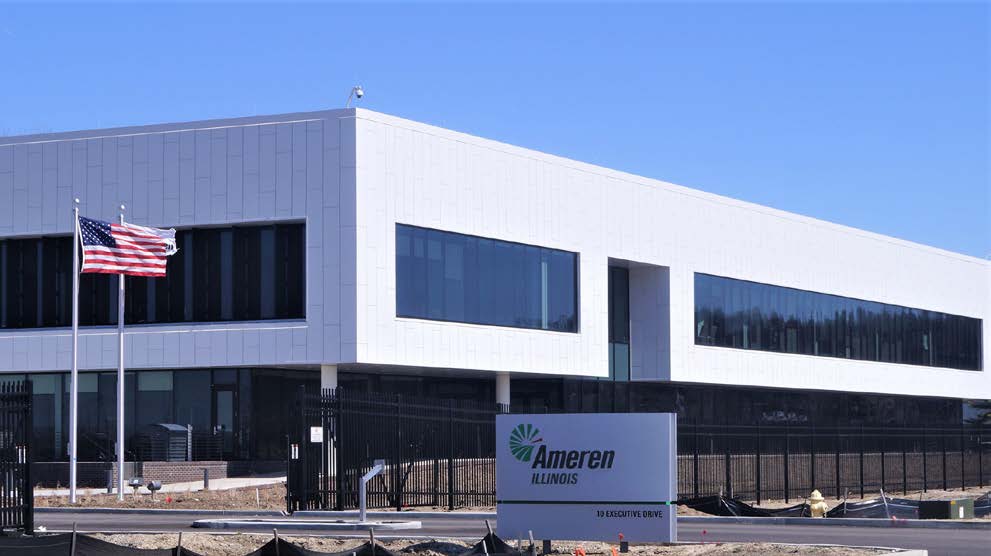 By ALAN J. ORTBALS
The new Ameren Illinois’ corporate headquarters in Eastport Plaza in Collinsville has been completed and 350 people are going to work there every day. Most of those jobs came to Collinsville from Ameren’s St. Louis headquarters. While the 48,000-square-foot office building is in a TIF district, City Manager Mitch Bair pointed out that Ameren received no compensation for the development.
That project pairs well with the new FCB Bank headquarters that is being developed in the former Shop N Save grocery store building on Vandalia Street. Initially, the bank expects to locate 70 jobs in the center but projects that number to grow to nearly 100. `
“This move brings high quality professional jobs to Collinsville and all of those employees will patronize Collinsville businesses as will the Ameren development,” Bair said.
And significant progress is being made in the city’s newest TIF district, the Southwest Corridor TIF No. 4, which stretches along Old Collinsville Road and up St. Louis Street.  The city has completed construction on a new water plant and plans to demolish the old one and make it part of the adjoining sports complex. The water plant was financed through the state’s revolving fund so that TIF and business district revenues could be used to upgrade the sports park and infrastructure in the area.
There is already interest being shown by developers in the district as a property adjacent to the city’s sports complex has been sold with the buyers eying closely the city’s plans.
“Tourism is one of the major cornerstones of our economic development strategy right now,” Bair said. “We’re looking to create demand for hotel rooms in that area to compliment what’s going on in Eastport Plaza with the Gateway Center and our investment there.”
Once again Laura Buick GMC was the largest GMC dealer in the country, according to Bair, and that, along with a host of retail establishments, hotels and restaurants, helps the city keep its property tax low.
“We have the third-lowest municipal property tax rate in Southwestern Illinois after Fairview Heights and Troy,” Bair said. “Everybody else is pretty close to double our rate for municipalities so it really gives us a competitive advantage when we’re seeking to attract a multi-million-dollar development.”