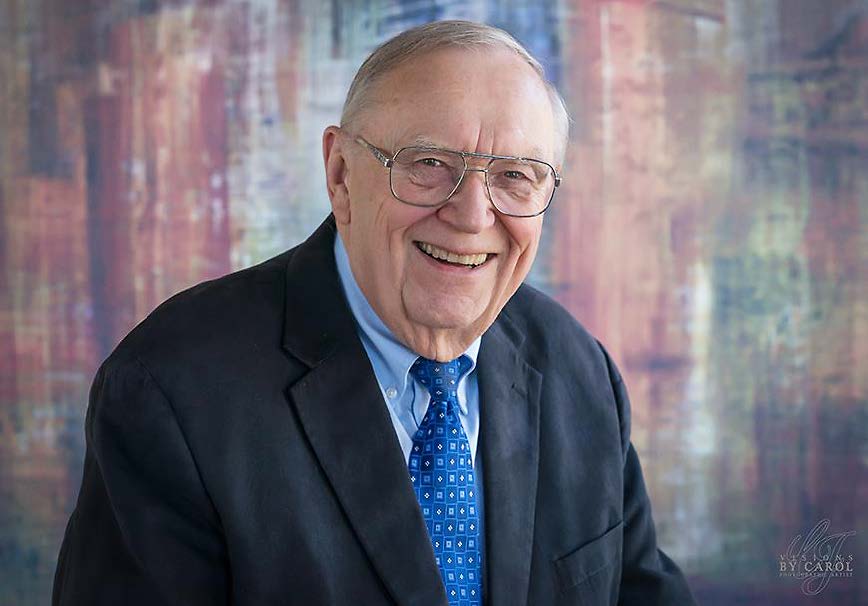 By DENNIS GRUBAUGH
Merrill Ottwein is seemingly a man of a million stories and one of his favorites is the day a monkey chased a fellow veterinarian around an exam room at Hawthorne Animal Hospital in Glen Carbon.
The monkey, it turned out, didn’t take kindly to being jabbed with a hypodermic needle. The animal grabbed the offending instrument and took off after the offender, Dr. Art Lippoldt. Ottwein was in the next room and went to investigate the calamity.
“I heard the distinct sounds of metal pans on a hard floor. And people yelling. Art went to inject a shot of penicillin into the monkey’s rear and the monkey just exploded. It took 10 or 15 minutes to calm everything down. Art had picked up a pan lid and was using it as a shield.”
Ottwein chuckles at the memory, one of many collected from his years as a veterinarian — as well as various turns as a humanitarian, state senator, real estate developer and musician. Today, he still dabbles in real estate, still plays the trombone and still tells the tales.
Ottwein turns 90 in late April, and the family is planning an open house celebration in May. He and his wife of 68 years, Grace, have four children, Ann, Emily, Amy and Paul, and numerous grandchildren.
Ottwein graduated in 1956 with a degree in veterinary medicine from the University of Illinois. He set up his first practice from his home along Illinois Route 159 in Glen Carbon. He had been raised on a farm in Troy and many of his first “clients” were farm animals.
“Those were some of the last days when veterinarians could establish a practice from scratch,” Ottwein said. “It’s gotten so complicated and expensive they can’t do it anymore.”
Three years into his profession, he established the first Hawthorne Animal Hospital, located further north on Route 159, in a new building across the highway from what is now the Cassens dealership.
“There wasn’t much out here,” he recalled. “We had the old elevator, the Country House (restaurant) the feed mill and Heck’s service station on Glen Carbon Road. That was about it.”
Ottwein took on Dr. Joe Helms as a partner in the early 1960s and eventually sold the business to him. Other owners have since purchased the clinic and built a much bigger location on Cougar Drive in Glen Carbon.

Ottwein’s veterinary expertise was called to service in 1966-67 in what turned out to be one of the most interesting chapters of his family’s life when he loaded up everyone and spent a year in Honduras.
A call went out from the United Church of Christ to manage a rabies program in the Central American country. The family was expecting a six-month stint.
“I had plateaued out in terms of practice satisfaction and I was looking for something a little different,” Ottwein said. “It really rang with me. I thought what an opportunity.”
The experience lasted from Christmas week 1966 to Christmas week 1967.
To make the trip, the family took their children out of Glen Carbon School and enrolled them in an international school in San Pedro Sula, Honduras. Today, the city is defined as one of the most dangerous in the world, Ottwein said, but even then, the climate was not a stable one. No one fully realized it until they arrived.
“Police were soldiers with rifles,” he said. “We were assigned to a mission compound that was full of bullet holes. There were two political parties down there, one was called the Reds and the other was called the Blues.” Nobody would wear either of those colors for fear of being shot. One of the Ottwein children suggested they all wear yellow.
The original plan to fight rabies morphed once Ottwein got into the work, and he found himself serving multiple denominations and getting into agriculture work, including rice hauling and digging water wells.
“The United Church of Christ funded it, but half the time I was doing it for that church, about a fourth of the time I was doing it for the Mennonites of America, and about a fourth of the time for the Moravian Church. The rabies program almost became incidental.”
The entire episode was eye-opening for both the parents and their children, but they wouldn’t trade it, he said. Nor would their father do it again, simply out of safety.
Upon returning to the states, the doctor found himself thinking of a new career. He began expanding on his real estate interests. He had already bought a local farm from the Bardelmeier family, related to his mother. Then he bought the old Wessel farm and then the Otto Kriege Farm. All of the properties were next to each other and became the core of what eventually would become the Cottonwood commercial and residential developments in Glen Carbon. Ottwein returned to the University of Illinois to study agriculture appraising.
He wasn’t yet done with being a veterinarian, but by that point, he was widely recognized around the community, and friends thought he would also make a good candidate for public office.
In 1969, state Sen. Paul Simon, the bow-tied Democrat who eventually would run for president, was vacating his state seat to rise to the post of Illinois lieutenant governor. Simon, of Troy, had been a good friend of the Ottweins.
Ottwein, a Republican, won the race for the partial term and served only two years, from 1970 to 1972, before losing for a second term to another well-known area figure, Sam Vadalabene, a Democrat from Edwardsville, who went on to serve 23 years in the Senate.
“I did get some things accomplished, and it was a great experience, but it took me away from practice, and by that time the farms were ripening quite a bit,” Ottwein said. As a result, he stepped away from his veterinary practice to do more with property development, joining forces with a brother-in-law.
Cottonwood was the big focus, a mega development in which both residential and commercial were blended to take in hundreds of farm acres.
“I didn’t intend to build houses, and I didn’t build many in my name because we’d always built lots for other people to build on,” Ottwein said. “But I thought it was a good spot for commercial.”
And while the Cottonwood development (now home to Walmart and much more) eventually did take off, Ottwein’s contributions to it ran into crushing financial problems in the 1970s and 1980s when financing rates were running amok.
“My timing couldn’t have been worse,” he said. “Up until that time, with the exception of the loss at election, I couldn’t do anything wrong. But, at that point, I couldn’t do anything right.”
Inflation was heading up, and the federal reserve, in an effort to combat that, restricted the supply of money.
“So, the laws of supply and demand became more imperative. When money became unavailable the price of it went sky high. The prime rate at that time hit 21.5 percent,” he said.
Ottwein had the original Cottonwood mall under construction when the crisis began. Developers started off with a $4 million loan.
“And before it was over, I had added everything else I could put in the pot. The bank was happy to do it because they kept me solvent a little longer on their books, but in the end we nearly lost everything we had at that point in time.”
Despite the setback, he never gave up on real estate. His way back, he said, was to switch to real estate brokerage. Years ago, he and his son Paul formed a company that exclusively represents buyers, Home Buyers Relocation Services.
“We don’t have the conflict of interest with the seller and we don’t try to represent both sides of a transaction. The services have a particular prominence in the relocation world.”
Cottonwood was a tough experience, but Ottwein did enjoy many successes, including Ginger Creek, Sugar Creek, Lakewood, and a part of the Kettle River subdivisions – each of them prominent developments in Edwardsville or Glen Carbon.
He and his wife have lived in the Cottonwood area since 1983.
“I tell friends, I’m not regretful of the experience. It’s part of a life time of experiences. And I’m the father of a great family. That’s my No. 1. All else pales,” he said.