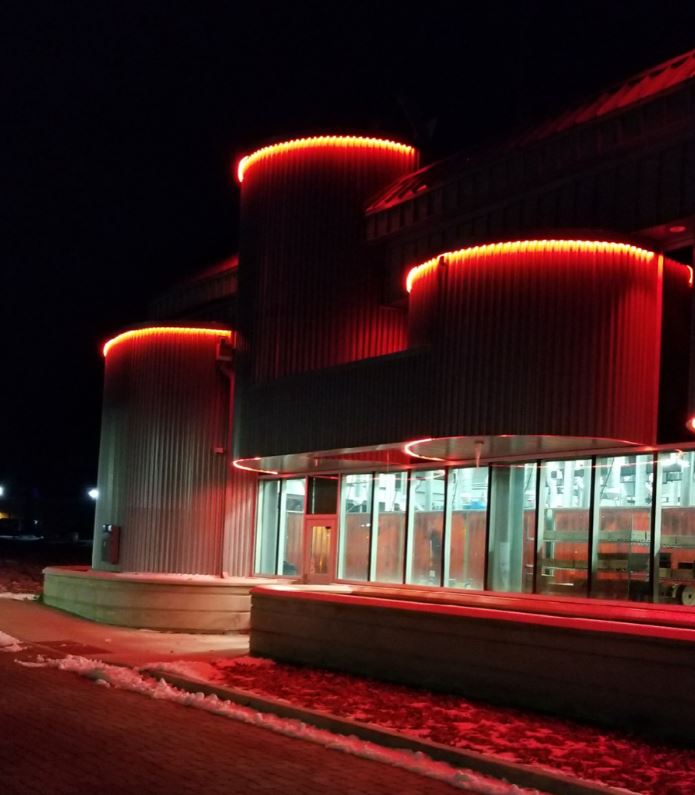 According to a release from the Godfrey Fire Protection District, Captain Jake Ringering died as a result of injuries sustained when a portion of a brick home in the 4600 block of Culp Lane collapsed during suppression efforts. Firefighter Luke Warner, who was also injured in the incident, was transported to a St. Louis hospital by helicopter and was listed in stable condition Tuesday evening. Two other injured firefighters were treated and released Tuesday.

The college is flying its flags at half-staff today, and the lights outside the Weber Workforce Center on the Godfrey Campus have gone red in their honor.

“The fact that both Jake and Luke were such well-regarded firefighters in their departments and also instructed at various times for the college’s fire science programs is a clear example of their dedication and service to the overall community,” said Greg Bock, Associate Director of Safety of the Houston Area Safety Council at L&C, who worked with both Ringering and Warner at L&C. “They always went beyond mere duty. They answered to a higher and sacred calling.”

Ringering started with L&C as a fire stoker in Fall 2005 and began teaching Industrial Fire Brigade courses in 2008. He taught at the college as recently as 2015, including courses in Industrial Firefighting and Rope and Confined Space Rescue. According to his LinkedIn profile, he was an engineer in the East Alton Fire Department from February 2001 to August 2010, when he joined the Godfrey Fire Protection District as its captain.

Warner started at L&C as a fire stoker in 2014, and has been teaching courses at the college since 2015. He has been with the Godfrey Fire Protection District since 2003.

“The enthusiasm that Jake and Luke have brought to the Fire Science program as instructors is contagious,” said Bernie Sebold, L&C Fire Science Coordinator and Chief of the Alton Fire Department. “When our students take one of their classes, they are eager to learn more so that they can exhibit the same passion for our trade. These firefighters are true professionals that are admired throughout our region.”

The BackStoppers, Inc. is currently collecting donations to help support Ringering’s family. Donations can be made online at https://backstoppers.org/assisting-the-family-of-captain-jacob-ringering/ or by mail at The BackStoppers, Inc., P.O. Box 795168, St. Louis, Missouri, 63179-0700.

PHOTO: LCCC lit up the Weber Workforce Center in red Wednesday in honor of the two Godfrey firefighters involved in a fatal house fire Tuesday in Bethalto.