Frank Abagnale says his early life as a con artist began at age 16, when he was asked to pick which parent he wanted to live with when they divorced. He refused to pick and ran away, leaving the courthouse and the parents he loved.

The renowned cybersecurity and fraud prevention expert, bestselling author, and the subject of the Steven Spielberg movie “Catch Me If You Can” spoke Thursday in Godfrey. 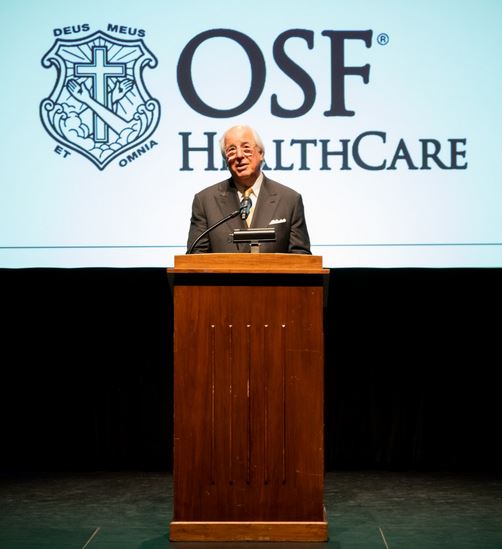 Before his talk, Abagnale presented a class in cyber-security to select OSF HealthCare Mission Partners along with business leaders from the Riverbend. Abagnale emphasized, “Every single security breach occurs because somebody in that company did something they weren’t supposed to do or somebody in that company failed to do something they were supposed to do and that opens the door for hackers.”

According to Abagnale, hackers warehouse stolen data and usually don’t start using it for several years so credit monitoring has to be ongoing. He checks his rating with the three major agencies almost daily. Abagnale believes credit freezing is the best approach after a breach and he’s pushing for federal legislation for prevent fees for that service.

He also never uses a debit card because it exposes money in a person’s banking account. “I use only credit cards because if somebody gets my card number and charges $1 million, my liability by federal law is zero,” Abagnale explained.

The author of five books, including his latest, “Stealing Your Life,” also pointed out debit cards don’t do anything to improve a person’s credit score.
“OSF HealthCare is extremely vigilant about security. It is embedded in the culture and I have great confidence because of the regular information we receive about technology and security updates, according to OSF Saint Anthony’s Health Center President Ajay Pathak. “However, hearing from one of the top experts in the world about best practices and where the future is headed is a once-in-a-lifetime opportunity that I’m excited we could offer local business leaders and to our Mission Partners.”

During his speech to the community, Abagnale explained how he transformed from a notorious con man to an international cybersecurity expert, trusted by the FBI where he has worked for more than four decades.

About the famous movie, Abagnale said he had nothing to do with it. “I would have preferred not to have a movie made about my life.” He said Spielberg liked the redemption side of his story and ultimately, “My family and I were pleased with the outcome of the film but we thought in a couple of years it would all be forgotten and move on with my life.”

Abagnale shared that he never imagined the film would go on to make $1 billion for Dreamworks and become a Broadway musical that inspires weekly emails from people ranging in age from eight to 80.

He told the crowd of almost 400 Cancer Center supporters he still feels deep shame about what he did to survive.

“It’s a burden I will live with until my death.”