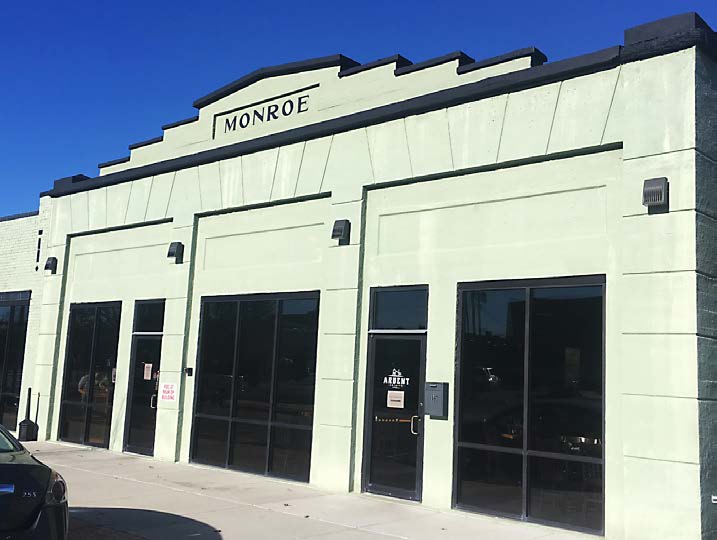 By DENNIS GRUBAUGH
It took a big team to engineer one of Uptown Collinsville’s most significant business projects of the last few years.
The result is the Old Herald Brewery and Distillery, a challenging opportunity to turn a landmark newspaper building into an upscale entertainment venue.
Korte & Luitjohan Contractors, of Highland, was the lead contractor, and the company assembled a team of players, including Volkert Inc., of Collinsville, which did the civil engineering. A variety of other contractors also served as subs. Guarantee Electrical, of Granite City, performed the electrical work; Hock Inc. of Millstadt, the mechanical and the HVAC; Bergmann Roscow, of Belleville, the plumbing; Lakeside Roofing, of Collinsville, roof asbestos abatement; and L&K Fire Protection, of Marion, the fire suppression work.
Together they recreated 115 E. Clay St. — the building historically remembered as home to the Collinsville Herald.
The team worked together over a two-year period on a project that civil engineer Stephanie Muentnich calls a “fascinating engineering feat.” She is assistant vice president of Volkert and the company’s Illinois real estate operations manager.
“We’ve done design-build projects before, but this one started out as someone’s dream. That makes it a little closer to your heart. Derik and Whitney (Reiser) are very inspiring people,” she said of the owners.
Scott Muentnich, director for design and construction for Korte & Luitjohan, said the project involved every major aspect of design-build.
“Every one of the processes that go into one of our big projects went into this building,” he said. “This was like a new build, but the shell was here.” And it was quite a “shell.” Concrete floors were 8 inches thick in some places. The floor for the new distillery area once held up a printing press.
Renovating a building dating to 1924 is in some ways harder than building one from the ground up, Scott Muentnich said.
Volkert’s Project Manager Joe Hemphill became involved early in the process when boundary and topographic surveys, document preparation and site design services were needed to acquire additional adjacent property. The extra land helps prepare for a planned patio on the east side of the building, as well as space for parking options and utility needs.
Multiple land deeds were needed, some going back to the early 1900s.
“This is an old property and you have to determine where your property lines are, and that’s not always easy,” Stephanie Muentnich said.
Hemphill handled the site work, getting the needed documents through city approval.
“Permits were among the first things to acquire, and the city was very good to us,” Hemphill said.
“This is a really important project for the city,” Stephanie Muentnich added. “Everybody had the attitude going in that this is something we want to be successful.”
Renovation outside included replacing a dated, asbestos roof. A water line extension was needed to account for the tremendous water needs of a brewery as well as fire suppression. The back parking lot was redesigned in the process.
Inside, much attention was paid to safety and separation of the brewing and distilling processes. The distillery is on the first floor, set apart but visible through glass to the patrons in the restaurant and bar. The brewing processes are all on the basement level.
The work had to account for any potential hazards, including the production of flammable ethanol, owner Derik Reiser said. The distilling area features an explosion-proof circuitry panel, with low-voltage controls, meaning less opportunity for sparks. Any extra ethanol vapors are vented out through the roof. The space is federally bonded since spirits production is a U.S.-regulated business.
The team spent much time figuring out the right classification of the spaces and which codes applied to those spaces, which separates production from the public.
There was no plumbing at all left in the building by the time that Reiser got possession, so the project required all new water lines and sprinklers. The fire suppression plan includes an unusual preventative in the basement — a concrete curb designed to corral any spilled liquid and the sprinkler water needed to dilute it to keep the mix from becoming a flashpoint.
A new, 8-inch water line, designed by Volkert’s Hemphill, was needed to supply the building. A new fire hydrant has been added. Members of the group talked about the fire in 1950 that damaged the roof and much of the building’s newspaper contents. Black charring can still be seen in some of the timbers.
Installation of a sewer was another big challenge, with an elaborate, cost-effective system designed by Bergmann Roscow to handle both the large amount of water used by the business and to dovetail with the layout of the city’s old sewer system, Scott Muentnich said.
Sewage is carried out of the building into a holding tank where an ejector pump will shoot the effluent through lines that go back through the building and out the front to the city’s main sewer lines.
“That was unique, trying to figure out how to make it work for his purposes,” Muentnich said.
Another mechanical issue was addition of a 1.8-million Btu boiler located in the basement and needed to heat the water to make products.
And, an all-new HVAC system was installed on the roof for heating and cooling.
Scott Muentnich said everyone connected with the project took great pride in seeing it through. He notes the décor reflects much of the building’s past.
“This is not just another restaurant,” Muentnich said. “He tied in the newspaper and the people who were here — there are so many who are still in the community.”