G. Christine Taylor witnessed a cross burning in her neighborhood, was among the first to integrate an all-white elementary school at the age of five, and was welcomed and empowered by her white first-grade teacher to learn and succeed. These experiences and more fueled her in becoming a champion of diversity, equity and inclusion, and positioned her to continue the work in today’s troubling climate, she said. 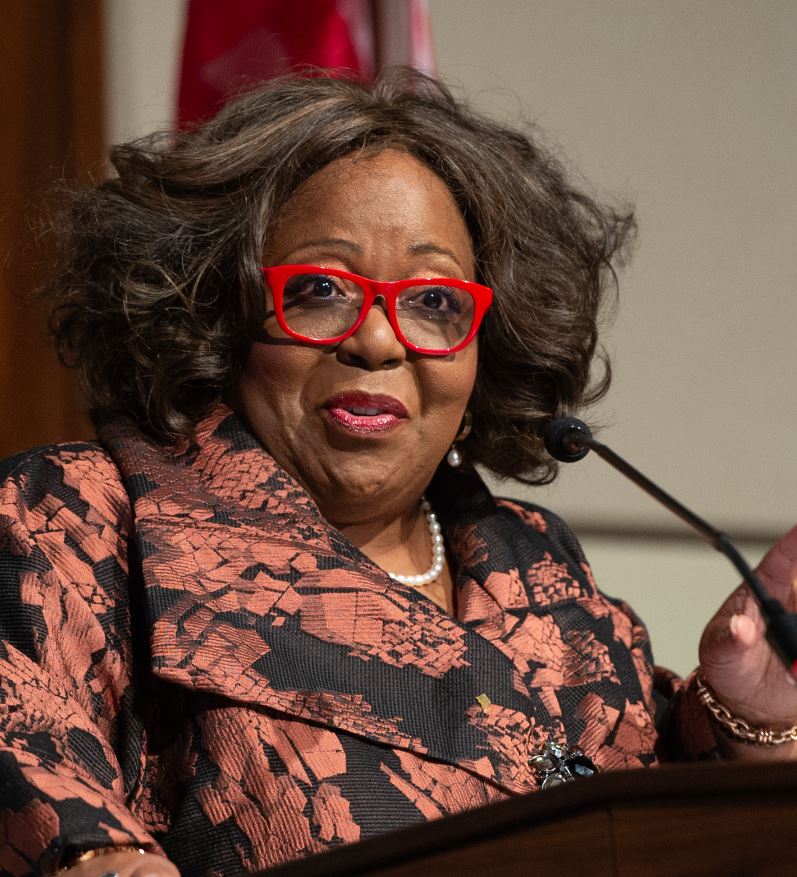 “As I look around and see the bias incidents in our nation and on our campuses, such as African Americans being stopped for living while black,” said Taylor, “I have come to a better understanding of one of Dr. King’s sayings regarding justice and fairness.”

Taylor was the guest at the 36th MLK Week Luncheon, presented by the Center for Student Diversity and Inclusion, which drew approximately 265 people.

“Even though King’s speech was 50 years ago, please note the relevancy for 2019,” said Taylor. “‘We are now faced with the fact, my friends, that tomorrow is today. We are confronted with the fierce urgency of now. There is such a thing as being too late. Procrastination is the thief of time. Let us rededicate ourselves to the long, bitter, but beautiful struggle for a new world.

“I’m convinced,” she added, “that we are living in the words of Dr. King – the Fierce Urgency of Now: the Sequel.”

SIUE Chancellor Randy Pembrook welcomed the audience and offered several of King’s quotes. “One of my favorites is, ‘Life’s most persistent and urgent question is what are you doing for others?’ SIUE has responded to that concept of doing for others, because we share Dr. King’s dream.”

Pembrook noted several ways the university has and is doing well in the area of diversity and inclusion:

• The expansion of the Dr. Martin Luther King Celebration
• University’s new strategic goals and objectives
• The opening of the CSDI
• Regularly scheduled inclusive conversations opened to students, faculty and staff
• The SIUE Black Faculty and Staff Association being recognized as a constituency group
• The reinvigorated Diversity Leadership group’s development of the 2019 Diversity and Inclusion Spring Summit
• SIUE receiving the Higher Education Excellence in Diversity Award for the fifth consecutive year

Another highlight of the luncheon was the award presentations. The following were honored for their outstanding achievements and contributions:

MLK award winners reflected on their winnings and the legacy of the civil rights leader and giant.

“Dr. King once said that ‘Everyone can be great, because everyone can serve,’” said Myron. “I have tried to serve by helping others achieve their educational goals and by supporting diversity in STEM (science, technology, engineering and mathematics) education.”

“Upon Dr. Sadegh Khazaeli’s retirement, I assumed responsibility for maintaining the Louis Stokes Alliance for Minority Participation (LSAMP) at SIUE,” continued Myron. “This program supports and encourages underrepresented groups to pursue and complete undergraduate degrees in science and engineering.”

Smith says his MLK scholarship will help him continue his education, which in turn will assist him in furthering his leadership skills and community service.

“Dr. Martin Luther King embodies the kind of person I hope to become: a persuasive leader, a man of confidence, a devoted religious member and an excellent speaker of the truth,” said Normington, who plans to major in English or business communications in college.

“I most admire Dr. Martin Luther King Jr.’s ability to peacefully fight for his beliefs, even when faced with hatred,” said Ramay, who aspires to major in biology or genetics in college.

“King’s vision of racial equality was not beyond the outer limits of human capability,” said Renfer, who plans to major in computer science. “Rather, it was a goal for people to achieve through honest discussion and listening.”

PHOTO: G. Christine Taylor, PhD, vice president and associate provost for diversity, equity and inclusion at the University of Alabama, was the keynote speaker at SIUE’s Annual MLK Week Luncheon.