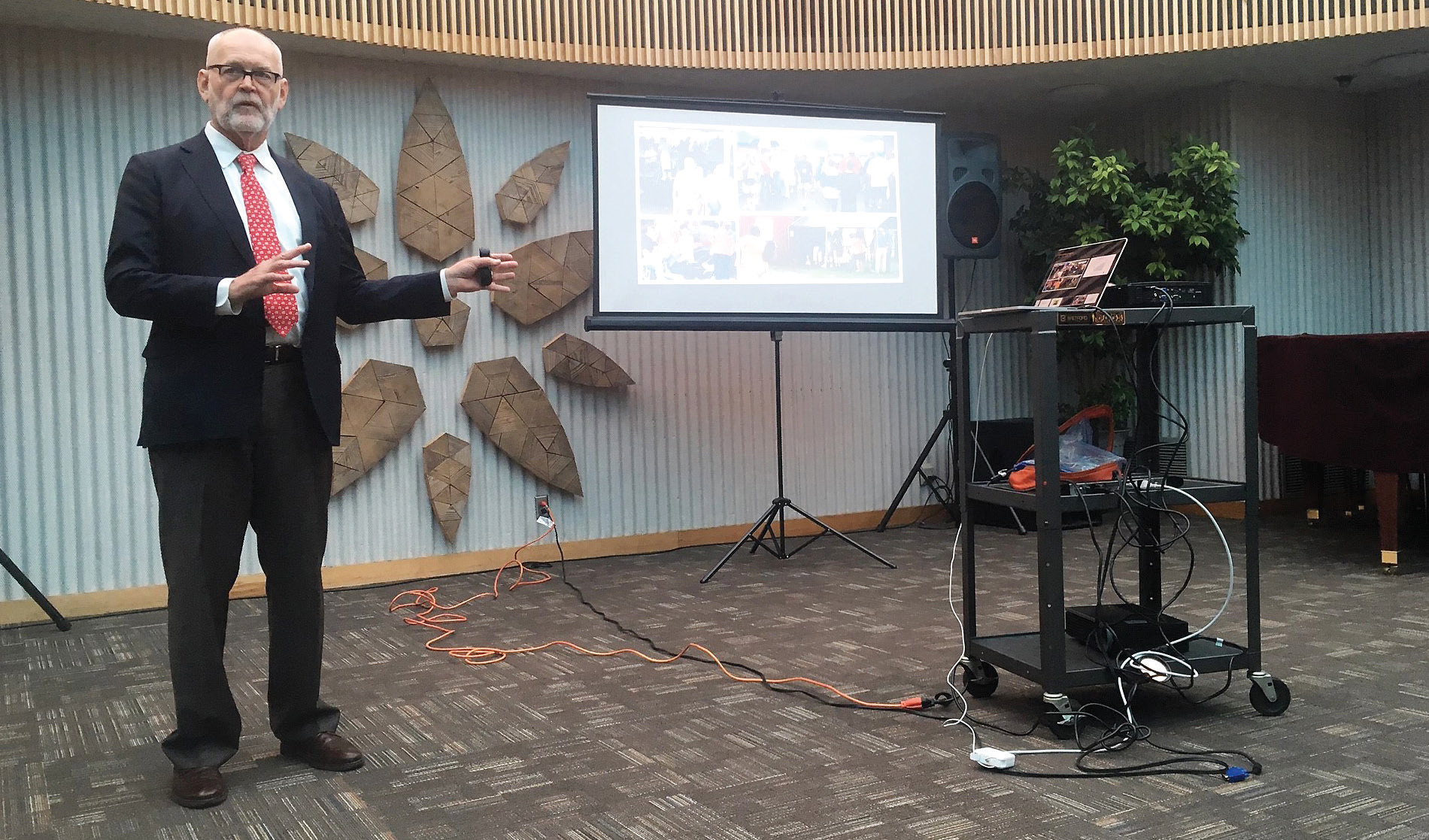 By DENNIS GRUBAUGH
The epiphany for Wendell Potter came in 2007 when he saw the reality of health care in America, the difference between the haves and the have-nots.
After spending almost 20 years in health-care public relations and being paid to tout the industry line, he had become disheartened over the state of managed care. Insurance executives were promising the moon to patients but were far more concerned with investors and the effects of potential reforms. Insurance was becoming unaffordable. Millions were going without coverage.
He was aware of the growing crisis but saw it personally when, while visiting his home in Tennessee, he read about an event offering free health care at county fairgrounds in nearby Virginia. He decided to go see for himself the state of the industry.
“What I saw was something I never expected to see in this country,” he said. “People were lined up by the hundreds waiting to get care, some under tents, but a lot of those lines were leading up to barns and animal stalls. It looked like a refugee camp.”
Potter added: “I didn’t know anything like that existed, but I found out there were events like that all over the country.”
Very quickly, Potter went from insurance advocate to insurance reformer. Today, he is the one of the country’s foremost proponents of the Medicare for All movement, the idea of having a single payer — the government — pay for all people’s health care.
Potter spoke recently at Southern Illinois University Edwardsville where he appeared at the invitation of the Missouri Chapter of Physicians for a National Health Program and others.
Potter rose to prominence in 2009 when he testified in Congress during the first Obamacare debate, about the damage caused by the misinformation campaigns he says he helped create while vice president of communications for Cigna.
“I realized I had played some kind of a role in perpetuating the myth of the health-care system,” he said. “I knew as soon as my testimony was over that I would be known by my insurance industry colleagues as Public Enemy No. 1.”
It was quite a change for a man who was raised to believe in the free market.
“One of my first jobs in the industry came during the early Clinton years, when Bill and Hillary Clinton were trying to enact health-care reform. My industry didn’t like it so we teamed up with the drug companies, the big hospital companies and the medical device companies to develop a campaign to make sure it never happened. And, it never happened (until Obamacare).”
He referred to the early effort as a “FUD campaign” — sewing fear, uncertainty and doubt to make sure people were made afraid of any kind of health-care reform.
He said he worked for a system that had an offense and a defense. The offense encouraged people to believe that the U.S. had the best health-care system in the world. The defense was to respond to criticism from patients and doctors when particular cases got too loud.
“More often than not the company would reverse gears and approve whatever was being denied, just to make the story go away,” he said.
Those stories led to the backlash against managed care and led Potter to question what he was doing for a living.
He handled financial communications for Cigna corporate and got to understand how the company made money. Regularly, he fielded calls from the Wall Street Journal and others.
“Press releases and talking points were handed off to lawmakers, who we had contributed to and were friendly to us,” he said.

The manipulation wasn’t unique to Cigna, where he worked 15 years, or to Humana, another insurance company where he worked more than four years, he said. Every large insurance company was lobbying for footing.
As a former journalist for Scripps-Howard papers in Tennessee and elsewhere before his health career, he brings a certain credibility to the table in discussing the situation. He has now written three books on the industry’s shortfalls. He is also founder of the independent investigative journalism group, Tarbell.org.
Now, he talks about what has happened to Obamacare and where reforms need to go next, which he believes is a single-payer system that is likely to take years to approve.
“(Obamacare) has done some good,” Potter said. “More people are insured who were not before but the problem is the number of unemployed Americans is beginning to creep back up again and a lot of people are now underinsured. Their plans have such high deductibles they can’t afford to pay them and the cost keeps going up.”
The parts that people like about Obamacare — younger people being protected on their parents’ policies until they are 26 and coverage for people with pre-existing conditions — have thwarted attempts in Congress to overturn the law. However, a federal judge in Texas last month ruled that Obamacare is unconstitutional because of the mandate that people buy insurance. That makes it more likely that the validity of the Affordable Care Act will again go before the U.S. Supreme Court, which originally approved the law in 2010.
The Democrat surge resulting from the midterm elections will also mean more support for keeping a national health-care law in place. A Medicare for All caucus, comprised of 70 Democrats, was in place when the new Congress was seated early this month.
Insurance companies have doled out millions of dollars to members of both parties to protect their interests, and Potter believes that further reforms are not a question of if but when.
“A lot of the people who opposed Obamacare early on were not opposed to the reforms per se but the fact that they didn’t think it went far enough,” he said. “In my view, when it passed, it was the end of the beginning of reform. It moved us in the right direction, but it kept a lot of the infrastructure of a broken system in place.”
He’s not sure further reforms will come during the Trump administration but does think talks will continue.
“Where we need to be is a system that disciplines costs, brings us all into coverage, and includes outcomes,” he said.
Health-care premiums have risen from about $6,000 a year for families in 1999 to almost $20,000 today. Meanwhile, employers have been shifting more and more of the cost of the premiums from themselves to their workers.
Many people who do have insurance can barely afford the deductibles, which prevents them from getting care.
“Our employer-based system is unraveling,” he said. “Now, business owners are beginning to get on board and realize they can’t keep providing health care.”
Potter is president of the Business Initiative for Health Policy, a public education and advocacy effort focused on advancing the business and economic rationale for adopting a Medicare for All system in the United States, which is the only developed nation in the world without guaranteed universal health care.
The U.S. health-care system was dead last of developed countries before Obamacare was enacted, but is still that way today because of the law’s weaknesses, he said.

Carpenters help roll back law on Right to Work