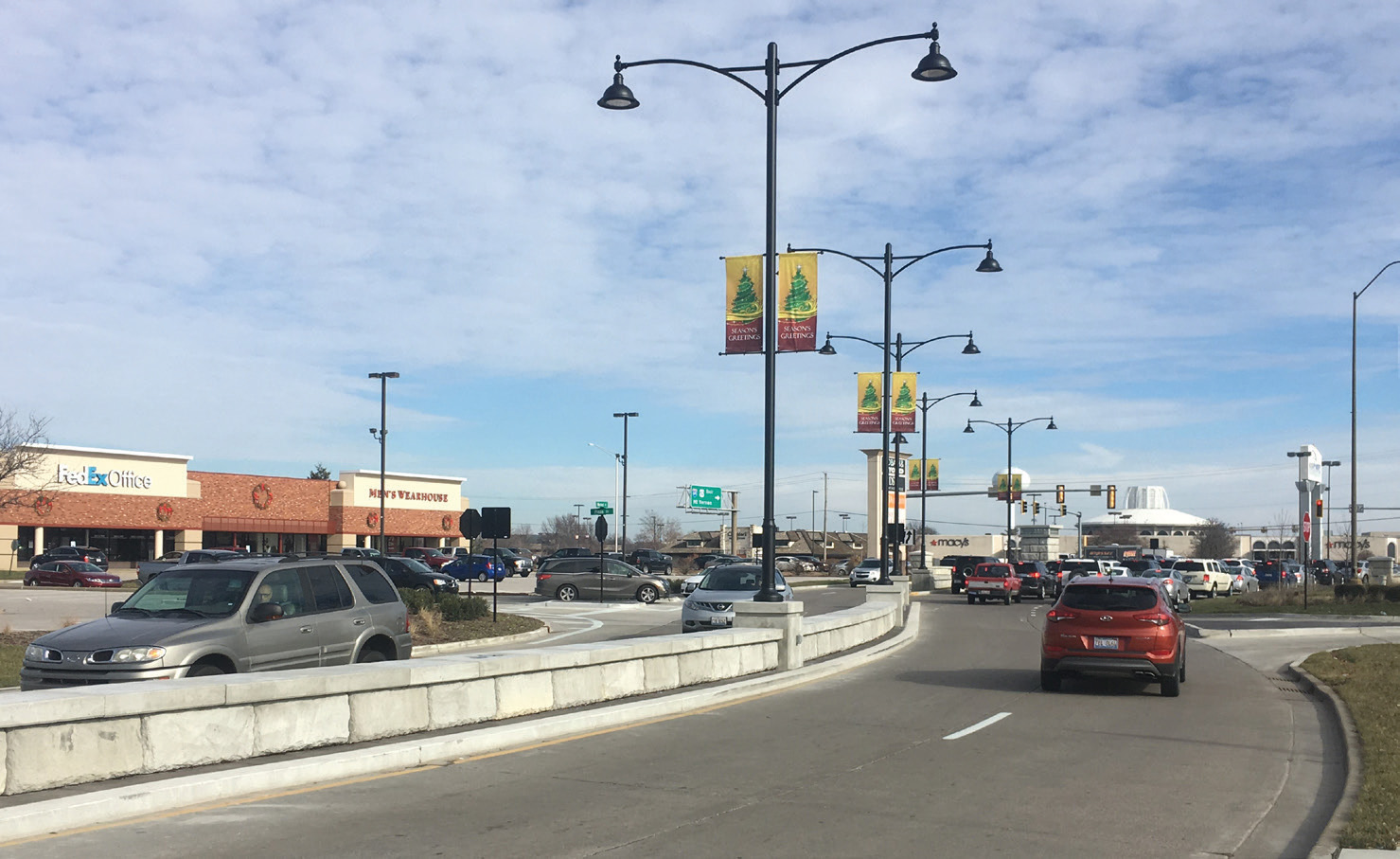 By DENNIS GRUBAUGH
For years, drivers turning into the shopping centers across Illinois Route 159 from St. Clair Square in Fairview Heights played bumper cars as they tried to meander across several lanes of traffic to get to their destination.
Now, the city has reduced the operator error factor from the motorists’ options. Several hundred feet of new, decorative median barrier prevent drivers from shifting lanes quite so easily. The result is being enjoyed by police and businesses alike, who were tired of the number of crashes.
“We’ve rebuilt the western portion of the intersection of Market Place (road) and Illinois Route 159, which is the busiest surface intersection in Illinois south of Interstate 80,” said Paul Ellis, the city’s director of economic development.
The median barrier is a natural extension of a $5 million, multiple-phase streetscape program involving Market Place and Commerce Lane, the two perpendicular common roads serving shopping centers on the east side of Illinois 159, across from the mall. The various destinations include places like Taco Bell and Petco on one side of Market Place and businesses like DSW Designer Shoe Warehouse and Bed Bath & Beyond on the opposite side of Market Place.
The city added curb, gutter and sidewalks as well as median treatments, street trees, plantings, additional lighting, signage and entry wall treatments.
Construction on Phase I made improvements along Market Place from Illinois Route 159 west to the rear of parcels for Petco and DSW.
The second phase will construct a roundabout at the intersection of Market Place and Commerce Lane and is set to begin in 2019. Subsequent phases of this project will complete improvements between the roundabout and the end of Phase I, as well as north and south along Commerce Lane.
The previous problem basically came down to this: Drivers coming off Interstate 64, heading south on Illinois Route 159, would turn right (or west) on Market Place. Almost immediately some of them wanted to turn left, across four lanes of traffic.
“The way the road was configured there was a possibility to make a left turn but it was pretty dangerous. There were multiple crashes — 47 crashes in that corridor in a five-year period,” Ellis said. “That’s incredibly high for that short of a stretch where people can’t go very fast.”
The new barriers take away the possibility of left turns. In addition, at the end of the stretch is now a controlled intersection – a four-way stop — that was not there before. The four-way is located on Market Place between the DSW and Petco stores.
Many of the turning drivers were heading to the Taco Bell restaurant, which has told the city it is glad to see the safety improvements, Ellis said.
“Now, drivers will have to go about another 600 to 700 feet before they can turn, but they can see where they want to go the whole time,” he said.
The city’s Public Works Department addressed the issue with design help from Noel Fehr, of Planning Design Studio in St. Louis. The state Department of Transportation and the public also had input.
The city began the project in the spring and wrapped it up in November.
Ellis was recently in a Missouri suburb where a similar issue exists at another large shopping development.

“They have an almost identical section of road to what we have. I’ve been out there a couple of times before and there are always three cop cars in the intersection. I finally figured out they have cop cars there every day to prevent people from making a left turn and causing an accident,” Ellis said.
Fairview Heights was proactive on the issue, he said.
“Instead of letting it become more of a traffic nightmare, we sought and received state and federal grants that have enabled us to reduce the congestion, the pollution, eliminated a whole lot of the accident potential plus the area benefited from a really nice aesthetic improvement.”
State Rep Katie Stuart, D-Edwardsville, commented on the issue when the city cut a ribbon marketing the new streetscape.
“With the increase in the amount of people shopping during the busy holiday season, it is important that we ensure they have a safe and functional way to get where they need to go,” said Stuart. “When we are able to combine local, state, and federal resources to get road projects done, it improves the lives of residents in the community by giving them an easier path to get to work or take advantage of the many restaurants and retail stores the area offers.”
In 2013, the city of Fairview Heights adopted a Complete Streets policy to ensure that the needs of bicyclists, pedestrians, and transit riders are considered along with those of motorists in planning transportation corridors. This project is an example of the Complete Streets approach.
Complete streets is a transportation policy and design approach that requires streets to be planned, designed, operated, and maintained to enable safe, convenient and comfortable travel and access for users of all ages and abilities regardless of whether they travel on foot, on a bicycle, via transit or in a private car.

Health industry insider now tows line for Medicare for All

Carpenters help roll back law on Right to Work