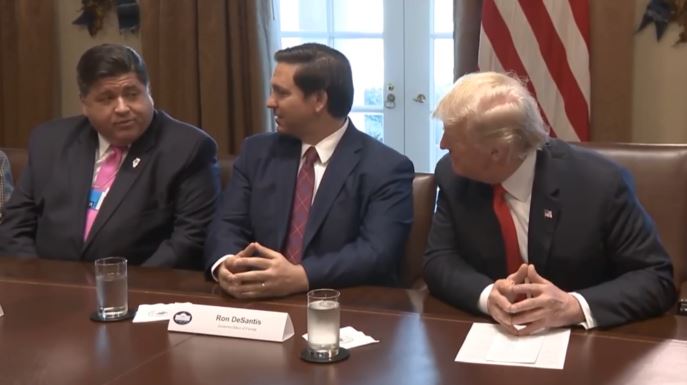 Gov.-elect J.B. Pritzker did something Thursday that Gov. Bruce Rauner avoided: Had a face-to-face meeting with President Donald Trump on live TV.

Along with other newly-elected governors, Pritzker spoke with Trump and other White House officials. Pritzker sat next to Florida’s governor-elect, Ron DeSantis, who was next to Trump.

“Mr. President, I’m J.B. Pritzker, the governor-elect of Illinois,” Pritzker said. “I founded 1871, which was named this year as the world’s best business incubator, and as I’ve been talking with your daughter [Ivanka Trump] I’ve also been a national advocate for early childhood education.”

The White House said that the governors-elect and others met in the Cabinet Room to talk about workforce development, infrastructure, veterans and military families and the opioid crisis, among other issues.

“[Pritzker] went to today’s meeting to advocate for more federal dollars for Illinois, specifically he pushed for a federal infrastructure bill which would help create jobs and repair Illinois’ roads and bridges,” spokesperson Jordan Abudayyeh said in a statement. “At the same time [Pritzker] will continue to stand up to the president, as he has since Donald Trump began running for President, on the many issues where they disagree, like immigration, voting rights, and women’s rights.”

Outgoing Gov. Bruce Rauner rarely talked about Trump publicly, but has said he had a good relationship with the White House under Trump and under former

President Barack Obama, who was president for the first two years of Rauner’s term.

Rauner had been criticized by both Republicans and Democrats for not publicly engaging with Trump over the past two years. Rauner regularly criticized Trump, but did praise the president for the booming national economy and focus on border security.

Pritzker, who used $170 million from his personal fortune to fund his own campaign, attacked Rauner’s ties to Trump during the campaign.

Both Pritzker and Trump have an estimated net worth more than $3 billion.

“Today, it was my honor to welcome our Nation’s newly elected Governors to the @WhiteHouse!,” Trump wrote on Twitter.

Story by Greg Bishop of the Illinois News Network. Image from White House You Tube video.