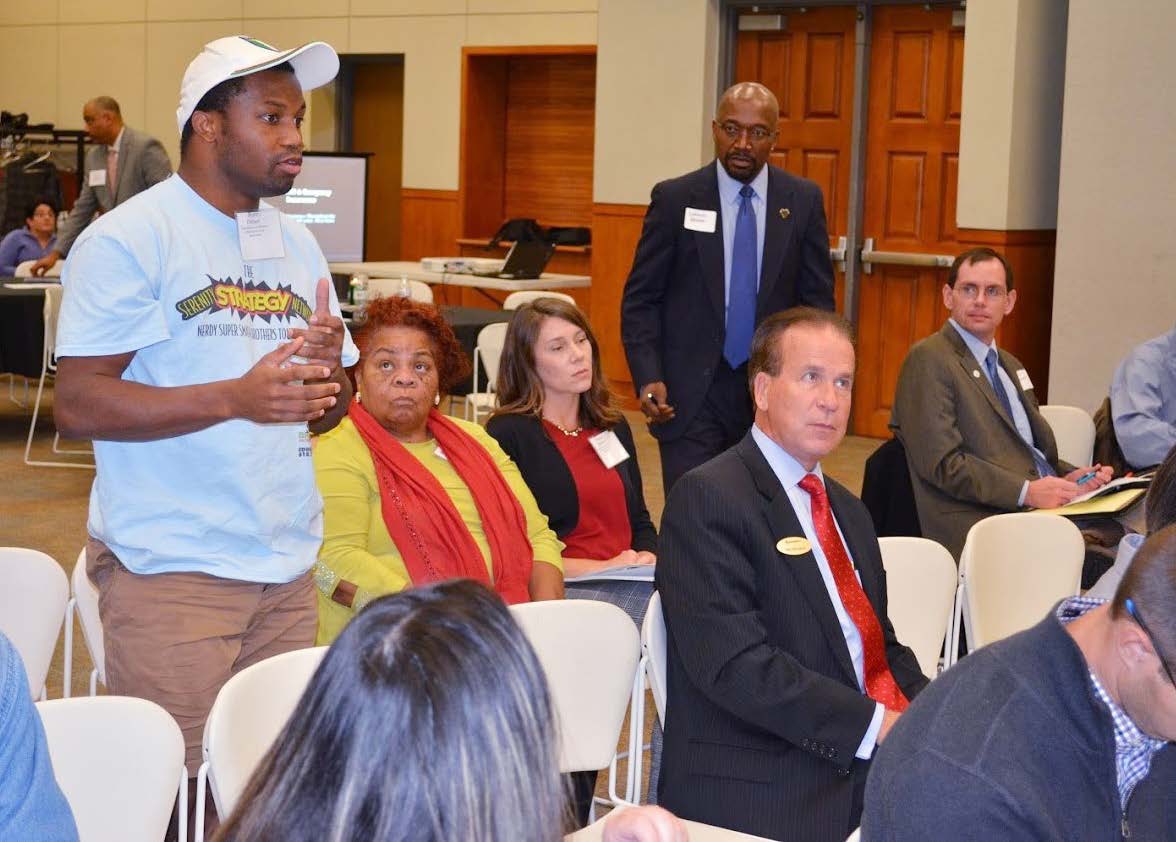 By DENNIS GRUBAUGH
East St. Louis area officials are on a mission to build alliances between small businesses and potential government resources.
Entrepreneurs and others got a rare opportunity to find out what’s potentially available to them during a fall event sponsored by the Illinois Small Business Development Center for the Metro East and the Greater East St. Louis Business Development Association. The event was held on SIUE’s East St. Louis Higher Education Campus.
Of particular interest is the work being done by the National Development Council, a 50-year-old nonprofit and Community Development Funding Institution licensed under the U.S. Small Business Administration.
The organization, known simply as NDC, has leveraged $500,000 provided by the city into a $2 million loan fund called Grow East St. Louis. The program will provide low-cost financing for small businesses and has committed three staff members to work in the city.
The program promises low interest rates, 100 percent financing, quick turnaround and longer terms and lower payments on qualifying projects. Money is being made available for businesses wanting to buy equipment to increase production; refinance expensive debt; purchase a building; or cleanup to attract clients.
The object is to draw investment in a town that traditionally has ranked among the most impoverished in the country.
“This administration is really intent on investing in those who have invested in us,” Mayor Emeka Jackson-Hicks said. “Starting with the small businesses that exist.”
Many businesses have been stymied in their attempts to get conventional financing to keep business going or to expand, she said.

Recently, the city was awarded five Opportunity Zones as part of a new community development program established by Congress in the Tax Cuts and Jobs Act of 2017. The program is designed to encourage long-term investments in low-income urban and rural communities nationwide.
The zones are designed to lure investment by providing a safe haven for deferred capital gains, which reduces tax liability. That is of particular interest to high-wealth investors.
While the program represents a potential resource, the rules around it are not yet complete.
Ken Baker, a field director with NDC, said every governor had the chance to designate Opportunity Zones within the framework of low-income census tracts.
Most of East St. Louis is in one of the zones, including the areas of the riverfront, downtown, Lansdowne area, and the area from 37th and State Street to 75th and State.
NDC intends to work with the city to identify potential investors as the Opportunity Zone rules are being finalized.
The effort has been awaiting guidance from both the U.S. Treasury Department and the Internal Revenue Service. A first round of regulations was released in early October and now a 90-day comment period is underway. After that a second and final round of regulations is anticipated.
In the first round of rules, the government clarified some early questions. One point clears up wording requiring money to be spent on “substantial improvements.” Another clarified that only 70 percent of an existing business needs to be within a qualified Opportunity Zone in order to qualify for funding. That would be handy for a business with multiple sites. Another rule clarified that an exemption for tax-free appreciation would run through 2047.
The program calls for a seven-to-10-year time frame for the money to be invested.
“And that timeframe doesn’t start when you start your project, it basically starts now,” said Joseph Gray, a director with NDC. “We’ll be looking at those folks who are ready to go now.”
The mayor said the city has enacted several measures in an attempt to draw small business, including tax increment financing, but the partnership with the NDC holds much promise.
“We’re going back to basics. When I came in, the audits were behind several years. We are updating them and have completed five. That’s important because it allows us to apply for more funding for grants,” she said.
Gray, a native of the community, said he met recently with a St. Louis banker who told him there is “new energy in East St. Louis that they want to invest in.”
For more information on the Grow East St. Louis Fund, contact NDC project coordinator Michael Elliott, at [email protected] or (216) 303-7182.
For more information on the Illinois SBDC for the Metro East at SIUE, call (618) 650-2929.