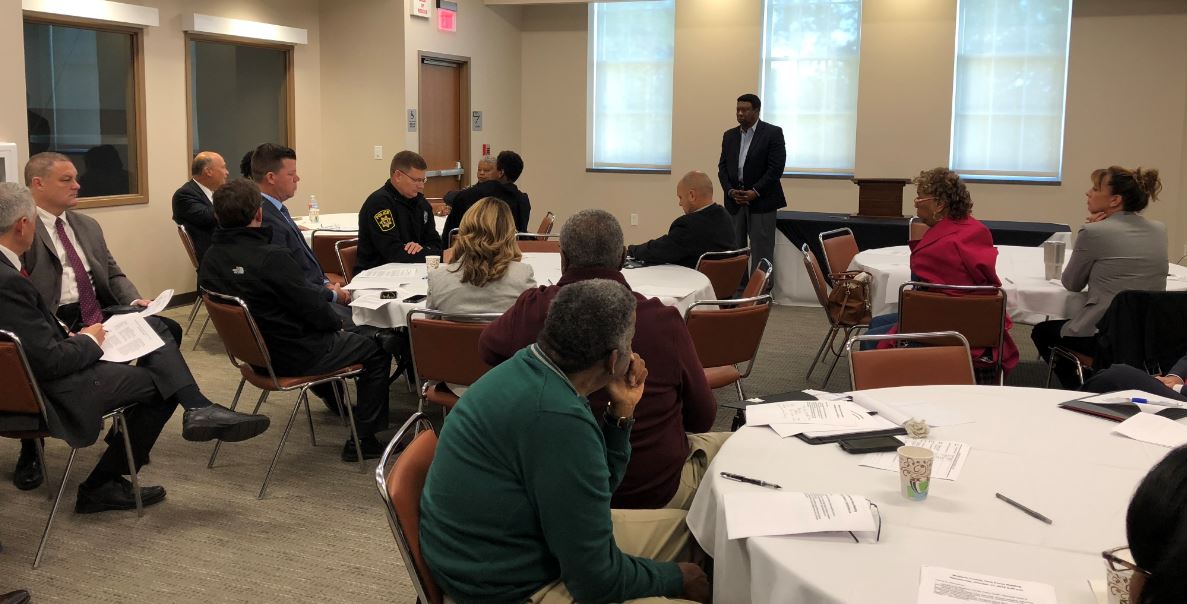 An initiative designed to build trust between law enforcement and various sectors of the community has also helped lead to more diversity on area police departments, supporters said.

The primary goal of the initiative, “Making Madison County a Better Place for Citizens,” is to advance diversity in law enforcement by recruiting, hiring, retaining and promoting officers that reflect the communities they serve.

The initiative began in 2016 and aims to increase equity, justice and inclusion of all citizens and to make Madison County attractive to diverse new citizens and businesses.

“The goal is to assist Madison County law enforcement in the identification of potential minorities and women candidates,” said Ed Hightower, president of the LCMC. As a result of the efforts of the committee, 13 African-Americans, women and other minorities have been added to the law enforcement workforce in communities, including South Roxana, Roxana, Alton, Pontoon Beach, Edwardsville and Southern Illinois University Edwardsville.

“We believe that law enforcement remains an urgent matter, as it fulfills a fundamental role in our society, and in many communities. The success occurring among law enforcement, judiciary, legislators, and civil rights groups is incredible. We meet on a regular basis and share strategies and positive communication, all geared toward building trust,” said Hightower.

Roxana Police Chief Will Cunningham said that this past September, the department hired its first African-American officer, Ian Parnell.

“I do not see color with anyone,” Parnell said. “I remember the challenges I had growing up, the decisions I made as a youth in this community, and the struggles I had as a young man. I do not want that for the up-and-coming generation. I see this younger generation, I listen to them, I hear them and I see they need the help that I needed. I want to give them that help. I feel as an African-American officer, I can bridge the differences with the younger generation and hopefully steer them in the right direction. Roxana is my community, my home, and my family. I am invested and I am ready to forge a new path.”

“I do not see color or ethnicity with anyone. I am glad to have Officer Parnell as our department’s first African-American officer, based on his qualities, attributes, and enthusiasm for the job. Officer Parnell is invested with the community and will benefit the village for years to come.”

“Anytime legislators, judiciary, law enforcement and committed stakeholders can partner to improve diversity and quality life opportunities for citizens, it is wonderful. To see the number of minorities and women added to law enforcement in such a short period of time is simply outstanding. I remain committed to be an advocate for resources and legislative changes to continue the wonderful work occurring in Madison County.”

John Cunningham, president of the Edwardsville chapter of the NAACP:

“Minority representation is critical to law enforcement and to the community it serves, as it promotes greater trust, confidence and faith among its citizens and law officers.”

“Diversity in law enforcement alone cannot solve all challenges in law enforcement or fix public trust with policing; however, I do believe enhancing diversity can improve relations between law enforcement and certain demographics. We have the utmost respect for the men and women who wear the badge and serve our communities, performing their jobs with dignity, honor and integrity, and I believe this is a positive step toward bridging the negativity that exists.”

“I want to thank the Leadership Council for reaching out to law enforcement regarding this initiative. It is imperative that communities begin positive dialogue, as we are witnessing an increase in society’s polarization, including violence and senseless killings, poor relationships between law enforcement and citizens, political discord and racial unrest. Our goal is to ensure that we are proactive in Madison County to anticipate issues that lead to unrest such as what occurred in Ferguson, Missouri, and other areas across this country. We are pleased to have so many of our Madison County police chiefs meeting on a regular basis with representatives of the LCMC, education community, clergy, legislators, and the judiciary, to find ways to address the societal issues facing this county.

“Events will occur in the future, which will test the unity and the resolve of people in our area. By working together on this important initiative, everyone understands each other better and trusts each other more. This foundation will allow the various stakeholders and law enforcement to address challenging events as they unfold. Therefore, we stand prepared to provide resources and support for grant writing as this initiative expands. SIUE, including our Criminal Justice Department and Chief Kevin Schmoll, is involved because we know how important it is for our students and for citizens of this county to relate to our police officers. Because of the diversity of our campus, it is logical to hope for diversity within our local police departments. SIUE, under the guidance of Police Chief Kevin Schmoll, has been very successful in recruiting men and women of various backgrounds and ethnicities to our force, including the hiring of five African-Americans, six females and one Asian-American employed as police officers.”

“One of the many career opportunities that allow one to serve his fellow man is policing. As a police officer you will experience the best, and sometimes the worst, humanity has to offer. You will be in a position to make a difference in the lives of the citizens you serve. Police officers in Madison County, Illinois, are appreciated and respected members of our communities. We believe the positive benefits to joining law enforcement in Madison County far outweigh the negatives – benefits such as competitive salary, pension and serving your community will assist Madison County in recruiting minority officers to the Madison County police departments.”

The Pontoon Beach Police Department has also worked hard to increase diversity within its department. Chief of Police Chris Modrusic reported that since accepting the job in 2015, there has been an increase in the Hispanic population, thus creating a language barrier among its citizens. The Village has addressed this concern by hiring a bilingual Hispanic dispatcher and a Hispanic officer to close the communication gap between law enforcement and the community. In addition, the Village of Pontoon Beach recently added its first African-American trustee, Brett Ware, to their board.

“We are very fortunate to have such diversity, including one African-American male, one African-American female, one Asian male, one Caucasian female and three Hispanic males, of which two are bi-lingual, among our twenty-one person police department. When residents come into our station or interact with our officers, they feel comfortable and a relationship builds between them and the officers.”

“Our committee agreed at the beginning of our efforts that our goal must be to bring African Americans, women and other minorities to law enforcement in Madison County and that it becomes a priority to work collaboratively to identify, recruit, mentor and retain qualified candidates. Local school districts and law enforcement are working together to implement a ‘Grow Your Own’ initiative to actively recruit this area’s college, high school and grade school students to a career in law enforcement. I mentor African-American and other minority students from SIUE to assist them with finding employment at the SIUE Police Department and other law enforcement agencies. I have my mentees do ride-alongs with our police department and do their internship with us if they can. I keep in touch with them to let them know when we and other law enforcement agencies are testing.”

Alton High School will kick off a ‘Grow Your Own’ initiative this coming spring semester. “We are very pleased to begin offering a new class at Alton High School, ‘Introduction to American Criminal Justice.’ It will be a dual credit class that will be taught by retired Alton Police Officer Scott Golike. The class offers a preliminary framework for pre-service Criminal Justice students. It shows criminal justice as it originates with the police, tasked with the responsibility of direct enforcement, then the process of the courts, and then leads to corrections. I believe in a short amount of time, this will become a very sought after class at Alton High School. Other schools districts that will be involved in the “Grow Your Own” initiative include Granite City, Madison School District and Edwardsville.

“I am pleased that our Judiciary system is actively involved in this initiative. Imagine you are walking into a courtroom for your trial and you are the only minority person in the room, be it the only woman, the only man, the only Spanish-speaking person or the only black person. Will you have some concerns about whether you will receive fair treatment? Probably so. Therefore, the appearance of the Court is a critical factor affecting public confidence in the justice system,” said. “We absolutely need good judges, lawyers, bailiffs, clerks and jurors, including minorities, to bolster confidence in our courts.”

“Justice is a bedrock principle of our nation and community. When citizens are confident in the justice system and those entrusted with the great responsibility of protecting it, opportunities abound and society flourishes. When citizens have doubts or lack confidence in the institutions entrusted with protecting them, our society suffers and opportunity is restrained. Our work here is critical to fostering community cooperation and confidence in the Madison County justice system and the institutions supporting it.”

The LCMC task force will continue its work, Hightower said, and anyone with questions is welcomed to contact him at drehightower@att.net.

PHOTO: A recent meeting of the Leadership Council of Madison County.