TheBANK of Edwardsville’s Kevin Welch, a business banker in St. Clair County, was recently selected to a two-year term in the Scott AFB Honorary Commanders Program. 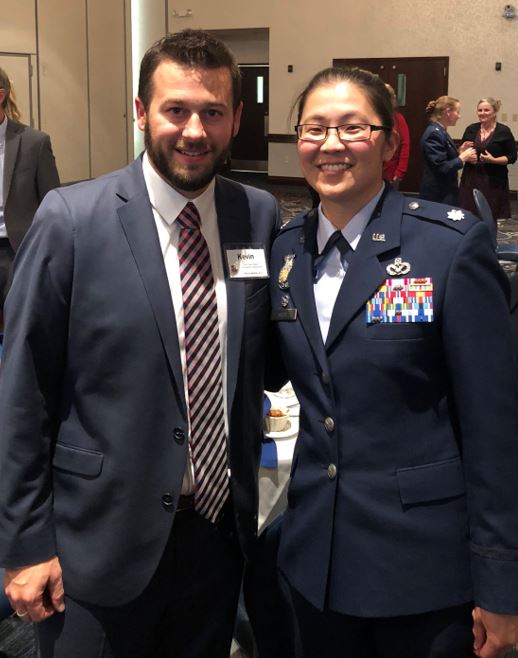 “It’s a great honor to be recognized and chosen for this role,” said Welch. “I grew up in Collinsville, and although we would randomly see a military plane and generally knew about the base, I really didn’t realize or understand the great impact that it has on our lives and our local communities. So, I’m excited to get a chance to learn all that I can about the base and its culture.”

That is the exact reason that Scott AFB decided to start the program, to build a better understanding and connectivity between the base and the businesses and organizations in our local communities.

“Through this program, we will provide the Honorary Commanders with opportunities to learn about our strategic, global military role, as well as its impact on the St. Louis metropolitan area,” said USAF Col. Leslie A. Maher, commander, 375 AMW, Scott AFB, IL. “We will introduce them to the men and women in uniform whose dedication and hard work help secure our nation’s freedoms. In the process, we want get to know them and discover how we can forge stronger connections and build positive rapport between our military community and their organizations.”

According to Welch, the economic impact alone that Scott AFB has locally is enormous.

“Scott AFB pumps $4 billion into the St. Louis and Metro East economy each and every year,” he said. “Without that contribution, our area simply doesn’t exist the same as we see it today.”

During his term, Welch will attend quarterly Honorary Commander Meetings and will be paired with a military senior leader and unit. He will be invited to unit tours, commander’s calls, promotion/retirement/change of command ceremonies and other special events.

PHOTO: O’Fallon Center Manager Kevin Welch pose for a photo with Lt. Col. Nichole Scott. Welch will be paired with Scott in the Honorary Commanders Program at Scott AFB.