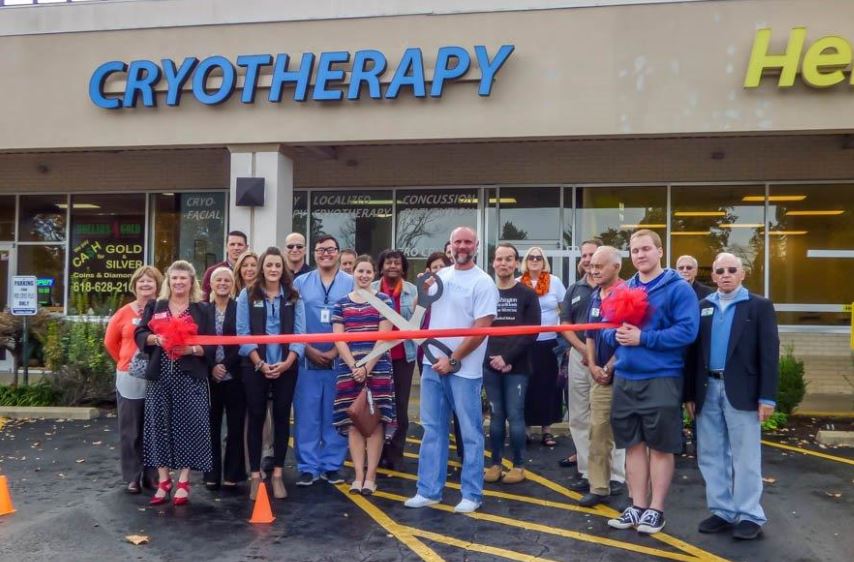 Pro Cryo Plus recently celebrated the opening of a new business that specializes in pain treatment through cryotherapy at 1937 West Highway 50, Fairview Heights.

The O’Fallon-Shiloh Chamber of Commerce joined owner and operator Rich Putnick (center with scissors) for a ribbon-cutting ceremony on Oct. 30.

Pro Cryo Plus is said to be the only facility in the area specializing in pain management, migraine relief and athletic performance recovery utilizing controlled cold exposure, also known as cryotherapy.

Cryotherapy has been featured prominently in the media including on “Monday Night Football,” “Dr. Oz,” “The Doctor’s,” “Ellen” and a popular Internet podcast, “The Joe Rogan Experience.”

Professional athletes such as LeBron James and Stephan Curry from the NBA, along with professional boxer, Floyd Mayweather, are avid users of cryotherapy and have helped increase its popularity.

Cryotherapy is the number one pain management and recovery modality used by the Nike Oregon Project, which is one of the most elite long-distance running training programs in the world specializing in the training of Olympic athletes and Olympic hopefuls.

Pro Cryo Plus uses the exact same technology that is used in all professional sports leagues to help their athletes lessen down time from injuries and to facilitate significantly faster recovery from competition. Although cryotherapy is used extensively by professional athletes, it is also used just as effectively by non-athletes who simply want to feel better, either physically, psychologically or both.

Pro Cryo Plus offers whole body cryotherapy, localized cryotherapy and cryo toning facials, each of which offers a different benefit to their users. Whole body cryotherapy involves the client standing inside of a cryosauna for up to three minutes while the entire body is exposed to cold air triggering the release of several beneficial hormones.

The benefits the hormones provide are said to include reduction in muscle and joint pain, lowered inflammation, improved range of motion in joints, increased vitality, improved mood, better sleep, faster recovery from exercise/sports and improved skin tone. Whole body cryotherapy has proven to be effective in alleviating symptoms from rheumatoid arthritis as well as fibromyalgia.

Localized cryotherapy involves the application of cold air to specific areas of the body to reduce pain and accelerate healing. The cryo toning facial involves the application of cold air to the face, neck and head to help relieve migraine headaches as well as lessen symptoms from a variety of skin conditions including rosacea, eczema, acne and psoriasis. The cryo toning facial also helps to rebuild collagen in the face which helps firm and tighten the skin.