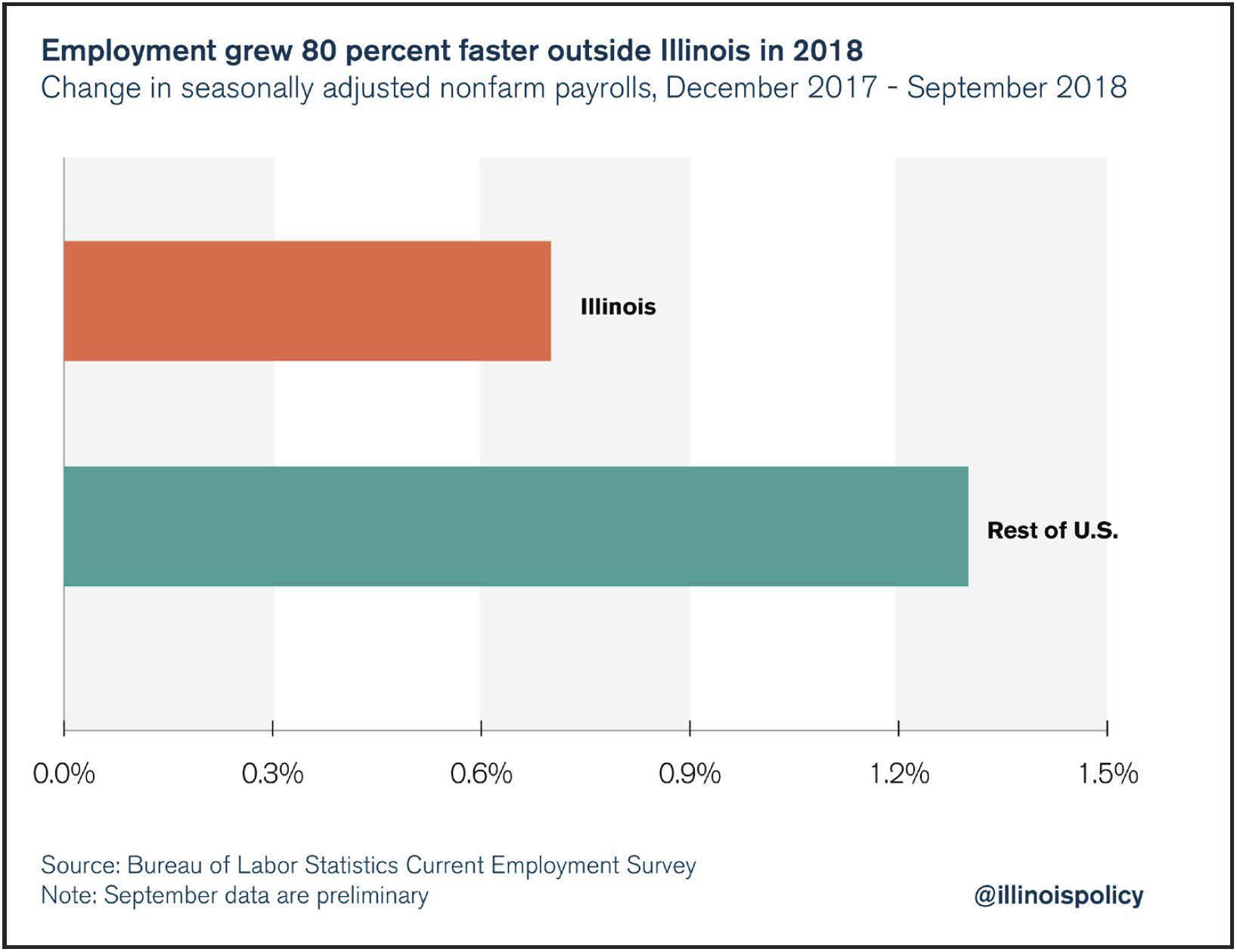 By ORPE DIVOUNGUY and BRYCE HILL
The Illinois economy added 2,800 jobs in September, according to data released Oct. 18 by the Illinois Department of Employment Security in conjunction with the U.S. Bureau of Labor Statistics.
The preliminary data show Illinois payrolls climbed 0.05 percent over the month, nearly offsetting the payroll decline experienced in August, which was the first month in 2018 to show job losses. August numbers were also revised upward to show a loss of 3,100 jobs, instead of the 5,200 job loss originally reported.
Unfortunately, though, Illinois still lags the rest of the nation in jobs growth for the year, and that gap is growing. Illinois’ jobs growth in September continued this trend, according to data from the Bureau of Labor Statistics.
Illinois added jobs in six sectors in September. The largest portion of September’s gains were driven by expansions in the education and health sector (+3,300 jobs) and the manufacturing sector (+2,300 jobs).
Aside from the education and health and manufacturing sectors, the next largest gains came from the construction sector, which added 1,400 jobs, and the leisure and hospitality sector, which added 700 jobs. The financial activities and government sectors’ payrolls expanded by 300 jobs each. Mining employment saw no change.
Four industries did experience contractions over the month of September. Professional and business services shed 2,500 jobs; other services lost 1,500 jobs; trade, transportation, and utilities lost 800 jobs; and the information sector dropped 700 jobs.
Illinois’ unemployment rate remained at 4.1 percent, unchanged from the unemployment rate in August – a level not seen in Illinois since 1999.
The gap between Illinois and the rest of the nation continues to widen
While Illinois payrolls recouped nearly all of the losses from the August decline, the rest of the nation continued to add jobs at a faster rate, as has been the case for most of the year. Since December 2017, the rest of the U.S. has expanded payrolls 80 percent faster than Illinois, according to data from the Bureau of Labor Statistics.
Employment grew 80 percent faster outside Illinois in 2018. Persistent underperformance relative to the rest of the nation has meant a sharpening contrast between Illinois’ employment situation and worker opportunities available elsewhere.
Illinois’ economic future is uncertain. And when businesses perceive more volatility in the economy (whatever the source), they tend to err on the side of higher prices, which result in more inflation, higher markups and less economic activity.
Worse, Illinois’ comparatively weak jobs growth could slow down in the event of more tax hikes to support increased government spending. Gubernatorial candidate J.B. Pritzker’s campaign promises, for example, come with a $13 billion to $18 billion tab.
The tax increase necessary to finance this level of spending could require doubling the state’s current individual income tax and could cost the state up to 132,000 jobs and $31.3 billion in economic activity.
A better approach, and one that Pritzker and all candidates and policymakers should embrace, is to halt the growth in income and property taxes by reining in the growth in government spending.
A spending cap, for example, could prevent the need for future tax hikes. In spring 2018, state lawmakers lent bipartisan support to a constitutional amendment to impose a spending cap on the state budget. Although the spending cap amendment never made it to a vote, members of the Illinois House of Representatives and Senate have pledged to reintroduce the legislation next year. The spending cap would have tied the growth in state spending to the long-run average growth in the economy, avoiding the need for economically damaging tax hikes.
Taxpayers must reject calls for a progressive income tax if Illinois is to prioritize its economic growth. State lawmakers have called for an end to Illinois’ constitutionally protected flat income tax in favor of a progressive income tax with differing rates set according to income levels. Although often sold as a tax on the rich, other state progressive income tax models Pritzker has indicated he would look to for inspiration would all hike taxes on the typical Illinois family, and wouldn’t even come close to raising the revenue he needs to finance his spending plan.
The state’s economy cannot afford a progressive income tax hike – or any tax hike – if it is to ever to close the economic growth gap with the rest of the nation. Policymakers must opt for pro-growth reforms instead.
The authors produced this report for Illinois Policy Institute.