Home prices in the Metro East are rising and a record 77 percent of consumers think now is a good time to sell according to National Association of Realtors.

The number of homes sold in most of the Metro East has increased in comparison to 2017 year-to-date. Home sales in St. Clair and Madison counties increased by 3.94 and 1.98 percent, while Jersey County increased by 2.53 percent. Monroe and Clinton Counties saw a rise of 7.79 and 8.04 percent year-to-date 2018.

Home prices rose from September last year in most of the Metro East. St. Clair and Madison County home prices rose 2.54 and 4.50 percent compared to September 2017. Home prices in Clinton, Randolph, and Montgomery all had increases over 9 percent. Madison saw an increase of 13.79 percent, bringing the average home cost to $170,056.

Realtor Association of Southwestern Illinois President Judy Ross said buying a home can seem stressful, but members are trained to navigate the process.

“They also have access to amazing resources and can connect you with programs you may qualify for,” she said.

The amount of days on market is still declining in the Metro East. Homes in Macoupin, Randolph, and Montgomery Counties saw an increase of 24.21, 22.54, and 22.4 percent faster in September 2018 compared to September 2017. Madison and Jersey counties saw a respective decline with 12.41 and 14.9 percent. Clinton County homes saw a 2.67 percent decrease in days homes were on the market, with 74 days.

Here are numbers supplied on Monday, Oct. 22, by the Realtor Association of Southwestern Illinois. 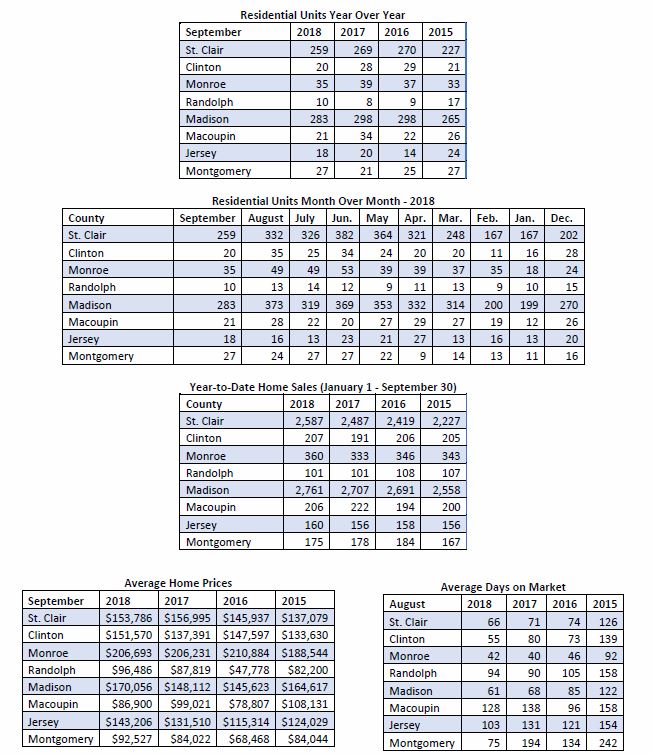