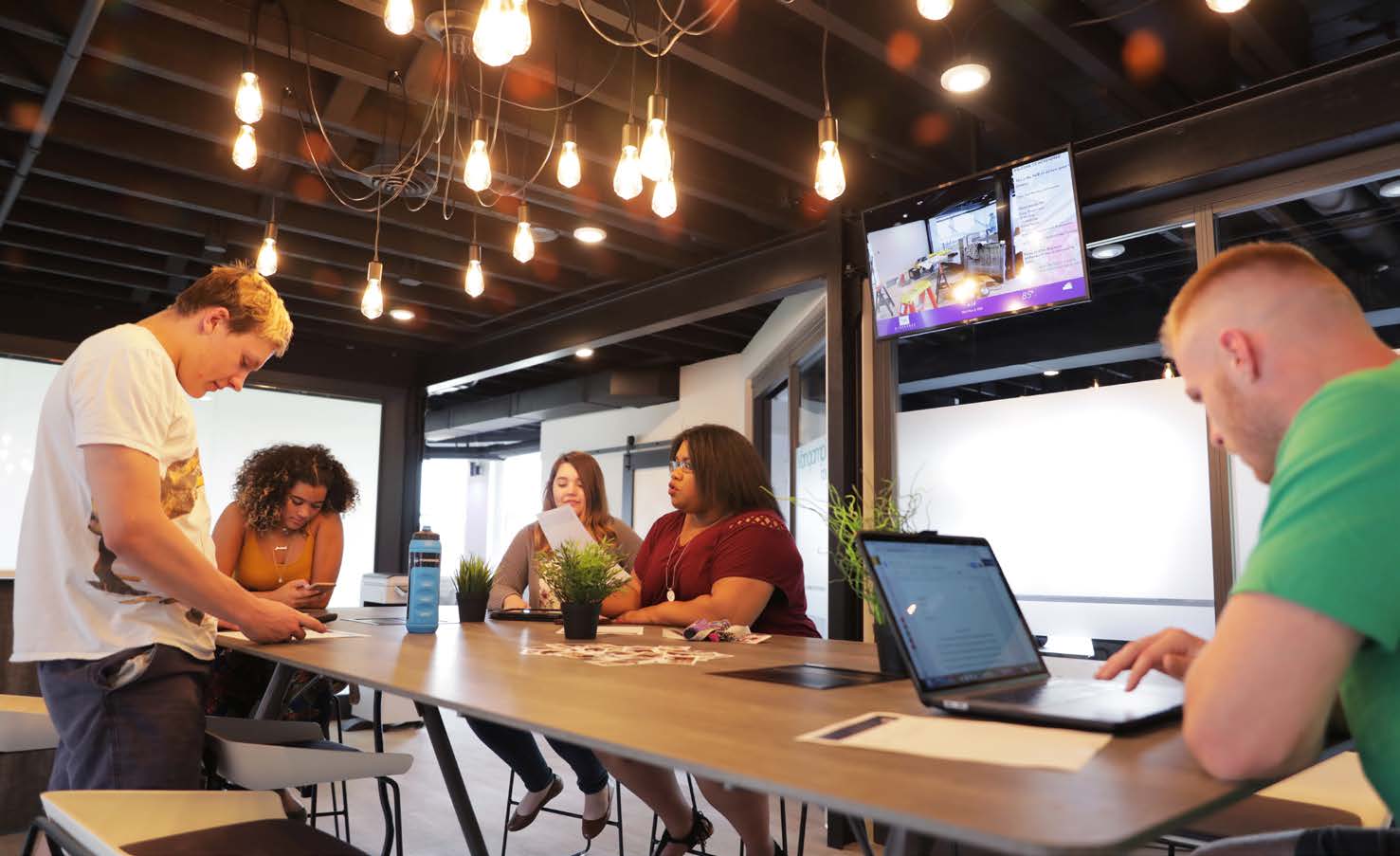 McKendree University, which last year breathed life into an Active Learning Center for its students, has gone a step further with a new, bigger space to expand the collaborative concept.
Called “theHub,” the technology-centric space is in the lower level of Pearsons Hall. The space was transformed from a former commons space into an entrepreneurially inspired layout.
Tools available to students in theHub include such creative technology as 3-D printing and modeling, virtual reality software and drone building.
The facility’s seating capacity of 50 includes three conference spaces separated by glass wall with a frosting feature that creates more privacy and can be used for projection when needed.
“This is the first full year that it has been open. It’s 24 hours, seven days a week, and students can use it at any time,” said George Kriss, the director of information technology at McKendree.
McKendree created an Active Learning Center last year, based on an idea generated by a management information systems class, a business course in which Kriss was the instructor.
The space in New Residence Hall West was utilized so much by students, and the faculty liked it so much that the president was able to find another, bigger location.
“We found this beautiful space right in the center of campus,” Kriss said.
Construction was fairly extensive. The space was essentially gutted. The building dates to the early 1920s, with beautiful, wood-rafter beams and some metal I-beams that are now exposed to give the space a bit of an industrial look that compliments the high tech glass and “sweet features” that students like.
“I believe we’ve done a really good job of marrying the old look of the building with the added 21st century technology and features,” Kriss said.
Pearsons Hall has frequently served as common space.
“It was a kitchen at one point, and a bookstore and faculty offices, and offices for the debate team. Kind of a space for students to lounge in,” Kriss said.
In other words, theHub is a natural extension of a tradition. And it’s getting a lot of use, mostly by students. Instructors can teach a class in theHub if they go through an Active Learning Certification.
“We are seeing committees and organizations meeting in there. Student-run groups. And it’s a maker space,” Kriss said. Students can do 3-D printing, build their own drones, do soldering and create printable circuits. One area of the space is more business center oriented — with movable tables that can fit into a boardroom. “Business learning cameras” allow for Skype-type interviews.
“Then, we’ve got another piece called The Range, which is a larger classroom with glass that frosts so we can put a large projection screen on it,” Kriss said. “It’s also home to our competitive cyber defense team, the 117th Regiment. They use it for practicing cyber security.”
TheHub reflects spaces that many universities are moving toward — adaptable, collaborative settings that can be used in a multitude of learning sessions.
Many innovative ideas are on the horizon. The computer science department, for instance, is working with off-the-shelf Xbox pieces to create three-dimensional physical objects that can be imported into a virtual reality system that can be manipulated or printed out on a 3-D printer. That has a lot of exciting prospects, including insertion into games.
“Or maybe you just want to print out a person’s head and turn it into a bobblehead. Both can be very fun,” Kriss said.
The whole idea of alternative learning is tailormade for today’s college students, he said.
“This generation likes to get hands-on and dive deep. Learning happens outside the normal classroom hours,” he said. “The days of the instructors ‘teaching at’ students are disappearing. It’s more of a collaborative experience.”
A group called the McKendree Cyber Academy oversees theHub. It’s a trio of directors, one from of the MBA program, one of the divisional chairs of computer science, and Kriss.
“We meet fairly regularly to discuss how we can continue to push the growth of this and, really, involve the community. Make it a regional hot spot for people to bring ideas and collaborate,” he said.
The campus plans to dedicate certain rooms in the name of donors who have helped the project. One is named for Glen Arthur “Artie” Vangampler, a 1989 graduate who died and whose family wanted to give back to the school.
The hope is to operate theHub totally through donations, Kriss said.