Average days on market is still decreasing in most of the Metro East, proving houses are selling faster than last year, real estate agents say.

The number of homes sold in much of the Metro East has increased in comparison to 2017 year-to-date. Home sales in St. Clair and Madison counties increased by 4.62 and 2.78 percent, while Jersey county increased by 4.32 percent. Monroe County saw a rise of 10.02 percent year-to-date 2018. Realtors in Clinton County reported a major 28.92 percent increase in homes as well.

A recent analysis from Freddie Mac found that even though the housing market has slowed in the second quarter, it is still expected to grow by year’s end. Mortgage rates have stabilized, and strong economic growth could prompt more homebuyer demand, according to the forecast.

Home Prices Upward trend for median prices has started to level-off in Illinois, but the Metro East increased 5.6 percent from August last year, according to Illinois Realtors. St. Clair and Madison County home prices rose 2.54 and 4.50 percent compared to August 2017. Home prices in Clinton County increased by 8.15 percent, while Monroe County reported the highest increase this month, with 18.16 percent.

“The Metro-East is one of only three areas in Illinois to have an increase in average home prices over last month, with our average home price being $142,500. That’s great news for sellers in our area as well as our thriving community” says Judy Ross, president of the Realtor Association of Southwestern Illinois.

Homes in Montgomery County sold a quick 88.48 percent faster in August 2018 compared to August 2017. Clinton County homes saw a 37.04 percent decrease in days homes were on the market. Jersey and Madison counties saw a decrease of 23.93 and 10.85 percent. While, Macoupin and St. Clair Counties also reported decreases of 7.29 percent and 7.52 percent in days on market, respectively. 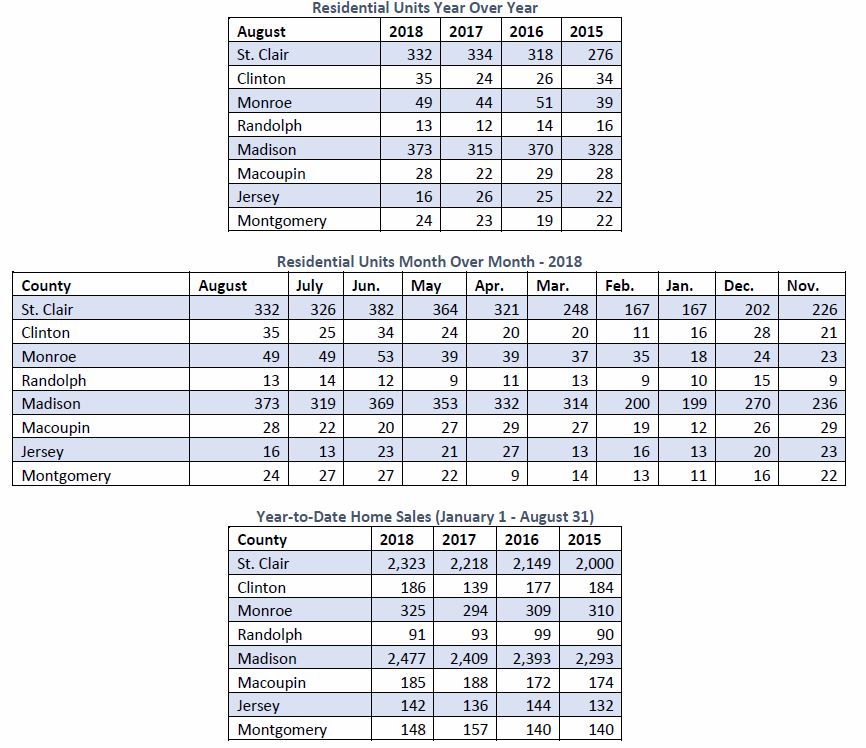