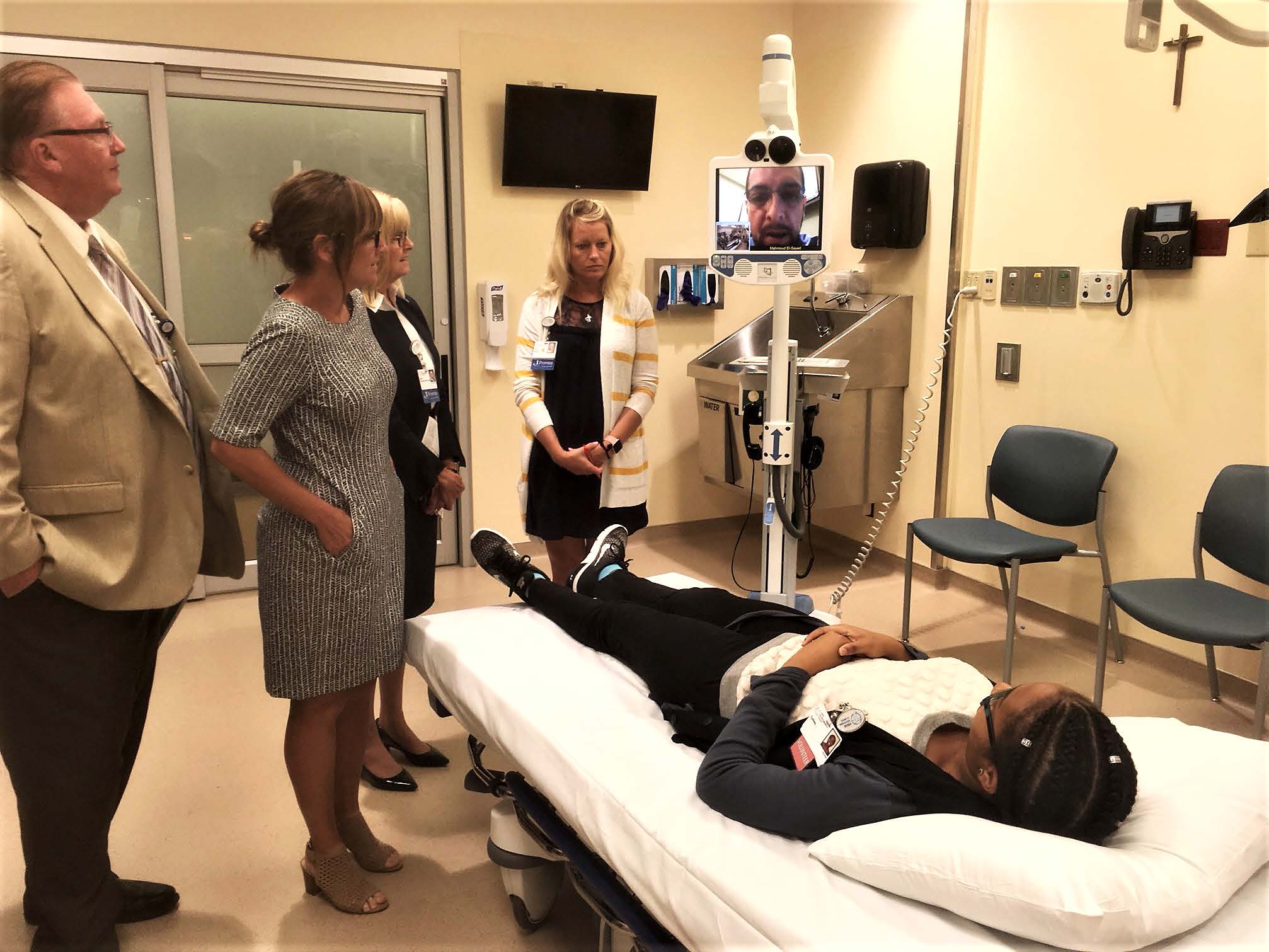 By DENNIS GRUBAUGH
One by one, the doctor on the two-way monitor asks a patient lying on the gurney her condition, ticking off a series of questions aimed at coming up with a potentially long-distance diagnosis.
“Can you tell me what’s going on? What happened?” the doctor asks.
“My side starting drooping,” the patient responds. “I started feeling a little dizzy. I came in just to make sure it wasn’t a stroke.”
“When did this happen?” the doctor asks.
“About an hour ago,” the patient says, talking back to the monitor.
“Do you have other symptoms besides dizziness?” the doctor asks, before continuing on with a short, but probing line of questions.
Doctor and “patient” in this case don’t really have a medical relationship. They are actually colleagues at HSHS St. Elizabeth’s Hospital in O’Fallon, demonstrating a potentially lifesaving protocol that shows the hospital in the center of telehealth technology.
Dr. Mahmoud El-Sayed, an intensivist who sees patients in the intensive care unit, says the right questions will lead to the proper diagnosis — when time is a critical factor. His patient for the demonstration is Cydney Parker, a volunteer at St. Elizabeth’s.
El-Sayed says the line of questions can be neurological in nature, but it really depends on the problem being accessed.
The two-way unit is called a telemedicine robot and is used primarily for stroke diagnosis, said Erin Kochan, project manager of Telehealth at the hospital. Most of the patients involve advance notice that sets off a strict protocol.
The ER physician does a quick consult with the patient, who is then taken for imaging. Within minutes, the doctor is on camera, ready to do the consult exam.
Any physician licensed in Illinois can participate in the telehealth services.
“They can be anywhere in the world as long as they are licensed in the state,” Kochan said.
A doctor linking up with the robot can access the service through an app via a PC or iPhone
“You can’t replace a bedside physician with this technology, but it helps a lot,” El-Sayed said.
Telehealth services in general received a giant shot in the arm late in August when Gov. Bruce Rauner signed into law Senate Bill 3049. It is effective Jan. 1, 2019, and requires Medicaid to provide reimbursements for behavioral health telehealth services. Prior to the passage of the legislation, Illinois laws and regulations limited telehealth use and reimbursement, especially for persons insured by Medicaid. The legislation will expand access to telehealth behavioral services for rural, underserved and disadvantaged patient populations throughout the state.
“We know it will continue to expand the services we can provide through telehealth,” said Dr. Gurpreet Mander, chief medical officer at HSHS St. John’s Hospital in Springfield and executive director of the Illinois Telehealth Network.
HSHS has been a key advocate of telehealth technology in Illinois, founding the Illinois Telehealth Network through a HRSA Rural Health Network Development grant, other federal grants, and matching grants from the Hospital Sisters of St. Francis Foundation. Today, the network consists of 26 health organizations across the state, both HSHS affiliates and non-HSHS affiliates.
State Rep. Katie Stuart, D-Edwardsville, was invited with local media to watch the robotic demonstration last month in O’Fallon. Telehealth Project Manager Kochan conducted the process, with the help of doctor and patient volunteers.
The device is used in O’Fallon about 15 to 20 times a month, Kochan said, between stroke and inpatient neurology.
Speed and efficiency are among the advantages, said Patti Fischer, president and CEO of HSHS St. Elizabeth’s Hospital.
“Another one, especially in smaller hospitals, is that patients can stay there and don’t need to be transferred in a lot of situations,” she said.
Such transfers can be very stressful, El-Sayed explained.
While it’s in use at O’Fallon because SSM Health Cardinal Glennon physicians are physically on site, the robot is used at other HSHS hospitals to see pediatric patients.
“That can really be helpful during the cold and flu season,” Kochan said.
The device operates off of a high-speed Internet hookup, and the vendor will notify the hospital if the system is ever offline. At St. Elizabeth’s the system is leased, at some of the other HSHS hospitals the device has been purchased.
Dr. Loren Hughes, who is president of HSHS Medical Group, said the group uses AnyTimeCare.com, an urgent care service that allows it to connect with patients outside of office hours through video technology.
“We do hundreds a month with that, it’s just exploding in use,” Hughes said.
Telehealth at HSHS boasts 24 sites that use the technology with 10 specialties represented. Eight additional programs for telehealth are currently in development. Since the inception of the services, there have been 7,000 visits. All four divisions of HSHS – central Illinois, southern Illinois, eastern Wisconsin, and western Wisconsin – are using tele-stroke services and anytime virtual care for consumers. Other services include psychiatry, cardiology, critical care, and neonatal intensive care.
In the first four years of the HSHS tele-stroke program, more than 1,800 emergency room patients received care from a neurology specialist. Led by HSHS St. Elizabeth’s Hospital, O’Fallon and HSHS St. John’s Hospital, Springfield, services are provided to 14 hospitals with 24/7 tele-stroke emergency department coverage in mostly rural sites. In addition, average neuro specialist consult response times are an average of three minutes or less.