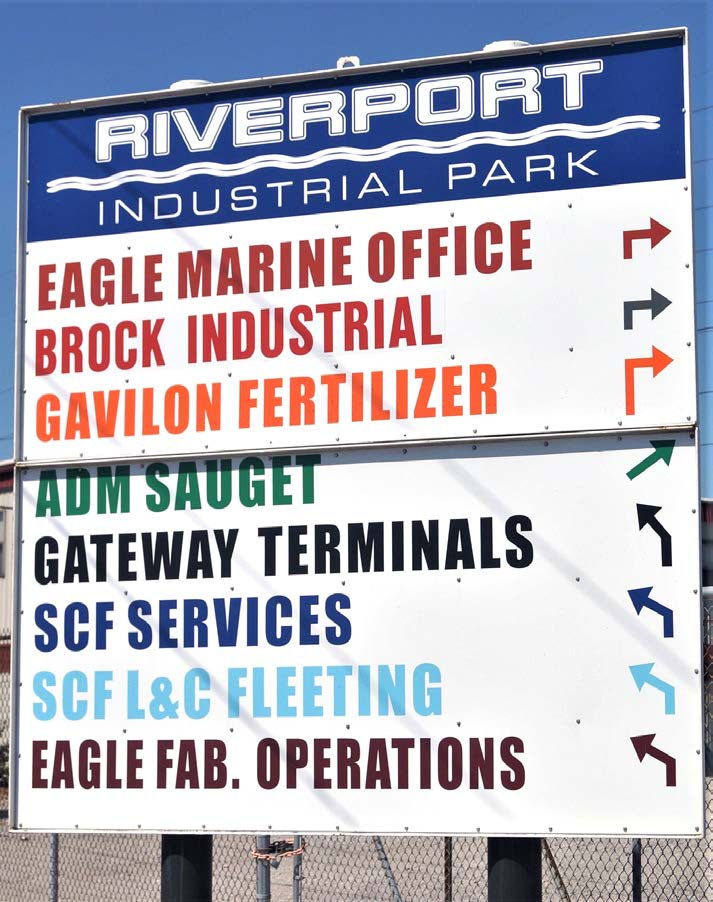 By ALAN J. ORTBALS
Sauget, Ill., forms the southern end of what has become known as the Ag Coast of America. Multiple materials handling companies line the riverfront, and some of them have come from around the world.
With the blast furnaces at U.S. Steel Granite City Works fired back up, Watco Companies, LLC is supplying coal to the mill. The coal comes in by barge and is off-loaded to train or truck, then transported to Granite City on a daily basis.
Seacor Marine, an international company with headquarters in Houma, La., and Dubai, has built a transfer facility on the Sauget riverfront that brings in products by truck, rail and pipeline for transfer to barges. It includes four, 100,000-gallon tanks for liquid storage.
Seacor has been joined by Gavilon, a commodity management firm located in Omaha, Neb., that ranks 13th on the Forbes list of privately held companies. Its focus in Sauget is on its fertilizer business.
Eagle Marine Industries manufactures barges on the Sauget riverfront and two global commodities companies are nearby, the Louis Dreyfus Group, headquartered in Amsterdam, and Cofco Corp., a Chinese company.
“What’s going on on the riverfront in Sauget is monstrous,” said Rich Sauget Sr., president of East County Enterprises. “These unit trains of between 80 and 120 grain cars come in.  They have hatches on the bottom to release their grain from the hopper cars and they have 24 hours to unload. A lot of these trains are moving as they are unloading. It’s hard to describe how big of an operation this is.”
Riverfront land in Sauget and Cahokia is becoming scarce, but Sauget says there is still 450 to 500 acres available in the nearby Sauget Business Park.
“On one side of the park is a 100-acre rail yard,” Sauget said. On another, the third busiest airport in the state of Illinois. On the east side is I-255 providing ready truck access east, west, north and south. It’s also in an Illinois Enterprise Zone and a Tax Increment Finance District. We have everything you need.”
Some of the major tenants of Sauget Business Park are Afton Fabrication, the 255 Logistics Center, Fed-Ex Ground, Gasket & Seal, Holten Meats, Hulcher, Mid-America Fiber, Peterbuilt Truck, R&L Transfer, Treehouse Foods, Stellar Manufacturing and Universal Air Filters.

Regional Freightway on roll with $400 million in infrastructure