It started with the Illinois Department of Transportation’s announcement in May that the project to replace the Chain of Rocks Bridge carrying Interstate 270 traffic over the Mississippi River had been funded and included in the department’s five-year construction plan. The $220 million project is a critical element of the overall plan to improve Interstate 270 from Interstate 70 in Missouri to Illinois Route 111, replacing the existing four-lane bridge with a bridge that can accommodate six lanes, helping ensure it can handle the large freight flow increases projected for the region.
June brought the announcement of $18.7 million in funding through the new Illinois Competitive Freight Program to advance six more infrastructure projects that will further enhance the region’s freight network, including more than $13 million for a new interchange at Interstate 270 and Illinois Route 111. 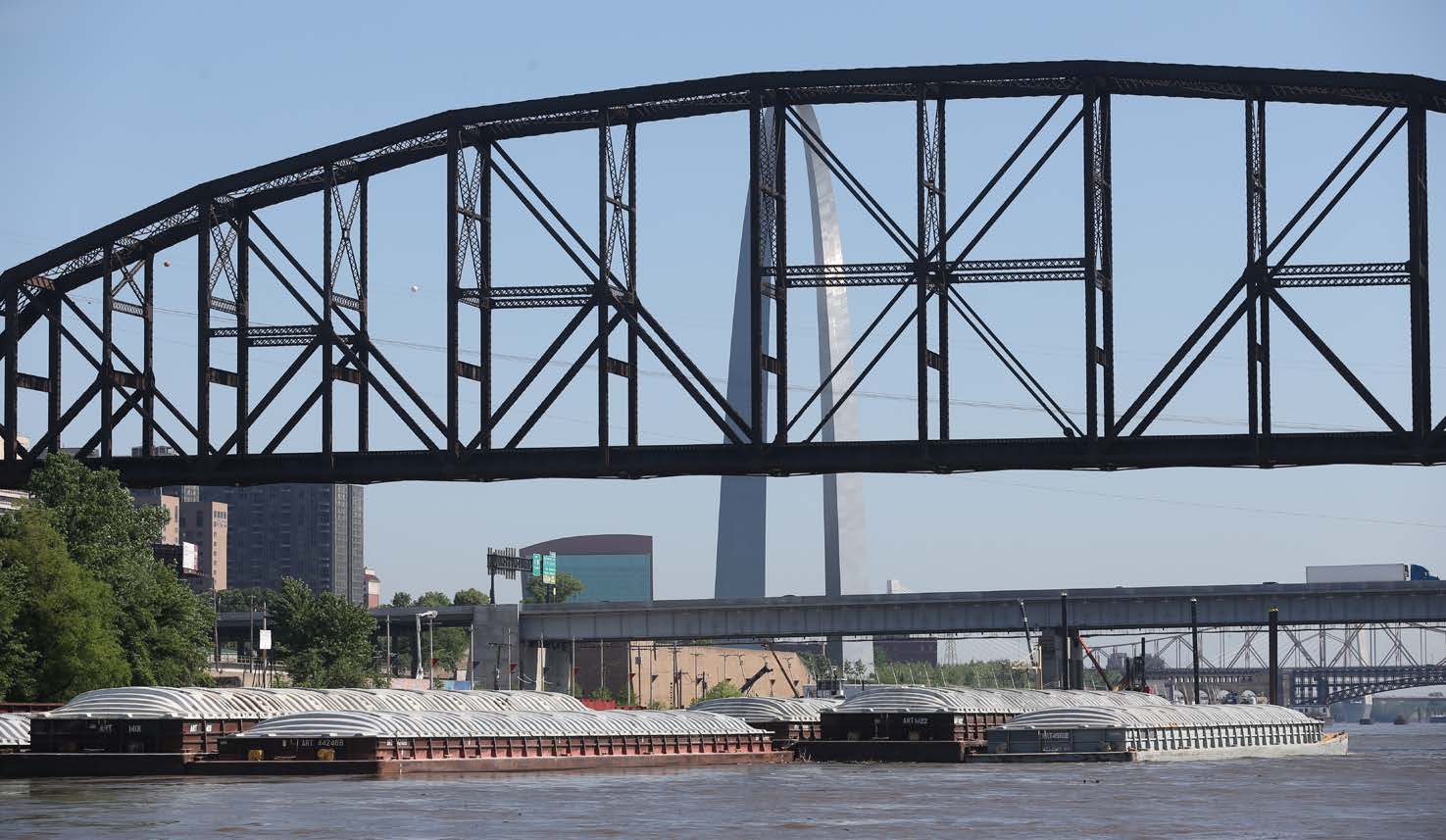 And just last month, the Terminal Railroad Association of St. Louis announced it was moving forward with plans to rebuild the Merchants Bridge across the Mississippi River just north of the McKinley Bridge. That $172 million project should start construction before the end of this year and ultimately help ensure the bridge continues to serve six Class I Railroads and Amtrak.
“Just those three projects announced in the past three months will bring more than $400 million of construction work to the bistate region, and that is fantastic,” Lamie said.
Lamie pointed out those projects are in addition to nearly $1 billion invested in new construction of roads and bridges within the same corridor along the Mississippi River over the last four years for nationally significant projects like the Interstate 70 Stan Musial Veterans Memorial Bridge, Illinois Department of Transportation’s Relocated Illinois Route 3 project, IDOT’s Martin Luther King Bridge Rehabilitation and Connector Ramp and the Missouri Department of Transportation’s extensive renovation of the Poplar Street Bridge.
“We’re making infrastructure a priority,” Lamie said.
“It’s a regional success,” said John Nations, president and chief executive officer of Bi-State Development, under which the St. Louis Regional Freightway operates to give the region one voice to market freight assets and advocate for the region’s role in logistics and the freight economy. “We’ve received recognition from the U.S. Department of Transportation for the model we’re using for public-private partnerships in pursuing transportation priorities, plus the fact that it’s a bistate initiative and we have over 250 municipalities, 15 counties and two states working together. This is a success at a national level and it’s because of that bistate leadership and support group.” 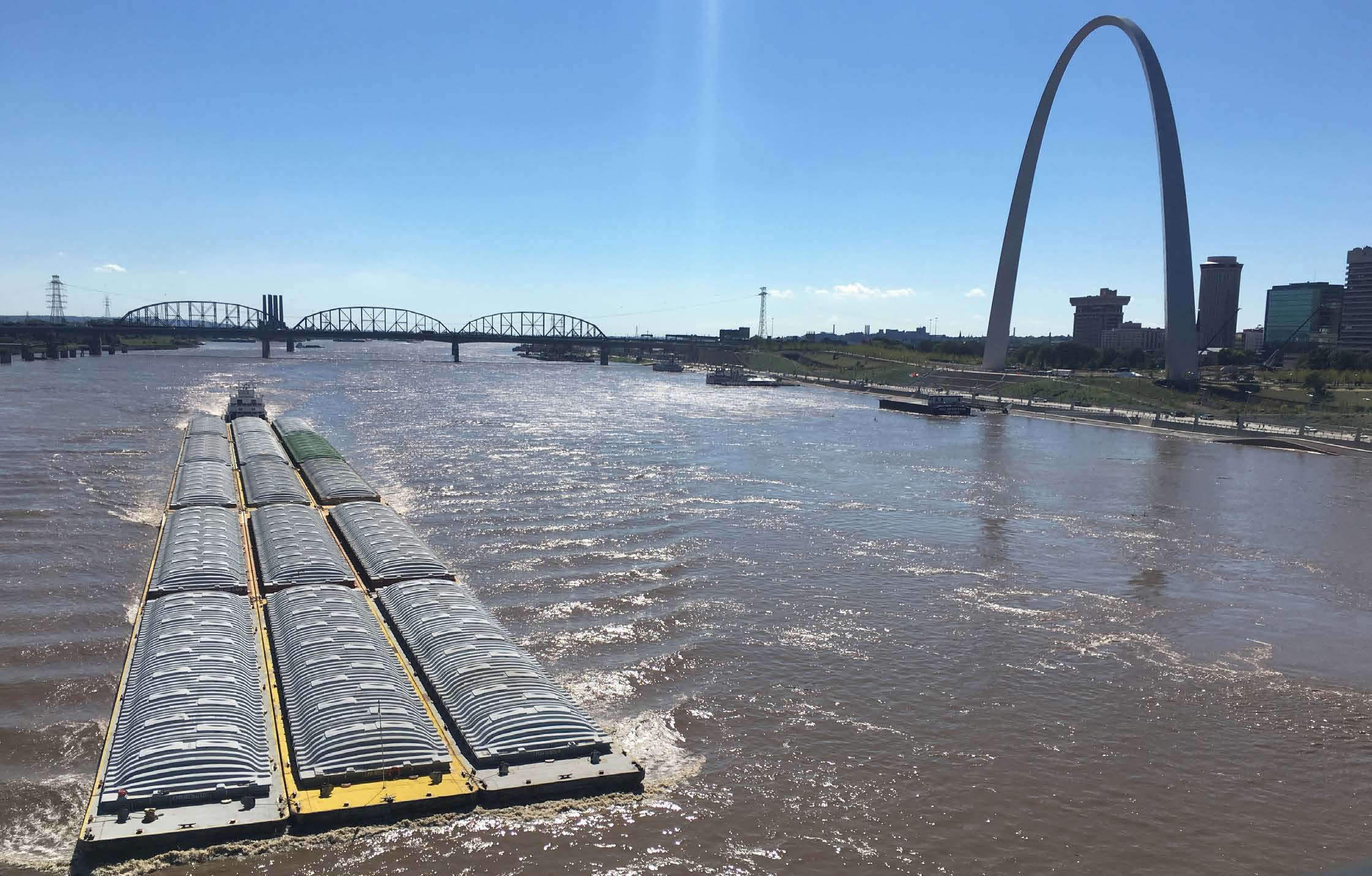 Also noteworthy is the public and private sector investment of approximately $200 million in barge and river terminals over the last eight years within this same corridor, home to a 15-mile stretch of the Mississippi River that is part of the now-branded Ag Coast of America.
“Over this relatively brief span of time, we’re well over one and a half billion dollars of public and private multimodal infrastructure work in this key corridor,” Lamie said.
“Over the last three years, working with both the public and private sectors has proven to be an effective way of spurring infrastructure investment,” she added. “We’re helping elected leaders and DOT’s better understand how freight is moving through the region and the value of investing in infrastructure in terms of efficiency, reliability, on time delivery and reducing transportation costs. Thanks to this bistate collaboration with public and private sector leaders helping set and support infrastructure investment priorities, the region continues to successfully compete for infrastructure funding and deliver nationally significant projects that positively spotlight the region’s leadership and role with infrastructure investment.
A case in point is the Interstate 270 interchange at Illinois Route 111 which IDOT is funding through the Competitive Freight Program because of the significant role it will serve supporting economic development. The project will support the tremendous industrial real estate development at Gateway Commerce Center and Lakeview Commerce Center and the expansion potential at the new Lincoln Logistics Park in Pontoon Beach.
“The region not only had record-setting years in terms of infrastructure development, but also record-setting years for industrial real estate construction and leasing activities,” Lamie said. “We are promoting the regional success by targeting industrial real estate brokers and developers representing manufacturing and logistics companies outside the region focusing on three key factors contributing to these records.”
First is workforce, said Lamie.
“We have the workforce and we’ve demonstrated we can deliver the employees needed. When Amazon came to Edwardsville, they said they needed 1,000 employees and the region delivered twice their original projections; now they continue expanding their presence across the region.”
The second reason the region is attracting logistics and distribution facilities is the fact that developers have confidence to build speculative warehouses here.
“When they decide to build spec, they don’t have a tenant ready to sign on the dotted line. But, they’re confident that when they invest those dollars they’re going to be able to sign a tenant quickly, allowing e-commerce companies to pick our region. Tenants have been impressed with the speed of warehouse build out and completion of build-to-suit projects,” Lamie explained.
The third contributing factor, according to Lamie, is the region’s world class freight network. “The map of our interstate system shows Interstates 44, 55, 64 and 70 provide direct access to all corners of the United States,” Lamie said. “And you can see the intermodal connectivity our region provides with the interstates’ close proximity and access to the region’s six Class I railroads, ports and river terminals and to international air cargo with MidAmerica St. Louis Airport and St. Louis Lambert International Airport.”
That intermodal connectivity is fueling the plans for a large container cargo project potentially envisioned for Herculaneum, Mo., south of St. Louis. American Patriot Holdings, LLC, of Miami, Fla., is planning and designing new container vessels that will be able to hold up to 2,500 containers and travel up to speeds of 13 mph along the Mississippi River, compared to a standard barge’s speed of 5 to 6 miles per hour. The St. Louis region, along with ports in Cairo, Ill., Kansas City, Mo., Little Rock, Ark. and Memphis, Tenn., were all identified as potential ports for a new container on vessel service operated through the Plaquemines Port Harbor and Terminal District at the southern end of the Mississippi River in Louisiana. Lamie has been contacting other ports throughout the Midwest, including Kansas City, Paducah and Cleveland, to better integrate the supply chain system in the St. Louis region with theirs and, more importantly, to try to create the volumes needed to support the container trade.
“American Patriot Holdings is looking at the St. Louis region because of the ability to consolidate and deconsolidate large amounts of product at one location,” said Lamie. “But the key to its success is multimodal connectivity and the ability to distribute freight volumes using a hub and spoke concept supported by six Class 1 railroads and four interstate highways.”
Lamie is scheduling a meeting in late August that will gather shippers and carriers from across the nation with American Patriot Holdings in St. Louis. APH will release the findings of a feasibility study that evaluates 15 states; identifies the market for commodities and freight flows; and shows the cost advantages of using this new container on vessel option for transportation.
The meeting will continue the dialogue that was front and center back in May, when the St. Louis Regional Freightway teamed with the Inland Marine Expo and the Institute of Transportation and Trade Studies to host the first FreightWeek STL conference event in St. Louis.
“We spent four days talking about innovative ways to improve freight movement throughout the nation with an emphasis on the barge industry,” Lamie said. “Each topic focused on what was going on in the bistate region and what our role was nationally and globally and how we were part of those discussions from an innovative perspective. 2,500 industry leaders converged on downtown St. Louis and left with the impression this region is on the cutting edge. The St. Louis region is where it’s happening. They left with the understanding that we have a very efficient freight network, and this is the place to come for manufacturing and logistics.”
“We’re pleased that the St. Louis Regional Freightway is more than fulfilling the role originally envisioned for this entity when we began,” said Nations. “Promoting and presenting the opportunities for the region to expand the freight and logistics network is exactly what the freight district was designed for.” 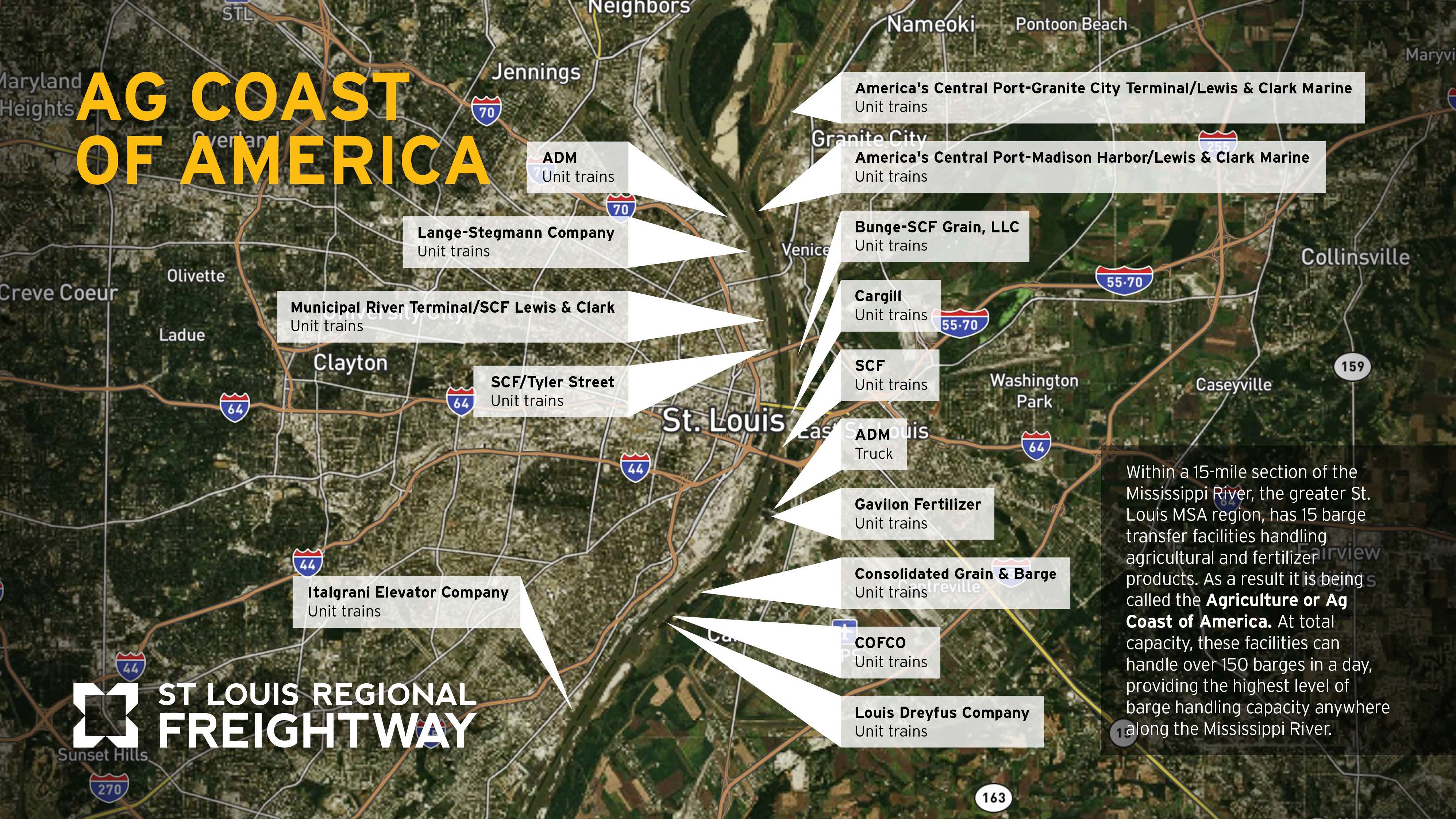