By DENNIS GRUBAUGH
Poettker Construction Co. is sticking with its roots by starting construction on a new corporate headquarters and warehouse in the firm’s hometown of Breese.
Company officials took their time enjoying last month’s groundbreaking. They didn’t have the same luxury in 1986 when the company was applying for benefits under the Tax Reform Act to build the original headquarters.
“In business you have to take advantage of every financial maneuver you can,” said Charles Poettker, the company’s CEO and founder. “We had to be moved into that building before the end of 1986 in order to take advantage of accelerated depreciation. We moved in before the architect was finished designing it. We didn’t take the time for a groundbreaking ceremony.”
He added: “We’ve done so many groundbreakings in so many states, but this is the first one for ourselves.”
The new headquarters is going up just south of Poettker Construction Co. at 400 South Germantown Road, Breese. A large gathering was held July 9 at the Clinton County site, followed by a reception at nearby Breese Jaycee Park.
The new headquarters will be completed in the summer of 2019.
Erika Kennett, who is manager of the Southwest Area of the Illinois Department of Commerce, was present for the groundbreaking and read a congratulatory letter from the governor. She had assisted the company in applying for EDGE tax credits, a local economic development tool that aims to promote job creation in Illinois through the award of tax credits to eligible businesses.
Under the terms, the firm commits to a project that will include a capital investment of $4,744,959, the state said. The project will result in the creation of 10 full-time jobs above the existing 79 full-time jobs, the state said. The company considered St. Louis as an alternative expansion site, according to the state filing.
“I’m proud that the city of Breese could be a part of making sure this building was going to be built here,” Mayor Charles Hilmes said. “It means more homes in Breese, it means good-paying jobs and quality of life that every resident works hard for. Poettker Construction is part of that whole concept.”
Hilmes, a former junior high teacher, said he had various Poettker family members as students. All of them are now part of the construction company team.
State Rep. Charlie Meier, R-Okawville, who said he knows Poettker from its early days of work for Casey’s and Walmart, said the company now does business in many states.
“It was important to keep Poettker in Breese,” he said.
Keith Poettker, president of the company, said the employees were the reasons for the company’s continued growth and it is right for them to be comfortable in their surroundings.
“Our employees operate at such a professional and excellent level that we’ve got to provide better accommodations. Without their excellence this would not be possible,” he said.
Poettker, which was launched in 1980 focusing on commercial and light industrial work, has built itself into a national player, performing major projects in retail, hospitals, schools and federal work, among others.

“Some of the retail projects we do: These should be 10-month projects and we’re figuring out how to do them in five months,” Keith Poettker said.
The new building will enhance the employees’ ability to communicate with each other. Operations are now spread across five buildings at the site. 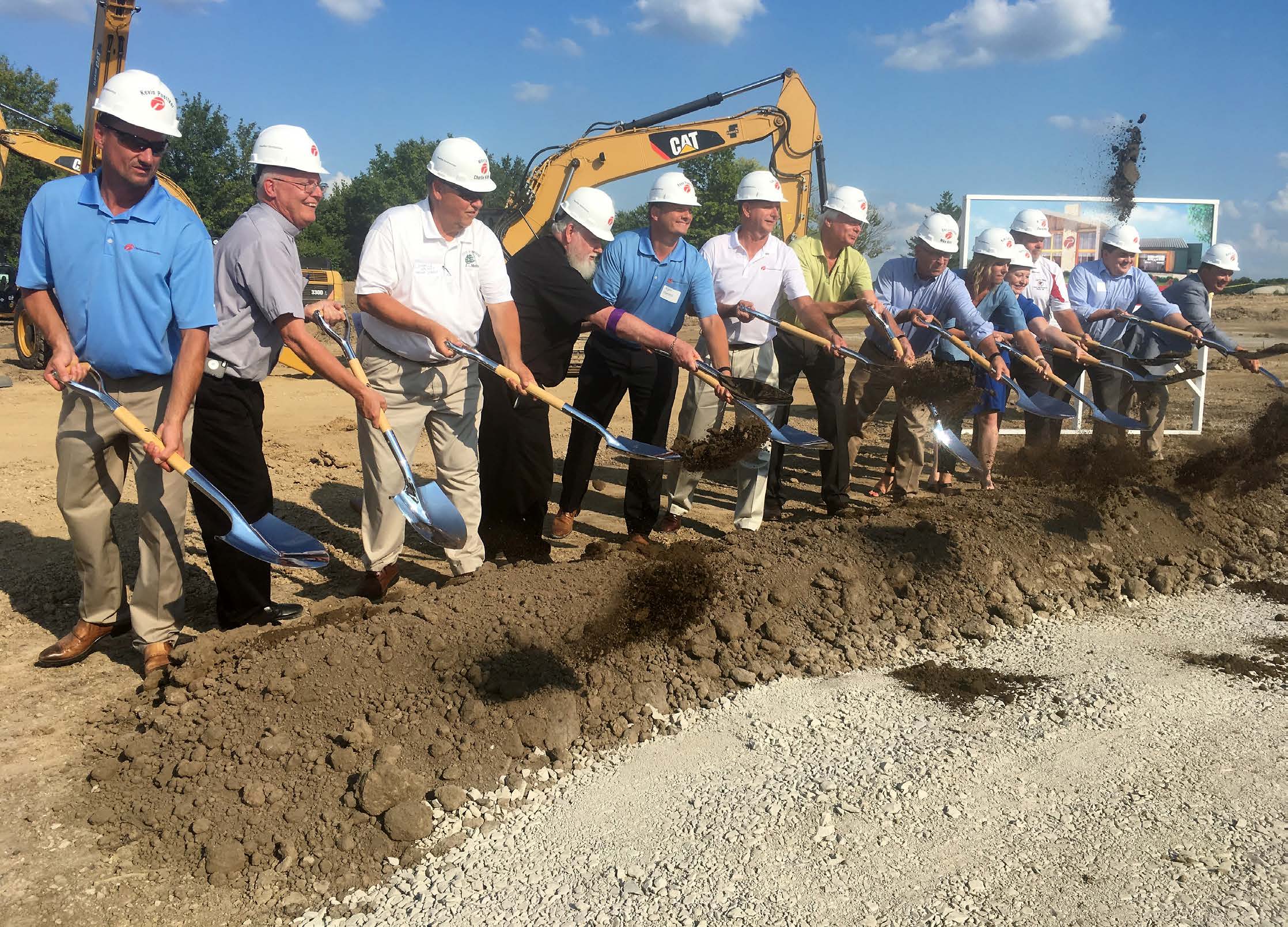 Keith Poettker said the structure will be “a marketing tool for potential clients. It will showcase our capabilities.”
It is important from an employee recruitment standpoint to do the project right, he said.
“We’re in a talent war these days — which is a good thing, because we’re in a prosperous economic environment. We’re going to do everything we can so we can retain our top talent so we can continue to grow as well as recruit. Hopefully, this building will accommodate that to some degree,” he said.
Architectural and structural detailing unique to historic German “bank barns” — barns built into a hillside – serve as inspiration for the new headquarters design. Like most traditional bank barns, the headquarters features a central building with high ceilings and exposed connections with interrelated structures connected to the central structure.
A longtime, local architectural collaborator, Oculus Inc., served as the designer.
“We chose local firms and consultants throughout the development of our vision and their participation has been key to the high quality of the final product. We’re very proud of our collaboration with Oculus in creating a building design that echoes our past and our hometown as it positions us to compete better in the future,” Keith Poettker said.
To achieve the earthen bank aesthetic of traditional barns, Oculus worked closely with local landscaping company, Outdoor Creations, of Breese, to create a drop-off exterior at the back of the building. The Poettker company describes it this way:
“The back features a walk-out basement with a covered gallery that echoes passages built on the sheltered sides of German barns. The gallery leads to a walkway surrounding an existing lake. The design calls for materials and finishes that recall the textures of a working barn: stone foundations and signature walls, tongue and groove wood and metal fittings. The sharp pitch in the spine of the central roof is reminiscent of traditional barn roofs and serves as a core visual element that pulls the side structure together into a unified, organic whole.”
“Working with Poettker to bring a new, state-of-the-art facility in the Breese community is a joy,” said Ron Reim, executive vice president and co-founder of Oculus Inc. “They wanted the aesthetic of their new headquarters to complement the history and values of the community. That moved us to consider the beauty and functionality of old German livestock and grain barns—seamless with the setting, beautiful to look at, and 100 percent functional.”
Aviston, Ill.-based Netemeyer Engineering Associates Inc. served as civil engineer for the new headquarters design. IMEG provided structural engineering services and BRiC Partnership served as the coordinator for elements that included mechanical, electrical, plumbing and fire protection.
Carrollton Bank is assisting with financing.

POINT: Should Medicaid recipients have to work for benefits?