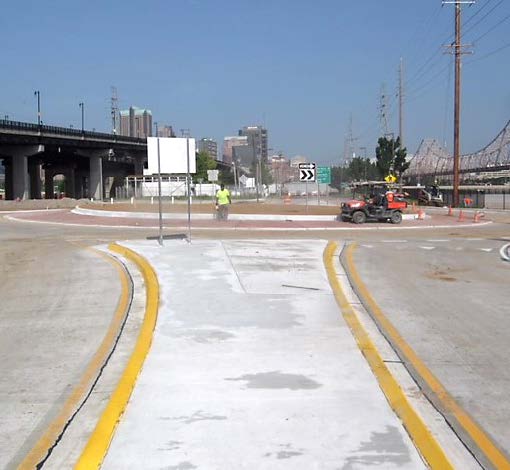 A substantial revamp of the infrastructure along the East St. Louis riverfront is more than half complete with truck traffic now using some of the overhauled roads and potential developers starting to show interest.
Phase 1 of the $8.1 million River Bridge District project is all but done, involving the reconstruction of about a mile of Front Street between two large grain operations, Cargill to the south and the Bunge-SCF operation on the north. Phase 2 is now underway, with some of the most visible work being a roundabout constructed at the entrance to the Casino Queen on River Park Drive.
Key to the overall project was a decision by the two grain operators and the casino ownership to contribute $500,000 each to the work. A number of other sources stepped in to finance the project.
“While we are the recipient of a $3.5 million Federal EDA grant, many other public and private sources of funds were contributed,” Terry W. Beach, executive director of St. Clair County Intergovernmental Grants Department, and the county’s economic development director.
The low bidder on both phases of the project was Baxmeyer Construction Co., of Waterloo.
Other contributors to the project are the Economic Development Administration, $3,537,052; the Illinois Department of Transportation (TARP funds), $124,795; the Southwestern Illinois Development Authority, $1.5 million; St. Clair County Transit District, $900,000; and the Metro East Park and Recreation District, $500,000.
Another big player has been Illinois American Water Co. along Front Street.
“All total they spent just over $9 million ($9,070,000) on the project to install roughly three miles of new large diameter mains. There were five active mains in the street that were replaced. They ranged from 12 to 24 inches in diameter,” Beach said.
The oldest of the mains dated to the early 1900s and the newest went in around the time the Casino Queen was built in the 1990s.
“These mains carried water to the East St. Louis, Sauget, Cahokia and Columbia areas. At one time Dupo also took water from these mains,” Beach said.
The mains were replaced with two new ones. One is routed in an easement adjacent to the street and then around the back of the Casino Queen, and the second is in the street.
Phase 1 was mainly the overhaul of Front Street and Trendley Avenue, widening them to 30 feet to accommodate large vehicles. Up to 500 farm trucks a day pass through that area during harvest season, Beach said.
“It’s busy throughout the year, but especially harvest season,” he said.
The work, of course, is intended to get trucks off River Park Drive by using a newly improved, circuitous route that includes connections leading to the access roadwork built for relocated Illinois Route 3 and the Stan Musial Veterans Memorial Bridge.
That allows trucks coming in from the north, east and west to avoid River Park Drive and get to Front Street, about a quarter of a mile from the Bunge-SCF site.
Casino Queen wanted the roundabout entrance to further dissuade trucks from using that route.
“East St. Louis imposed a weight limit so that trucks going to Cargill will go down Main Street to Trendley,” Beach said.
Bunge and Cargill both said their customers like the improvements.
“Front Street wasn’t too bad going toward Cargill, but going north of the Queen, Front Street was loaded with potholes and the road was very narrow,” Beach said. “It would hold water when it rained. Sometimes the truckers and others going to the (Illinois American) water plant would have to drive through two feet of water, sometimes greater. It was a horrible situation.”

For all intents the first phase is completed other than the paperwork Beach says he has to submit to the Federal Economic Development Administration.
Phase 2 will include reconstruction of B Street and Missouri Street, two side streets that serve to connect up the riverfront roads.
The second phase will also connect up the trail section that remains incomplete between the McKinley Bridge in Venice and the Eads Bridge in East St. Louis, part of a plan to connect biking trails on both sides of the Mississippi River.
The completed trail will run on the Missouri side from about Laclede’s Landing all the way up to Chain of Rocks Bridge. The trail would cross the river and come south along the levy, eventually to East St. Louis.
Money has been made available for the trail by the Metro East Park and Recreation District.
The trail timetable is to be determined. But otherwise, Phase 2 is expected to be wrapped up by the end of the year.
“The most important part for us right now are the roads to accommodate economic development. The Park and Recreation thing, we’ll still have to go out for bid on,” Beach said. 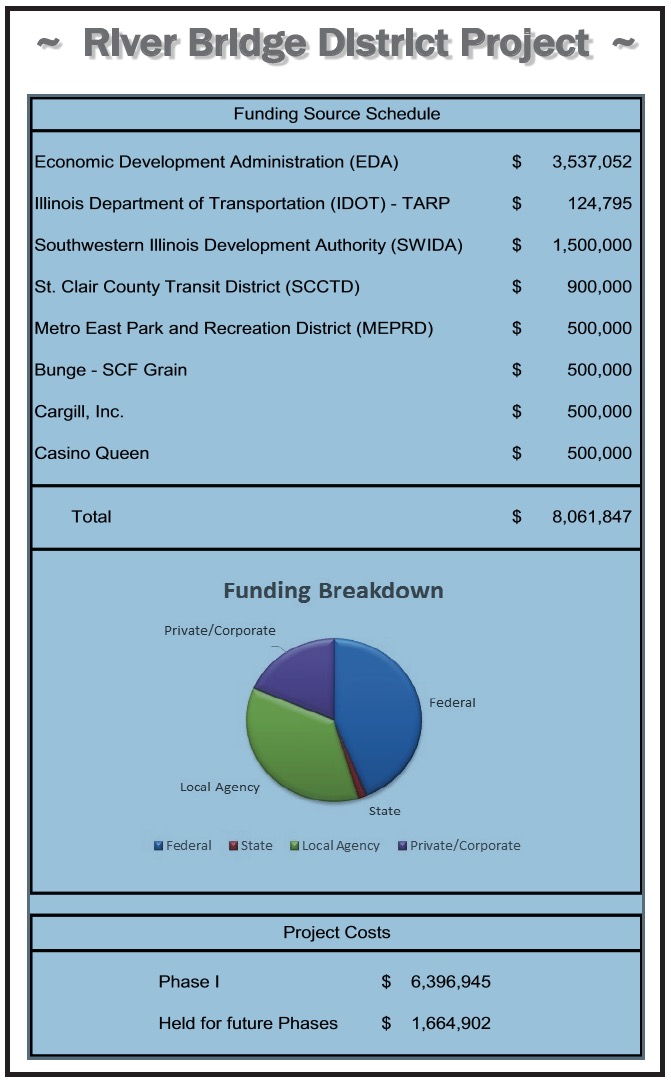 The Route 3 realignment and the improvements to Front Street have “opened up a couple hundred acres, maybe 300 acres,” for potential development by other agribusiness and distribution companies.
Interest is being shown by at least one serious party. Beach said he has been contacted by one firm that he qualifies as an LTL — or less than truckload — carrier.
“They have expressed an interest in property just south of the new Route 3 exit. It’s in East St. Louis across the interstate from the old stockyards area.” The company would build what he called a “cross dock,” with perhaps 50-to-80 truck docks where goods could be moved between trucks for reshipping.
“Trucks would come in, say, from Kansas City. They would unload their product, it would be scanned and a forklift would take the product to a truck dock on the other side and load it onto a truck that’s going to Indianapolis. Other things coming in for Indianapolis, coming from Omaha or elsewhere, would be loaded on to the new truck.”
The comingling of freight would be similar to what freight railroads do in humpyards, he said.
“They are looking at us and they are looking at a site in St. Louis city. If they are looking somewhere else, I am not aware of it. They seem to have expressed an interest in the site because the new Route 3 opens up there.”
Beach said he has been in regular contact with the company by phone. Firm members visited the site by themselves and want to return for a closer look in the summer.
Most of the property in question is owned by Terminal Railroad Association, which often prefers to lease land rather than sell, and that might prompt review of other nearby, sellable sites, Beach said.
Eventually, the state plans to extend Route 3 along different alignments north and south. There is no funding though, for phases north of the stockyard or south from the River Park Drive area to Sauget.
“I was just looking at that map the other day, blew the dust off of it, Beach said. “It’s been on the drawing board for some time but is just lacking money right now.”
The River Bridge District project is considered the final piece of major infrastructure improvements in that area that began with the 2014 opening of the Stan Musial Veterans Memorial Bridge and are continuing with the relocation of Illinois Route 3.

Poettker: No place like home to construct new headquarters

POINT: Should Medicaid recipients have to work for benefits?