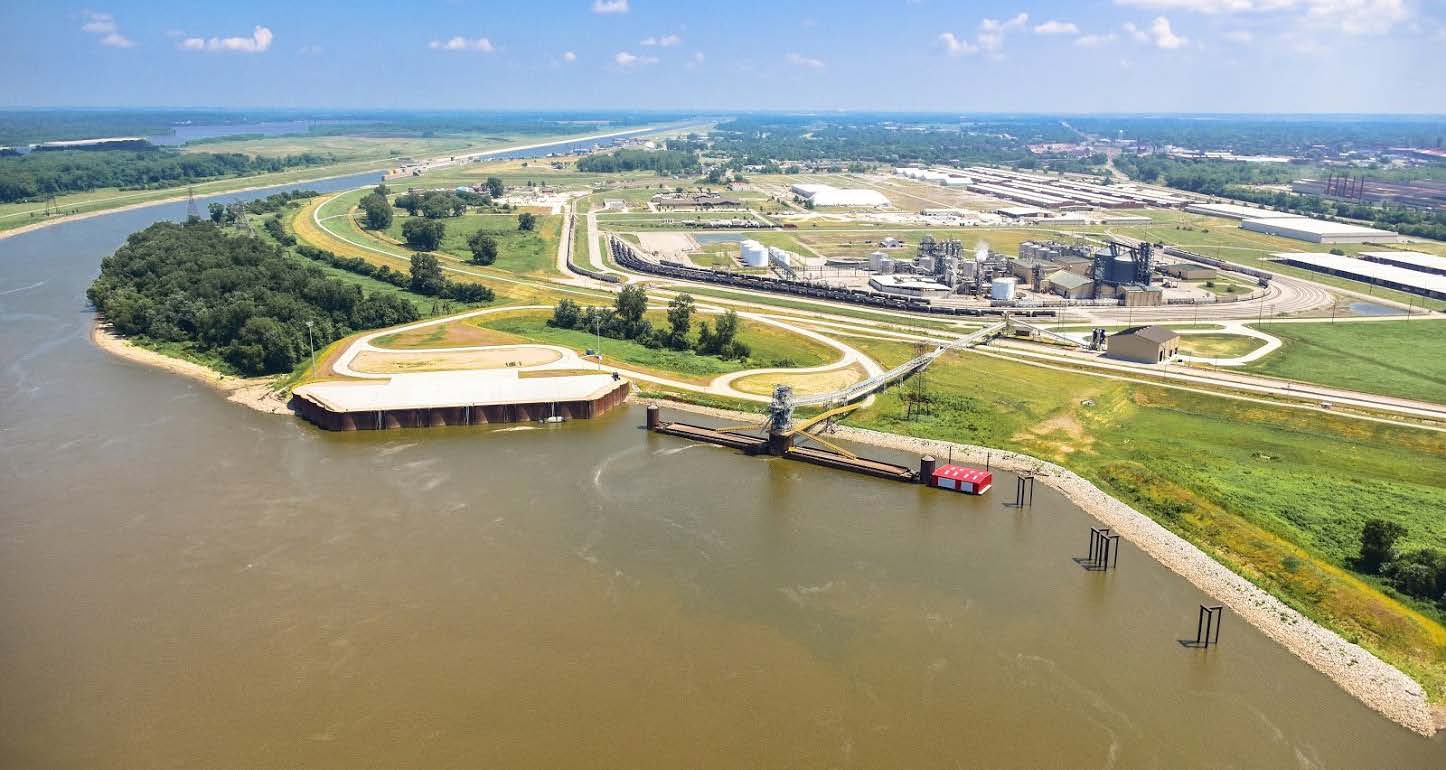 By ALAN J. ORTBALS
America’s Central Port expanded its tenant base last year with the addition of DNJ Intermodal Services, a trucking logistics company with locations in Chicago, Indianapolis, Kansas City and Minneapolis plus two in Wisconsin.
The company is located on the former golf course in Granite City where last year the former club house and restaurant were renovated and remodeled to serve as DNJ’s office building.
The port is also preparing other buildings to make them ready for occupancy, said Executive Director Dennis Wilmsmeyer. This includes rehabilitating the former steam plant to repurpose it for other uses and rehabbing a building that was transferred to the port by the U.S Army Reserve two years ago.
“This is a big building — about 58,000 square feet — and it has a 42-foot high center bay,” Wilmsmeyer said. “We’re planning for some substantial improvements in that space but keeping that same ceiling height throughout the building. There are some really great opportunities there with the potential to put rail track inside of the building.”
America’s Central Port also has plans to build upon its already extensive infrastructure. This month ground will be broken on an additional rail extension in the 60-acre site in the heart of the port’s industrial park. Construction of the spur should be complete by the end of the year.
“Hopefully, we’ll be able to use that to attract another rail-served warehouse, but in the meantime it’ll be used for transloading rail-to-truck and truck-to-rail operations,” Wilmsmeyer said. “That’s about a million-dollar project that’s being funded through grants and port funds. This is a good project made possible through the Economic Development Administration. We’ll also be building additional rail track to one of our bulk storage buildings. “That’s a building we built about a year and a half ago and we’ll also be adding a rail track and dump pit for a conveyor set up there.”
Over the next year ACP will also be adding a sixth entrance off Illinois Route 3. This will be a non-signalized, right-in, right-out intersection to provide better access to the industrial park and warehouse district.
ACP has been pursuing the container on barge business for several years and is working with others in the area to attract container-on-vessel service to the St. Louis region.  American Patriot Holdings has announced that it has plans for a terminal facility in Herculaneum, Mo.
“We fully support the American Patriot Holdings project,” Wilmsmeyer said. “We are working on a grant opportunity with the U.S. Maritime Administration for a demonstration project to move containers on barge through our Madison Harbor. We believe that America’s Central Port is at a great location to move cargo containers.”
Mary Lamie, executive director of the St. Louis Regional Freightway District agreed. She said that for the Herculaneum project to succeed it will need to operate as a hub and spoke structure and America’s Central Port would be an integral part of that system.
While the reopening of the U.S. Steel Granite City Works should add barge demand, roughly 60 percent of what moves through ACP is agriculture and agriculture related, Wilmsmeyer said.
To make the ACP even more attractive, its Foreign Trade Zone was just expanded. Merchandise may be held in the FTZ without being subject to tariffs, duties and other ad valorem taxes. This tax relief is designed to attract business and create jobs associated with international trade.
And protecting all of this investment is the American Bottom levee system. A 10-year effort to restore the levee system to meet the 100-year flood protection standard was completed last year. This $120 million project was managed by the Southwestern Illinois Flood Prevention District Council. All documentation has been submitted to the USACE and FEMA and the Council is expecting to receive accreditation in early 2019. Work is now underway to make the improvements necessary to bring the levees to the 500-year flood protection level.
America’s Central Port has nearly 2 million square feet of warehouse and industrial space, with hundreds of acres available for development.

Regional Freightway on roll with $400 million in infrastructure