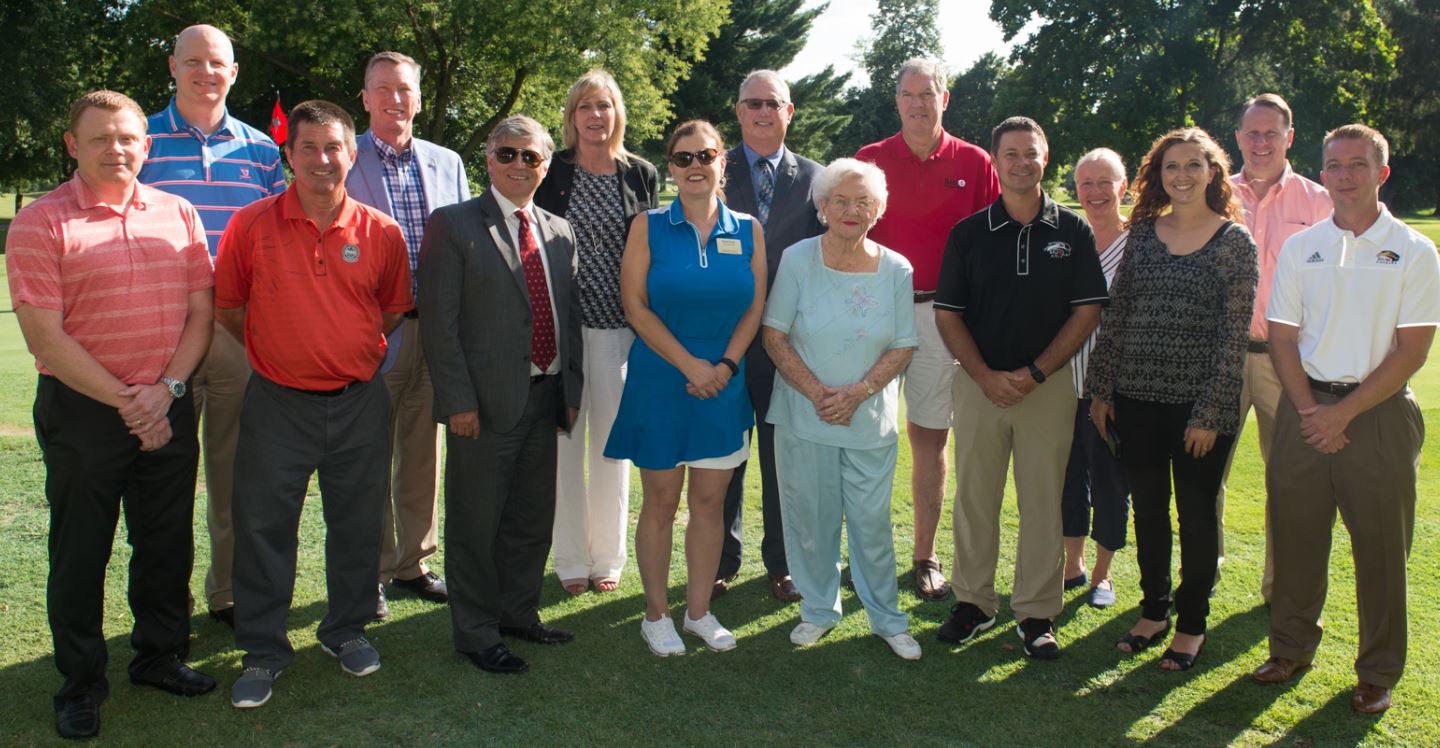 The indoor practice facility and driving range is being named in honor of legendary SIUE coach and supporter, the late Harry Gallatin, who envisioned such a first-class facility that would increase student-athlete training opportunities.

“I believe strongly that a key element in the future of higher education is the pursuit of university/community partnerships,” said SIUE Chancellor Randy Pembrook. “This is an excellent example of such a mutually beneficial approach.”

“I wish to thank key leaders at SHCC and SIUE for working together to make the practice facility a reality,” he continued. “It will be a beautiful and practical structure located within minutes of our campus, and will serve both SIUE golfers and members of SHCC well in future decades.”

Phase I of the multi-phase development will cost approximately $350,000, with its estimated completion slated for early 2019. The 2,200-square-foot facility will include three indoor hitting bays, a video training system, an indoor putting surface and the ability to open the doors to hit out into the driving range.

“This project is a great fit for both the University and Sunset Hills Country Club, and we are happy to have worked out an agreement to make the facility a reality,” said SHCC President Cory Darr, CPA. “This facility gives both the SIUE student-athletes and the SHCC membership access to an indoor facility that will allow for practice year-round. No one else in the area has this option.”

“The facility and resulting relationship will allow the University and Sunset Hills to partner to show what an amazing area we live in,” Darr added. “The University is thriving, the Club is growing and the community has a bright future on the horizon.”

Major donors who have contributed 100 percent of the project’s construction costs include John Simmons, Tom Allen, and Mike and Corey Wenzel. Other significant backers are Harry and Bev Gallatin and TheBANK of Edwardsville, along with in-kind contributors Alan Grammer and Dale Keller.

“We’re elated to see dad’s final project fulfilled at Sunset Hills Country Club,” said Jim Gallatin. “After his basketball career was over, playing and coaching golf became his athletic passion. The University and Sunset Hills combined to facilitate his efforts. Their commitment to his passion and vision is realized in this facility. We appreciate all the donors who have contributed and are proud to have this development in dad’s honor.”

“This facility is a great tribute to Coach Gallatin and will be a fantastic addition to the SIUE Golf program,” said Mike Wenzel, CPA. “Go Cougars!”

“With this development, we saw an opportunity to accomplish our philanthropic goal creatively,” added Vice Chancellor for University Advancement and CEO of the SIUE Foundation Rachel Stack. “It is my hope that the foundation can use this model to form other philanthropic partnerships in the community.”

“This is very important for us and the donors to honor the life of Harry Gallatin, and recognize the incredible impact he made on SIUE Athletics and our student-athletes, in the past, present, and now into the future,” said SIUE Director of Athletics Brad Hewitt, PhD. “We are extremely excited to see this project come to fruition. It is a win-win, both for our outstanding men’s golf program and Sunset Hills Country Club which continues to attract prospective members to its beautiful venue.”

SIUE Men’s Golf Coach Derrick Brown emphasizes the immediate impact the facility will have on his student-athletes, as it will expand their ability to train year-round and amplify their advancement as a nationally recognized team.

The Cougars recorded their highest finish in 2018, placing third in the Ohio Valley Conference (OVC). SIUE entered the 2018 tournament with the best scoring average in the OVC at 290.7.

“The features of our new facility will provide the tools for us to continue to be successful,” Brown said. “It will be great for our young men to have an indoor facility to call home that is located so close to campus. The capability to show new recruits a facility of this caliber will greatly enhance our recruitment of high-performing student-athletes.”
“We look forward to this exciting partnership with Sunset Hills Country Club and extend our gratitude to everyone who helped make this possible in honor of a great man, Coach Gallatin,” he added.