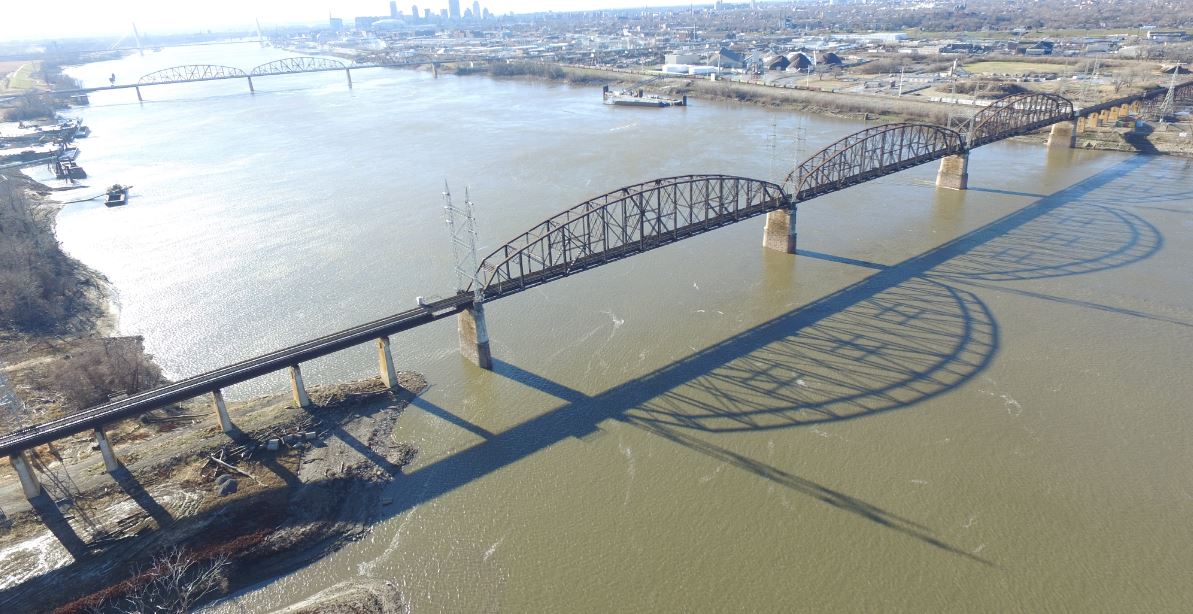 The Terminal Railroad Association of St. Louis has executed a $172 million construction contract for the rebuilding of the company’s Merchants Bridge, including its three main spans and the east approach spanning the Mississippi River between St. Louis, Mo., and Venice, Ill.

The Merchants Bridge, built in 1889 and opened in 1890, is the oldest rail structure over the Mississippi River. The project will bring the structure up to current rail standards, adding capacity to the rail system while ensuring the safety and resiliency of the national freight rail network.

TRRA has awarded the project to Walsh Construction Co., which TRRA says is one of the country’s largest and most respected construction services providers and has been recognized as the nation’s largest bridge builder for the past five consecutive years. The firm has experience in delivering high-profile structures that cross major roadways and waterways, including bridge replacements over the Mississippi and Missouri rivers.

“Walsh Construction is honored to partner with the TRRA to replace this historic structure. We look forward to working with a talented local workforce that includes companies such as St. Louis Bridge Construction Co. to improve this vital freight connection over the Mississippi River,” said Walsh’s Senior Project Manager Dan Sieve.

TRRA and Walsh Construction have agreed to incorporate subcontracting opportunities for Disadvantaged Business Enterprises as part of the project.

Earlier this month, the TRRA learned that the project was not selected for a federal grant through USDOT’s INFRA program. The TRRA and its shareholders undertook the difficult decision to fund the Merchants Bridge replacement without federal grant assistance because of the condition of that structure and the adverse impact a non-functioning bridge would have on the nation’s economy.

TRRA is working with Bank of America Merrill Lynch in St. Louis to finance the rebuilding of the Merchants Bridge.

John Beardslee, Global Commercial Banking Market executive, says the bank is pleased to support TRRA “with their important mission of restoring this symbol of our progress and heritage. This is an infrastructure project with national importance, and we are enthusiastic about its positive impact on local economic development and job creation. Along with many others in the St. Louis Region, we look forward to watching the improved Merchants Bridge take shape.”

Development Strategies of St. Louis has estimated that construction of the project will support almost 1,100 jobs in the St. Louis region, including 150 direct jobs.

According to TRRA President Mike McCarthy, “With the execution of this contract with Walsh Construction Company, we can begin the work needed to replace and update this critical link in our rail network that supports the regional and national economies. We began work on this important project in 2013 and look forward to its completion in 4 years. Modernizing this structure results in benefits for the general railroad network, shippers and the general public.”

The TRRA is a Class III railroad serving 80 industrial customers in the St. Louis region and provides interchange services to Class I railroads serving the East and West Coasts and the Great Lakes to the Gulf of Mexico. These services provide cost efficient transportation options to area businesses and is a critical hub for connecting the St. Louis region to the national and global market place.