By DENNIS GRUBAUGH
If their recent past is any indication, Julie Holdener and Benjamin Paulsen will have plenty of questions for future law clients. When it comes to client consulting, they’re among the best students in the world — with a plaque to prove it. 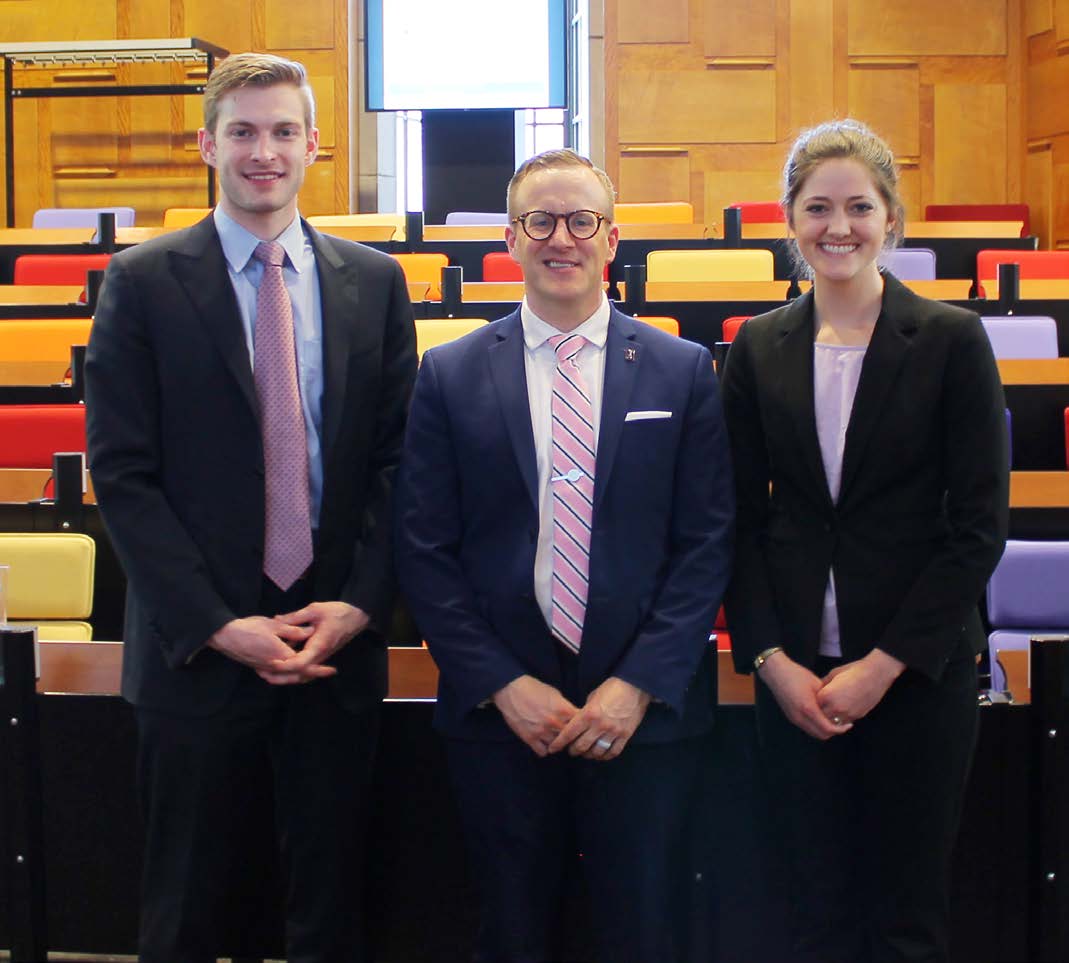 Holdener, of Mascoutah, and her college tag-team partner, Paulsen, of northern Illinois, took first place this year in the Brown Mosten International Client Consultation Competition in The Netherlands, an event not won by a United States team since 2009 and one that has never been won by students from the University of Illinois College of Law.
The achievement was three years in the making and tested the mettle of two eager students on the trail of the great law school pursuit known as the paper chase.
“We’re both very competitive,” Holdener, the newly minted law graduate, said. 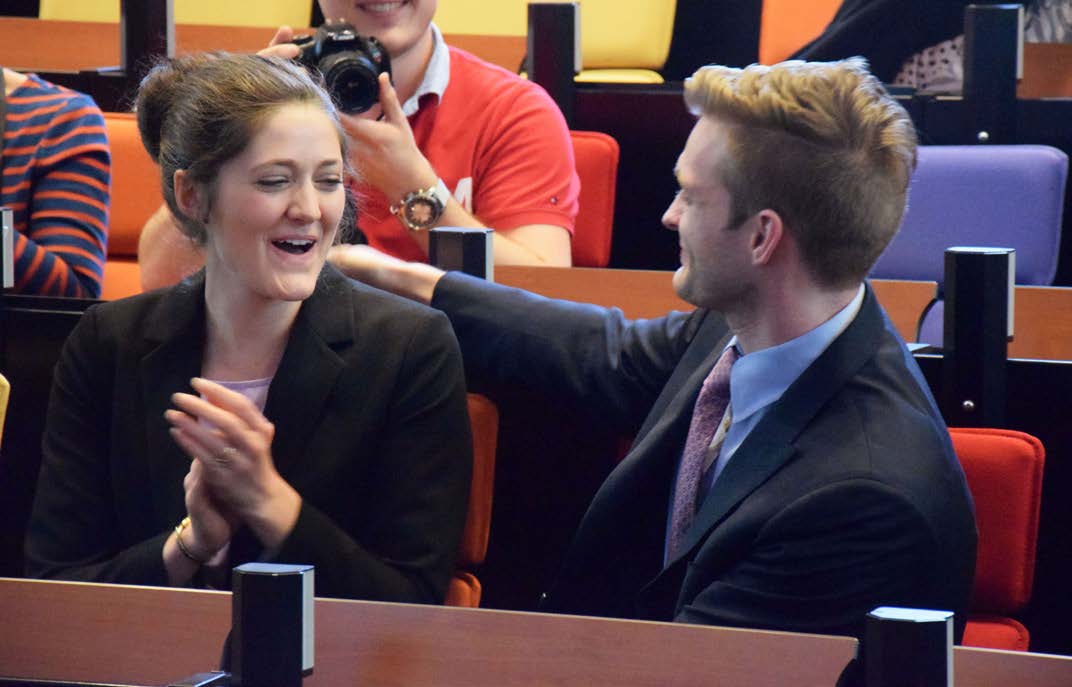 The American Bar Association conducts numerous events in which law students may compete. Holdener said she and Paulsen teamed up in their first year in school to be on the client counseling team. Law school is three years in total when done full time.
The first year of tryouts they made the school team. That allowed them to advance to competition with other schools.
“We competed in the second year and didn’t get far,” she said. “But we had fun.”
The third year, they competed in a regional event in Chicago and took first, which was a ticket to the nationals in Durham, N.C., where they also got first place. Then, it was on to the international competition in Europe where they took the world championship.
Their dedicated coach Professor James Noonan was with them all along the way.
Holdener and Paulsen didn’t know each other before college.
“We had some classes together our first semester of law school. We were like, ‘Hey, you want to do this?’ And I was like, ‘Absolutely, I’m in.’ We really worked well together and balanced each other out, which is very important for this competition,” she said.
Even after the win, though, a lot of friends wanted to know what the event is all about, and it all comes down to handling client interview scenarios on the fly — with no advance time to prep.
“The client is coming to meet the attorney for the first time, which tests an attorney’s skill. Among those are the soft skills — personality, ability to adapt, that sort of thing — and the other is legal prowess, the hard skills,” Holdener said. “How do you connect to the client? How do you make them open up to you?”
Clients don’t know the law “so you have to ask the right question,” she said. “Ultimately, you’re thinking on your feet to give a legal answer.”
All of it involves role playing, not real clients.
“It would be nice if they were real clients, but they always hire actors to come in,” Holdener said.
The scenarios vary between regional, national and international rounds, but the general rules are the same.
“Every single round the issue is different. You never know exactly what’s going to happen. But you always have 45 minutes, timed. You always go over preliminary matters that are the same every time, like confidentiality.”
During the international round, the scenario involved a band with four men whose equipment had burned the night before in a bar. They wanted their equipment — and their money. The cause was negligence.
“They claimed the guy who owned the bar was smoking a cigarette and left it on his desk,” she recalled.
One could imagine such a scenario actually happening, but the potential legal responses could vary.
“You have to listen to the client. That’s the most important thing. Some people are money hungry and want to get a big paycheck out of it. But other people just want an apology. That’s a question for the client.”
A good lawyer can’t be a client’s best friend.
“You have to tell them bad news,” she said.
The sessions are very much like the real world.  Lawyers are often told little about a case before they first meet with a client.
Holdener is studying for the Illinois bar and already has a job lined up now once she’s licensed. She is going to work for an organization called Equip for Equality, which is planning an office in East St. Louis.
“They are a statewide nonprofit that assists the legal needs of people with disabilities.  The main office is in Chicago and until now there has been only one office in Southern Illinois, at Carbondale.”
The organization will open an office in East St. Louis once Holdener joins the agency.
“I’ll help out around Southern Illinois, but just by sheer volume most of my clients will be Metro East folks.”
Working for a nonprofit won’t pay as much but it will fulfill her own mission, she said.
“I went to law school for that purpose, it was my dream and my motivation. I feel like I’ve been blessed a lot in my life and I want to pay it forward,” she said.
Meanwhile, her partner, Paulsen, is headed to a large law firm in Chicago.
The pair received a plaque, $500 each and tons of respect from their school.
Twenty-two countries were involved in this year’s international competition.  TEAM USA was seeded first after its performances in the preliminary rounds. After winning the semifinals, they competed in the finals against a team from Malaysia and a team from Scotland.
Holdener said she was continually impressed at the prowess of the competing students.
Over the last 10 years, competing law students have also been from Australia, Bangladesh, Cambodia, Canada, China, England and Wales, Finland, Georgia, Germany, Hong Kong, India, Indonesia, Iran, Irish Republic, Jamaica, Malaysia, Mexico, Netherlands, New Zealand, Nigeria, Northern Ireland, Poland, Puerto Rico, Russia, Sri Lanka, Switzerland and Ukraine. The competition is run on a not-for profit basis by an international committee of academics and practitioners.
A Client Counseling Competition for law students was first established in 1969 by Louis M. Brown. It was adopted by The American Bar Association in 1972 and the International Competition was inaugurated in 1985. The International Competition was named after Brown in 1993 in recognition of the inspiration he provided as originator of the competition.