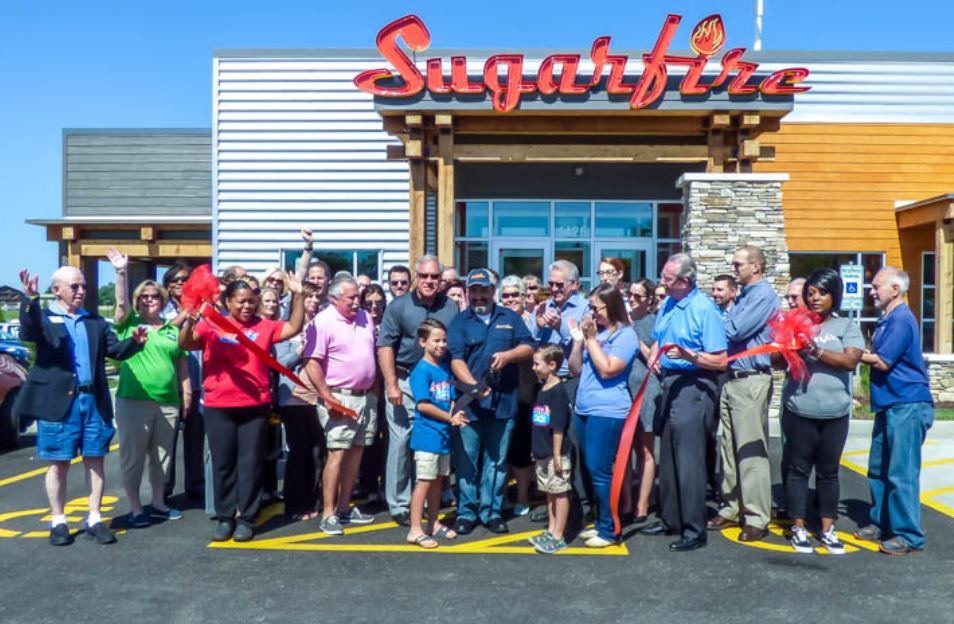 The ceremony was June 5 for the location that opened in late April at 1425 North Green Mount Road.

The restaurant is based in St. Louis, and the new location is the first in Illinois —near the new HSHS St. Elizabeth’s Hospital. Sugarfire founder and chef Mike Johnson joined forces with Gregg Medeiros, John Brauch, Tom Lombardo and Mark Pitliangas as owners. Coined “Sugarfire 64,” the O’Fallon location was the second location to open outside of Sugarfire’s home state of Missouri, with the first successfully opening just months ago in downtown Indianapolis.

The fast-casual concept opened its flagship in 2012, and since, Johnson has expanded Sugarfire’s imprint across Missouri to seven locations, including a location within the National Blues Museum, and an extensive catering program. With a background in fine dining, and training under the chef Emeril Lagasse, Johnson created Sugarfire’s menu to reflect a variety of barbecue styles, techniques and influences found throughout the United States.

Known for its brisket, pulled pork and ribs, as well as its signature sandwiches and sides, Sugarfire has been ranked best barbecue in St. Louis by local and national publications. Additionally, chef Johnson has served as a celebrity guest pitmaster and competitor in events globally, including Hogs for the Cause, the Perth Yak Ales BBQ Competition, Memphis in May, Australia’s Meatstock, The Kansas City Royal, Charleston Wine & Food Festival and the World Food Championships. Chef Johnson has also been featured on a variety of national television shows, including Food Network’s BBQ, Brews & ‘Que, Beat Bobby Flay and Beat Bobby Flay Rematch, Travel Channel’s Food Paradise, and Destination America’s BBQ Pitmasters.

“O’Fallon has given us quite the warm welcome,” said Johnson. “We had our eye on expanding into Illinois for a while and are excited to get involved in the community and continue serving up some great ‘que.”

Sugarfire 64 is open for business daily from 11 a.m. until sold out. For hiring information and/or to apply for a position at Sugarfire 64, visit sugarfiresmokehouse.com.