By DENNIS GRUBAUGH
One contractor recalls Ed Weber as the only laborer he ever knew who came to work each day with the Wall Street Journal tucked under his arm.
Weber lived a frugal life, but he had a penchant for picking stocks. His last years were spent with an older sister in a small house in Hartford surrounded by refineries.
“He never saw an oil stock he didn’t like,” Dr. Dale Chapman said.
Chapman, president of Lewis and Clark Community College, didn’t know Weber when the man showed up in his college office with his financial advisor, telling Chapman that he wanted to donate toward the school. Chapman asked him if he was thinking about an endowed scholarship.
“Actually, I was thinking about a building,” Weber told him.
The conversation led to the largest single donation from an individual ever received by the Lewis and Clark Community College Foundation — an estate valued at $3.25 million.
Weber wanted a building that would train tomorrow’s workers, giving them the kind of education he never had.
The money made possible the construction of the aptly named Edward Weber Workforce Center, which is scheduled to hold its first classes this August.
Initially, the center will be the arc connecting welders of the future with the employers who are demanding them. Eventually, the center can be expanded or adapted for multiple uses, Chapman said. A lot will depend on what the region requires in training down the road.
Weber’s life was not always easy. He told Chapman the hardest he ever worked was a full day of offloading bags of cement from railroad cars. Safety wasn’t a big part of the job.
“He came to the college with the idea of setting up a center to train the workforce of the future, particularly in safe ways to work,” said Travis Jumper, an assistant professor and coordinator of Welding Technology.  “When he started as a laborer, they didn’t really worry about safety.”
Sadly, Weber, who was well into his 80s, didn’t live to see the project become a reality; he died in July 2015, before the ground-breaking even took place.
“He got to see some of the plans early on, but he never lived to see it come to fruition,” Jumper said. 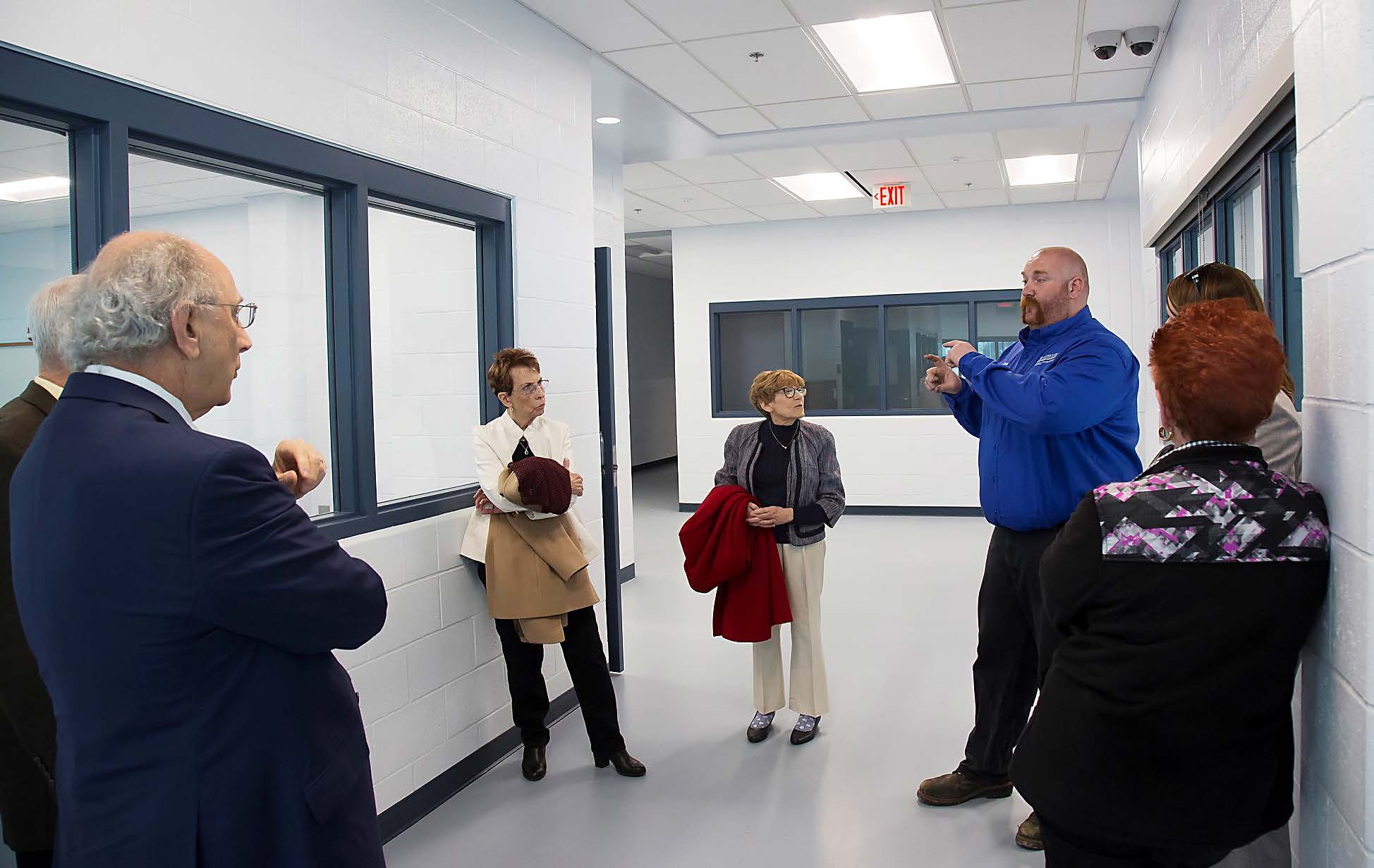 The Weber Workforce Center is envisioned as the first phase of a complex that can evolve or expand over time. Initially, the programs will be devoted to welding and welding-related curriculum.
The college had a welding program for many years but discontinued it the early 1990s, except for two classes where a high school student could get a certificate. Otherwise students, had to go to one of the other community colleges or tech schools, Jumper said.
With the help of a couple of federal grants, welding restarted in 2012 in a shed at the rear of the college’s Maintenance Department. That always was looked upon as a temporary location until something permanent came along.  Welding Technology has developed into one of LCCC’s largest workforce programs.
The general contractor on the project is Bruce Unterbrink Construction out of Greenville.
The Weber building will feature three classrooms for welding, offices, and a main shop area estimated at 120 by 70 feet. One of the classrooms will feature computer-aided design — or CAD — software that can be used for many applications.
On the north end of the building are two smaller shop spaces, one for “oxy fuel cutting and grinding” — the heavier, dirtier part of welding — and the other will be reserved for “clean testing,” Jumper said. Destructive and nondestructive weld testing equipment will be found there.
Inside the shop will be 30 welding stations, double what LCCC now has. At each of these stations, students will be exposed to a variety of welding processes. Jumper uses terms like MIG and TIG (different types of inert gas arc welding), flux cored welds, air arching and plasma cutters.
“We can do any of those things in the shop,” he said. “The rest of the main shop is devoted to fabrication tooling.”
But, again, safety is a central part of curriculum. Welding is a potentially dangerous craft.
“It can be,” Jumper said. “When you’re stick welding for instance, that molten puddle is 7,000 degrees on average. It’s not something you want to stick your finger in without some gloves. I’ll spend two to three weeks in the first class on safety.”
Hazardous environment is also addressed in the new building, which features a sophisticated filtration system that’s better than one in most hospitals, he said.
“Our ventilation system sucks up the fumes while the students are welding and the fumes get put through two sets of filters. When it comes out the back side it pumps the air right back into the shop. The air coming out of the filtration system is cleaner that the air pumped into an ICU unit.”
“In theory” and by properly utilizing the space, Jumper said seven classes of students could be accommodated at one time throughout the building.
Expansion of the building to the west is a possibility and for uses other than welding, one of the reasons why the building is named Workforce Center, rather than simply welding center.
Jumper is a certified agriculture teacher, but he’s been around welding much of his life.
“I used to teach agriculture at Jacksonville High School. Before I came here, but I’ve been teaching welding pretty much since I got out of Carbondale (about 10 years ago),” he said.
The trade is very much in demand.
“Most of my graduates have at least five or six job offers when they graduate. If any of my students go look for them, they can find them. I’ve got companies all over the area calling me, saying they need five, 10, 20 (welders). GBW in Wood River, the big ‘golf ball,’ it’s not uncommon for them to be hiring 20 at a time,” he said of the well-known railway repair dome.
Any business that deals with metal fabrication needs a welder, and the trades are loaded with them, pipefitters, boilermakers, carpenters, steamfitters and iron workers among them. Businesses also need welders for maintenance
“There’s a whole gamut that they can go into,” Jumper said.
His students go all over the world.
“I’ve got a girl now who’s welding for MB&S, which rebuilds turbine blades for power generation plants. She’s in the Dominican Republic. I’ve got another guy who moved to the state of Washington as a maintenance man. Another alum travels all over building radio towers.”
The hours can be long, with some people working around the clock on some projects.
Most of his students will make anywhere from $10 an hour to $32 an hour.
Not everyone is interested in work. Some are wanting to fulfill a hobby. Jumper’s oldest student was 89 years old and had repaired Willys Jeeps during World War II.
“We taught him how to do body work on a Jeep,” he said.
Part of the demand is driven by retirements.
“According to the Bureau of Labor Statistics, the average age of a welder right now is 56,” Jumper said.  For a long time, there was a push for high school students to go get a four-year degree. As a result, all the blue-collar jobs — the welders, the machinists, the auto techs — there was nobody pushed into that field to feed the system. There was a big lull of people going into those industries. Now, a lot of these guys are getting ready to retire and there’s nobody there to fill those spots back up.”
LCCC will keep the welding courses it now offers but add more.
“Right now, we have an associated degree, a certificate of proficiency and nine certificates of completion, which are designed for particular areas of welding,” he said.
At the time of the IBJ interview, only final touches were needed to the building and the move will then begin from the old to new welding facilities.
Chapman has said that Weber’s gift allows the college to match a federal Title III endowment challenge gift that creates a $500,000 building endowment, which will annually provide interest funds aimed at supporting the ongoing operations and maintenance of the building. That keeps the impact of adding the new building off the college’s operating budget and off district taxpayers.