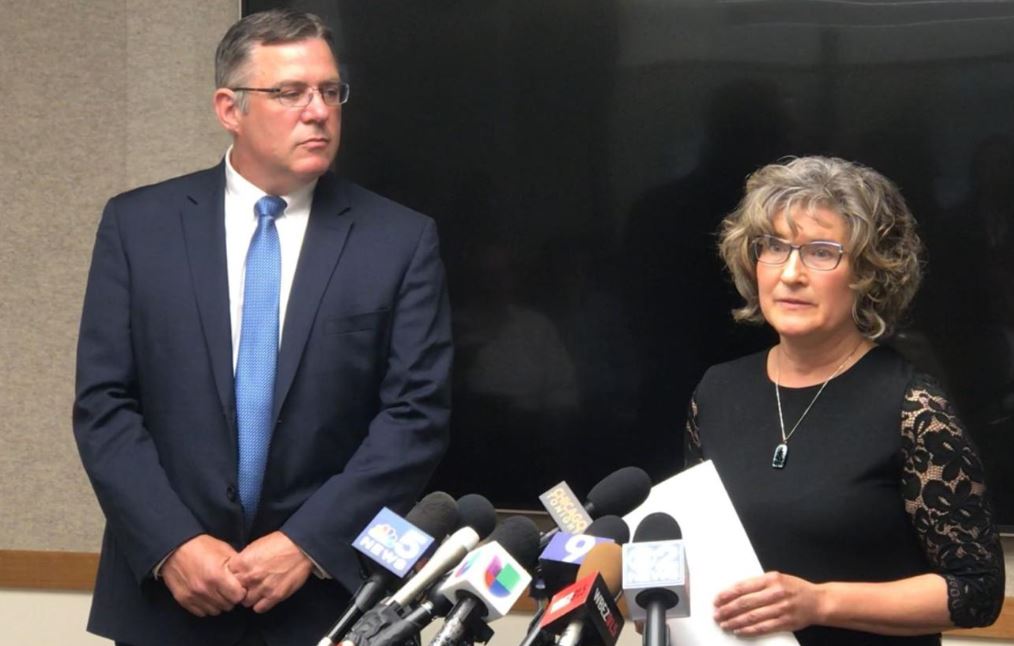 Sherri Garrett, an account technician and minutes clerk for the Speaker’s office, recounted years of sexual comments by Madigan’s Chief of Staff and Clerk of the House Tim Mapes during a news conference Wednesday morning in Chicago. Mapes is the third person within Madigan’s operations who has been publicly named in accusations of inappropriate behavior.

“They should be held to the highest standard,” Garrett said. “Instead they behave like they’re above reproach and like the Speaker’s office is like a locker room.”

Garrett said she planned to file a complaint with the Legislative Inspector General after a news conference Wednesday in Chicago.

A Springfield resident who said she carries the Speaker’s gavel to the podium before every day of session, Garrett decided to come forward because of what she described as a serious and pervasive problem in state government.

“I’m just someone who decided it was time to come forward,” Garrett said. “But there are all kinds of people that are behind me right now that you cannot see that are too afraid to come forward.”

“[Mapes] has an inordinate amount of power in this state,” Garrett said in a statement. “And the Speaker’s Office, which he helms, is charged with leading the effort to reform the system to address concerns like mine. They should be held to the highest standard.”

“We want to do our jobs with dignity and we want to go home at the end of our day,” Garrett said, “But instead we have a culture of sexism, harassment and bullying that creates an incredibly difficult work environment.”

Mapes resigned Wednesday afternoon as Madigan’s chief of staff, clerk of the Illinois House of Representatives and executive director of the Democratic Party of Illinois at speaker’s direction. He also resigned from “all other roles with my political committees,” Madigan said.

“Regarding Ms. Garrett’s concerns shared earlier today, neither I or the House Democratic Ethics Officer had been made aware of Ms. Garrett’s complaints against Tim Mapes,” Madigan said in a statement.

The House Speaker said a change in culture was needed.

“I have stated my commitment to eliminating harassment of any kind in the Capitol, as well as all political committees, and my desire to ensure we create a culture where individuals feel secure in making a complaint,” Madigan said in the statement. “I intend to appoint an individual with extensive experience conducting investigations to review all operations of the House of Representatives, including but not limited to the Clerk’s Office where Ms. Garrett works.”

At the news conference, Garrett said she was nervous to go back to work after making the announcement. Her attorney, Ed Mullen, said he’s confident there won’t be attempts at retaliation against Garrett within the Speaker’s office.

“We don’t believe that they will do that,” Mullen said. “We believe that by her coming public, she’s going to be protected by that type of retaliation that she might have otherwise suffered.”

While Garrett said she will file the complaint with the LIG, she said she doesn’t trust the current process. She hopes changes to the process set to be sent to Gov. Bruce Rauner for consideration make the process more fair. Right now, she said Madigan has too much sway over the process.

Until his resignation, Mapes was executive director of the Democratic Party of Illinois, of which Madigan is chairman.

Garrett laid out a series of specific allegations in a news release.

In one, she said former state Rep. Ken Dunkin approached her and another woman on the House floor and said, “I want to take both of you home and see which one will be the naughtiest.”

Garrett said she reported the inappropriate comment, but heard later that Mapes’ response to it was, “It will blow over.”

“He had to be forced to address the situation by a staff member,” she said.

A phone call and email to Dunkin were not immediately returned.

Other allegations detailed by Garrett:

– Mapes not taking appropriate action to address allegations of inappropriate statements made by a state representative in 2013.

– Mapes dismissing concerns raised by another employee through Garrett where Mapes allegedly said Garrett was only making it an issue “because you are upset the Representative isn’t paying attention to you.” Another colleague was present, Garrett alleges, and that person was also taken aback by the comment.

In April of 2018, Garrett said Mapes came on the House floor and was heard saying to a colleague: “Are you going to sex training today?,” referring to sexual harassment training. Garrett said Mapes was “making light of the training, even in this moment, in which this training is so critical.”

“These are just a sample of the many stories I could tell from my years of working in the speaker’s office,” Garrett said. “This is very difficult for me. I carry the speaker’s gavel to the floor every day that we’re in session. I have a sincere loyalty to him, but have felt disappointed in his administration’s handling of cases like mine. I have not felt like I have had a safe path to report my experiences.”

Mapes is the third person within Madigan’s operations who has been publicly named in accusations of inappropriate behavior.

Earlier this year, former political staffer Alaina Hampton alleged Madigan’s operation covered up sexual harassment accusations she brought forward against Madigan operative Kevin Quinn from the 2016 election cycle. Hampton said Madigan’s operation retaliated against her by not allowing her to advance in the organization. Quinn was fired from the organization only after the story was set to break in Chicago media.

Madigan’s team this week requested Hampton’s federal lawsuit against the Democratic Party and other Madigan organizations be dismissed.

Another Madigan political operative, Shaw Decremer, left the organization earlier this year after allegations of harassment in a different political campaign.

After those allegations, Madigan held a news conference in February giving general information on allegations within his statehouse office including harassment, unwanted advances, retaliation, intimidation, creating a hostile workplace and discrimination over the past five years. Madigan’s office conducted the internal review. He encouraged other legislative leaders to do the same.

Garrett said Wednesday that the announcement of nine different incidents Madigan self-reported was troubling. While she doesn’t think her case is one of those, she felt Madigan putting that out in the media was a form of intimidation.

Mapes was recently part of another alleged campaign of intimidation last month. State Rep. Kelly Cassidy, D-Chicago, said Mapes called her former part time employer at the Cook County Sheriff’s office asking about her employment status. Cassidy said that was “chilling” as she was a vocal critic of Madigan’s handling of harassment issues under the dome and within his office and political operations.

State Rep. Lou Lang, D-Skokie, resigned from several leadership positions last week after being publicly accused of harassment, inappropriate behavior and retaliation by a former medical cannabis advocate. Lang called the allegations “absurd” and said he would seek another term in November. Lang also left his spot on the Legislative Ethics Commission, which investigates wrongdoing by lawmakers.

PHOTO: Sherri Garrett, an account technician and minutes clerk for the Speaker’s office, alleged years of mistreatment by Madigan Chief of Staff and Clerk of the House Tim Mapes during a news conference in Chicago on Wednesday, June 6, 2018. John Spataro | Illinois News Network