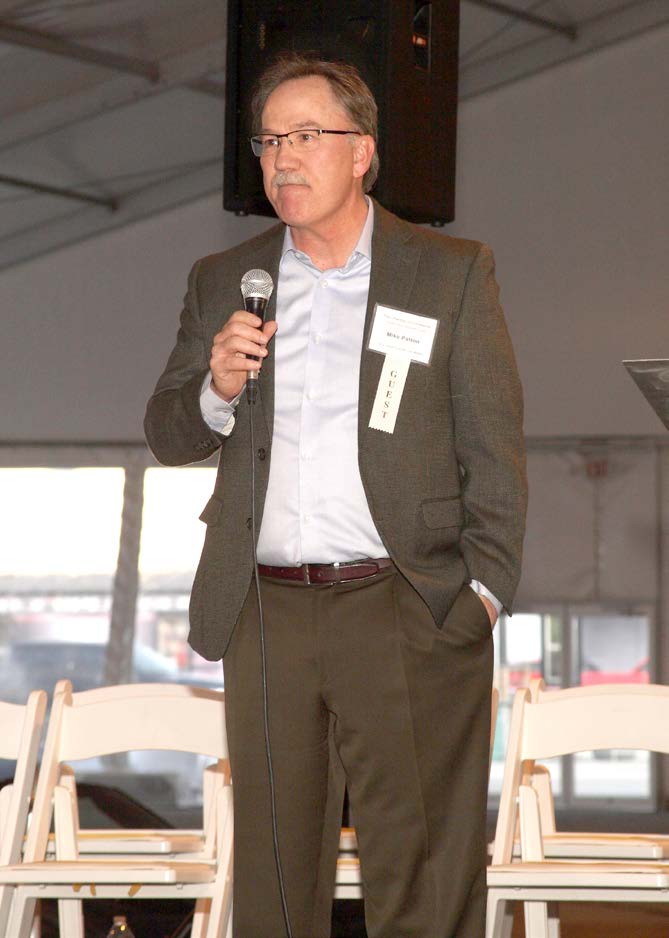 By DENNIS GRUBAUGH
Resurrection of some processing units and the return of workers at U.S. Steel’s Granite City Works have the plant’s manager optimistic about the future.
Businessmen got a rare bit of insight into the company’s plans when Michael Patton spoke to a crowd assembled for the Business and Industrial Appreciation Evening held in April at Gateway Motorsports Park, sponsored by the Chamber of Commerce Southwestern Madison County.
Patton said he was sitting in his management office at the USS Minntac steel plant in Mountain Iron, Minn., when he received the call in April 2016, and “the opportunity to come back home” to Granite City.
The return was bittersweet because the plant was down more than 1,000 employees, laid off when much of the plant was idled in December 2015.
“I am from Granite City,” he said. “I actually grew up two doors down from Fornaszewski’s Music Store. I used to look at the steel plant growing up.”

The restart of what’s known as the B Blast Furnace, an ironmaking facility, should be done in June. That facility had actually been rebuilt just prior to the idling of the plant in 2015.
“That means we’ll also start our BOF shop and our new, $100-plus million casting machine, which is the first- or second-most capable casting machine in the United States of America, which is one of the big advantages that we have,” Patton said.
When Patton returned to the mill in 2016, there were only 370 workers. By the time the company announced this year that it was reopening the blast furnace, there were 700-plus in the complex because the company had brought back hot strip mill operations in February 2017.
“Our intentions are to land somewhere in the 1,200 to 1,300 range with steelworkers and a little over 100 managers,” he said.
“We’ll probably make 1.4 to 1.5 million (net tons) in steel production with the one blast furnace,” he told the audience.
“We also plan to continue to bring in big slabs from our Gary, Ind., facility as well as our Mon Valley (works) facility in Pittsburgh,” he said.

Before the idling, Granite City Works was producing hot-rolled, cold-rolled and coated sheet steel products to customers in the construction, container, piping and tubing, service center and automotive industries.
“We’re back and we’re coming back,” Patton said of the company. “My intentions — and the intentions of 13 others (managers) — are not to go through the layoff again. I am very confident we can make it happen.”
Patton started his steel career at Granite City Steel in June 1988, as a maintenance engineer.
He has worked across all facets of the business within the Granite City Works complex. In 2007, he moved to Northwest Indiana at USS Gary Works in the capacity of division manager of Tin Products. He took the plant manager job in Minnesota in 2010.
On a related note during the evening, the crowd was told of a new Granite City general manager at SunCoke Energy, Matthew Lester. He replaces Don Vichitvongsa, who had been extremely active in the community.
Lester has been employed with SunCoke Energy for 12 years.  He began with the company as an engineer at SunCoke’s Jewell operation in Vansant, Va.  He continued on to SunCoke’s Middletown, Ohio, plant, accepting the role of operations manager.  Matthew joined the Granite City facility in September.
SunCoke Energy has been a producer of coke for approximately 55 years. It operates metallurgical coke plants in Granite City; East Chicago, Ind.; Franklin Furnace and Middletown, Ohio; Vansant, Va.; Vitória, Brazil; and Odisha, India. The facilities produce more than 6 million tons of coke each year.